The explosion occurred around 10:50 a.m. (local time) and caused severe damage to the hotel infrastructure, as well as other damage to neighboring buildings. According to preliminary data, the explosion left 26 people dead and more than 60 people hospitalized. In addition, investigations point to an accident as the cause of the incident. 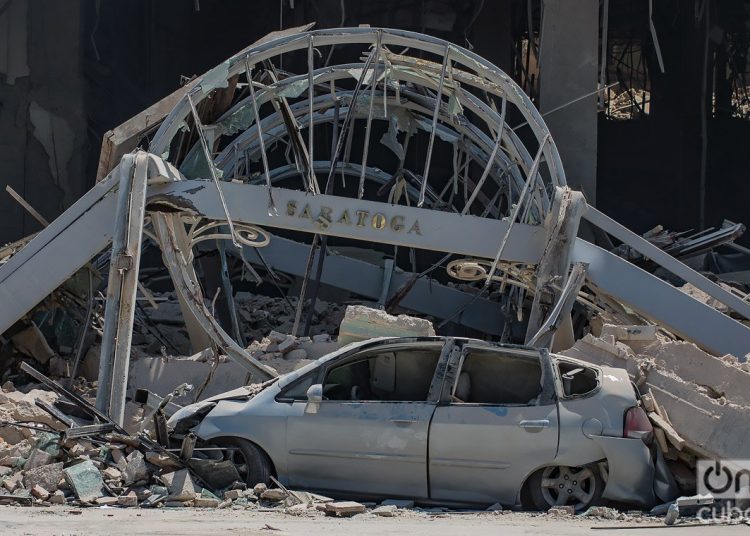 A strong explosion seriously affected the Saratoga Hotel in Havana this Friday, according to official media reports. Preliminarily, 26 deaths and more than 60 hospitalized are reported.

In addition, the investigations point to an accident as the cause of the incident, related to a gas leak. According to the authorities, investigations will continue in order to determine the details of the accident, and also evaluate the condition of the hotel and the rest of the affected buildings in order to determine the next steps to be taken.

The explosion occurred around 10:50 in the morning (local time) and caused the collapse of part of the building’s façade, also affected by a fire that generated a large column of smoke, EFE news agency reported.

Explosion at the Saratoga Hotel, Havana, May 6, 2022. Photo: Otmaro Rodríguez

Emergency teams, firefighters and soldiers traveled to the scene, where the country’s highest authorities also attended, including President Miguel Díaz-Canel, who this morning was visiting a community in the Havana municipality of Marianao, according to another note from Cubadebate.

The Twitter profile of the Cuban Presidency affirms that “preliminary investigations indicate that the explosion was caused by a gas leak.” According to that source, First Secretary of the Communist Party in Havana Luis Antonio Torres Iríbar stated that so far the death of four people had been confirmed and 13 remained missing.

However, as the day progressed, the number of fatalities and injuries increased. Already in the afternoon, after a government meeting on the subject, 18 deaths were counted – 17 adults and one child – as well as 50 adults and 14 minors hospitalized, most of them with multiple traumas and several of them in critical and serious condition. Later, four more deaths were reported, bringing the number to 22.

At that time, 10 adults and three children had undergone surgery for injuries sustained in the incident, while the identity and other details of the victims had not been disclosed, although health authorities said that work was underway.

Torres Iríbar said that the search and rescue work continued at the hotel, “where it is still possible that there are people trapped” and that everything indicated that “the explosion was caused by an accident.”

He also said that the people in the building next to the hotel were evacuated and that decisions would be taken “to know where they will go until the damage is repaired”. He added that “specialists from the Ministry of Construction are evaluating the building to determine whether it can be repaired or whether other measures should be taken”.

After the government meeting, President Díaz-Canel reiterated that the families whose homes were affected were moved to “safe places while recovery actions are being carried out”, and that “the children of the elementary school that was affected will be relocated to other educational institutions in the area, which will allow them to attend classrooms on Monday”.

Among the neighboring buildings affected were residential buildings and the Concepción Arenal elementary school, explained Havana authorities, who reported broken glass in the National Capitol as a result of the shock wave.

Also affected are the Martí Theater, which was severely damaged in its exterior and interior, and the El Calvario Baptist Church, where apparently no casualties were reported, according to publications on social networks.

The authorities have denied the possibility of sabotage as the cause of the incident. The Cuban president himself, who also visited hospitals where the injured are being treated, confirmed that the explosion was not due to an attack.

Alexis Acosta Silva, mayor of Old Havana, quoted by Cubadebate, commented that “a liquefied gas tank was being set up in the hotel. The cook smelled gas, checked the connections and discovered that there was a crack in the supply hose.”

“That was what caused the explosion. The hotel was closed and only service workers were inside,” he added. The latter has also been confirmed by authorities from the island’s Ministry of Tourism, who said that the facility was preparing to restart its operations, so it had no guests, but that some of its officials were there.

According to the official media, the injured were transferred to health centers near the scene, such as the Calixto García and Hermanos Ameijeras hospitals, where they are being treated urgently and “all the resources for this are available.”

Numerous people inside and outside of Cuba have expressed their dismay at what happened and have offered their condolences to the families of the victims. Also, many volunteers have come to donate blood for the injured, according to testimonies on social networks.