On behalf of the authorities and the Cuban people, Soberón thanked the donations received, of which, he said, “all have arrived and have had a positive impact on the fight against COVID-19,” and denied that the Cuban authorities reject or hinder sending international aid. 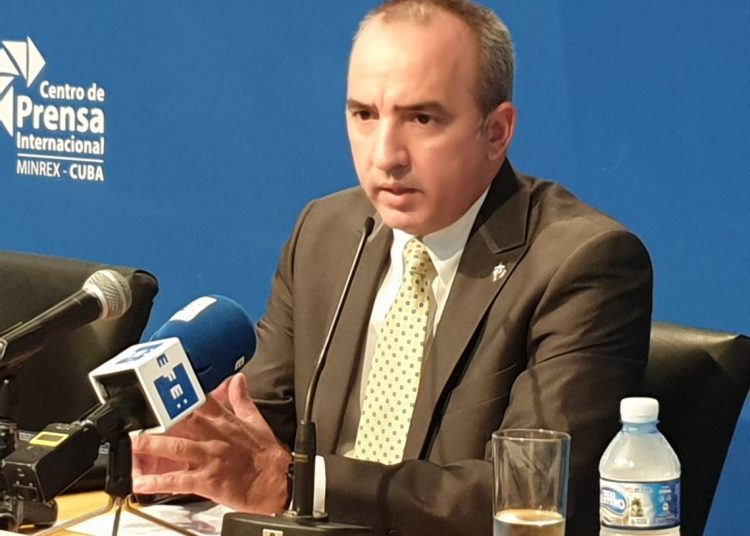 At a time of its worst moment of the entire pandemic, with more than 6,000 daily infections in recent days, Cuba remains open to receive international donations to face COVID-19. This was confirmed by Ernesto Soberón, Director of Consular Affairs and Cuban Residents Abroad of the  Ministry of Foreign Affairs (MINREX).

“The mechanisms already exist and work,” Soberón said in statements to the press on Saturday afternoon, in which he recommended that people interested in donating contact Cuban embassies and consulates throughout the world, to obtain information in this regard and coordinate aid to the island in this way.

The official specified that these mechanisms have already been used previously in other exceptional situations, such as hurricanes and the tornado that hit Havana in 2019, and also since the coronavirus got to the country.

He explained that since the beginning of the pandemic, Cuba has received more than 500 donations from governments, organizations and other foreign entities, as well as from Cubans living abroad. To date, the latter, either through associations or individually, have sent more than 5 million syringes for COVID-19 vaccination, as well as around $800,000 worth of masks and other supplies, and are currently organizing another 13 donations from 33 countries.

On behalf of the authorities and the Cuban people, Soberón thanked the donations received, of which, he said, “all have arrived and have had a positive impact on the fight against COVID-19,” and denied that the Cuban authorities reject or hinder sending international aid. At the same time, he denounced the existence of a “disinformation campaign” that, he said, tries to discredit the Cuban government and confuse Cubans living abroad and world public opinion.

Regarding the calls from outside the country to create a “humanitarian corridor” or to carry out “humanitarian interventions” to help the island in the face of the strong wave of COVID-19, which have been supported by celebrities and Internet users from several countries, the diplomat pointed out that these concepts “are associated with situations in conflict zones and serious violations of international humanitarian law, which have nothing to do with what is happening in our country today.”

Soberón explained that although many Cuban embassies and consulates abroad do not have the conditions to store donations, their officials are in contact with donors and campaign organizers to give way to these initiatives and connect with them other people interested in participating. Also to advise on the needs, requirements and other details to take into account.

“All this is maintained today,” the diplomat reiterated, in the midst of a situation that he recognized as “very complex” on the island and the logistical and transportation difficulties at the international level, despite what, he said, “work continues intensely” to expedite the donations that wish to be sent to the country.

Even though the complex health situation on the island increases the interest of Cubans abroad to send donations, Soberón estimated that the existing channels can respond to that demand. “And if at some point we reach the situation where the mechanisms are exceeded, we are sure of what we are going to resolve. But today we are not in that situation, and all the help that has been offered has been processed, it has been arriving and there are no complaints from the donors who have sent it,” Soberón replied to a question from OnCuba.

In the case of monetary donations, the official recommended using the account set up by the Ministry of Foreign Trade (MINCEX) for this type of donation, while, along with contact with the island’s different diplomatic headquarters, he offered as an alternative to people interested in donating the email [email protected], for information or to channel their interests on this matter.

Faced with the island’s difficult epidemiological scenario, which is coupled with the serious shortage of medicines and basic products, numerous people and organizations have joined international campaigns to help the island and send aid, especially to the province of Matanzas, which has become the epicenter of the pandemic in the country and is on the verge of a health collapse due to the uncontrolled increase in cases of COVID-19.

In addition, for donations within the island, organizations and civil society groups have set up various collection points, such as the Martin Luther King Memorial Center, the Clandestina design store, the Christian Center for Reflection and Dialogue or the Faculty of Economics of the University of Havana.