As reported on Twitter by Cuban Minister of Public Health Dr. José Ángel Portal Miranda, “a first search in the area” of the incident concluded this Monday, after which the main actions began in the laboratories. 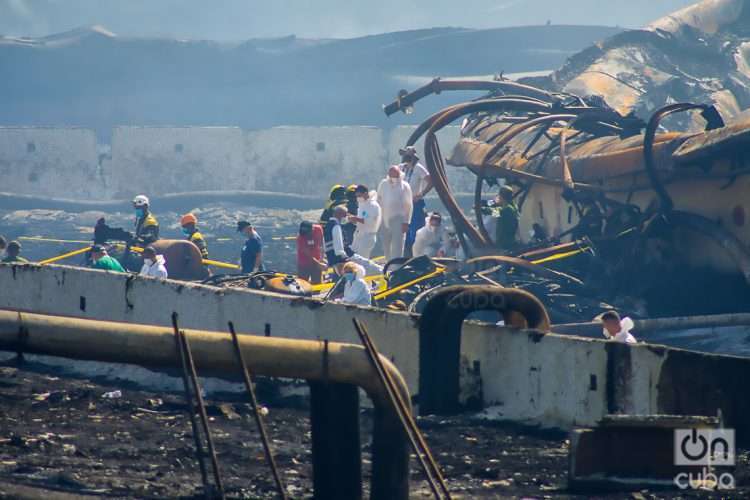 Work of forensic experts at the scene of the fire at the Matanzas Supertanker Base. Photo: Otmaro Rodríguez OnCuba Archive.

The Cuban forensic experts working in the search and identification of the remains of those who went missing in the fire at the Matanzas Supertanker Base concentrated their work this Tuesday in the laboratory, according to official sources.

As reported on Twitter by Cuban Minister of Public Health Dr. José Ángel Portal Miranda, “a first search in the area” of the incident concluded this Monday, after which the main actions began in the laboratories.

There “work is being done on the characterization and classification of each of the bone fragments found, for which all the details are being analyzed and described, with the purpose of looking for signs that allow their identification,” he explained.

In the same way, added Portal Miranda, “the evaluation of the objects that have appeared in the different quadrants of the search area continues, to establish their possible correlation with some of the missing.”

The work in the laboratory was “the priority” this Tuesday, confirmed the minister, who reiterated that the specialists would dedicate themselves to the “study of bone fragments and found objects”

According to official figures, there are 14 missing persons, their identities have been publicly revealed by the government this Thursday.

They are mainly firefighters who worked at the site when a large explosion occurred in the early hours of last Saturday, several hours after the fire broke out in the first of the four tanks that were finally damaged.

As a result of the disaster, 132 people were injured, of which 18 remain hospitalized in Havana and Matanzas. Of them, four remain in critical condition, five in serious condition and nine in care, while 112 had already been discharged by Tuesday morning.

Until the search work in the fire area is completed and the identity of the remains found can be determined, the official death toll in the tragedy remains two, both firefighters who were fighting the flames when they lost their lives.

The fire at the Matanzas Supertanker Base is considered by specialists to be the largest incident of its kind on the island. The incident occurred just three months after the explosion at the Saratoga Hotel in Havana, a tragedy that left the unfortunate balance of more than 40 deaths.