The remains belong to 14 men, half of them presented by Granma newspaper as officers or soldiers of the Fire Brigade. The official information does not specify their ages, although it does include their names, photographs with their faces, and their provinces of origin. 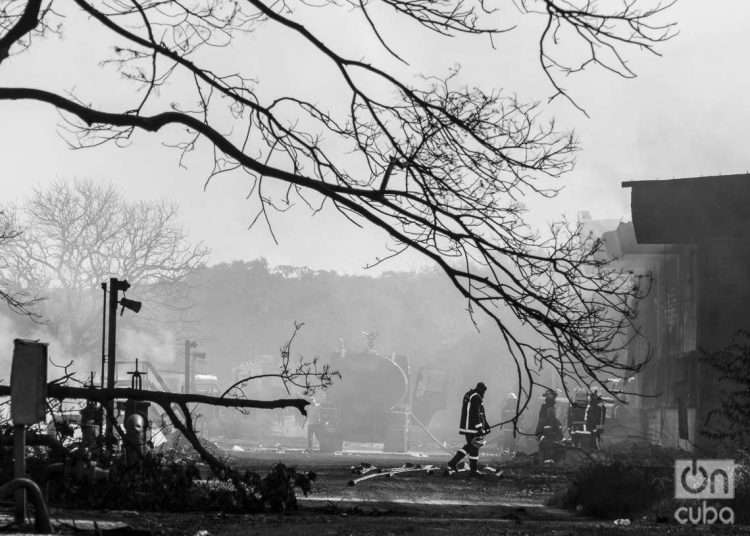 Firefighters after extinguishing the fire at the Matanzas Supertanker Base. Photo: Otmaro Rodríguez.

Cuban official media revealed on Thursday the identity of those missing as a result of the fire at the Supertanker Base in Matanzas.

The remains found correspond to 14 men, half of them presented by the Granma newspaper as officers or soldiers of the Fire Brigade – a captain, a first lieutenant, a first non-commissioned officer and four soldiers – while of the remaining ones their profession or the work they performed in the confrontation with the flames is not detailed.

Their ages are not specified either, although there are photographs with their faces, which confirm the predominance of young people among the victims and also the presence of older people. In addition, their provinces of origin are informed: six were from Matanzas, four from Mayabeque and the same number from Havana.

Although their identities were already known to the authorities, their companions and the specialists who worked in the search for the remains, it is now that their identities are officially made public for the first time, almost two weeks after the beginning of the fire and the explosion that occurred hours later in which it is estimated that they lost their lives.

Unofficial media, as well as relatives and other people had revealed some names and photos on social networks, but so far neither the government of the island nor the state media had done so. On the other hand, they did report the identity of two other dead firefighters who were not in the group of missing persons: a 62-year-old from the province of Cienfuegos, whose body was found at the site of the accident, and another 24-year-old from the province of Granma, who died in the hospital as a result of the burns suffered.

The publication of these 14 names coincides with the official day of mourning decreed by Cuban President Miguel Diaz-Canel in honor of the victims, after the team of forensic experts confirmed yesterday that it was not possible to achieve absolute identification of the bone fragments found in the area of the fire.

Moreover, the identities have been officially revealed one day before the funeral honors, scheduled for this Friday in Matanzas. There, the public tribute was held at the Firemen’s Museum, starting at 10:00 a.m., while a family burial ceremony was scheduled for the end of the afternoon at the Matanzas necropolis.

OnCuba reproduces the list published Thursday by the official press and reiterates its condolences to his relatives, colleagues and friends.