Havana in times of coronavirus: (un)common scenes with facemask

While many Havana residents try to exercise extreme care and act responsibly in the face of the coronavirus pandemic, others, whether out of necessity or carelessness, continue to take risks day after day. 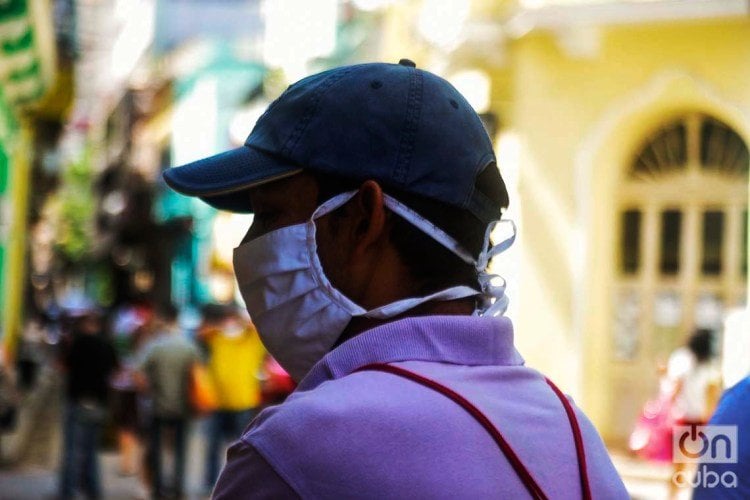 Orlando walks slowly down Reina Street. At more than 70 years old, his legs don’t allow him to walk too much, but, although he could now, he tells me, he prefers to walk without haste and save his energy for the return, or for when he needs to evade some crowds or group of passers-by who continue as if nothing were happening, despite the COVID-19 pandemic that is ravaging the world and has an increasing number of cases on the island.

He is going to the bakery. He is wearing a cloth facemask and carries a bag, also made of cloth, in one hand. “It was made by my wife,” he explains, “who knows how to sew and has also made facemasks for several neighbors and friends, even though she hasn’t been shown on television.”

The bag, for the moment, is empty, but Orlando is confident that it can change that situation. In addition to bread, he plans to buy vegetables and tubers from a man selling them from a cart and some meat product in a store that is on his way. “Even if it’s mincemeat or sausages,” he says, “because to buy chicken you have to face a tremendous bunch of people and that right now is a little dangerous. Who knows where and with whom all those people in the line who get near you have been, no matter how much they are told they must keep their distance, and I’m too old to run the risk.”

This retiree from Centro Habana is not the only one who thinks this way these days. The streets certainly seem less crowded than usual and, from time to time, police are seen in the main streets or trying to organize a line, not always with luck. There are also cars with loud speakers warning the population about the danger posed by the disease and ask, even as a favor, that the measures established by the government be followed.

But, nevertheless, there are more people than one would suppose, almost all with facemasks and bags or backpacks, despite the continuous call from the authorities to stay as long as possible at home to prevent or, at least, minimize the transmission of coronavirus.

“If I stay at home, how do I get food,” Belkis, 52 and divorced, asks me. “My parents are old and I can’t be exposing them, and my son had his classes suspended at CUJAE and I almost have to tie him up so that he doesn’t come out, how am I going to send him to go out?”

Belkis is, like about 20 other people, in a line outside a small store. People, who are distributed between the sidewalk and part of the street, try to stay apart, but when the doorman opens to let a few in―two or three, whose hands are religiously sprayed with a hypochlorite solution―, the order disappears until the door is closed and again people try to maintain a minimum of distance between each other.

“If this coronavirus continues for a long time,” the woman reflects, “the situation is going to get worse. And I don’t know how they are going to manage to keep people still if there’s no food. They will have to put more things in the ration book and not even like that, because from what they have said on television, what there is is not enough to go round.”

“That’s why I’ll continue going out while I can,” she says through her facemask, “because somehow I have to solve. But the plate of food for my parents or my son can’t be missing.”

While the until recently very popular tourist sites in Havana, such as San Francisco, Armas or Cathedral squares, or the Bodeguita del Medio, look deserted today, without the hundreds and even thousands of visitors they received every day; other places in the Cuban capital maintain their comings and goings.

Obispo Street no longer has its perennial tourists, but even so, it is full of Cubans. The same goes for San Rafael, Reina, Galiano, Monte and Carlos III, and other less central and populous streets, particularly where there are shops, markets and grocery stores. Also in the surroundings of parks such as those of Fraternidad and Curita you can see many people, most of them at bus stops, but also others sitting on benches, talking, oblivious to danger.

The scene is repeated in other parts of the city and the country―as to some concerned Internet users publish on social networks―, a landscape in which the apparently carefree people alternate with those who are outside their homes out of necessity, because of work, because of something essential.

There are more police officers on the streets, with their mostly black or blue facemasks, and medical students and other health workers, with their green facemasks, carrying out screenings for possible suspects, but also street vendors, couples walking holding hands, pedicabs, people walking their dogs, neighbors sitting outside their houses, children who play on the sidewalks, young people listening to music with their headphones or making it heard in the surrounding areas with a loudspeaker. Even the usual drinkers, bottle in hand, and the occasional domino table.

“They don’t know the risk they’re running,” says Ignacio, an engineer, about 50 years old, visibly concerned, “they have no idea how terrible the coronavirus is. I have a daughter in Spain and the stories she tells are very sad: hundreds of deaths every day, thousands of infected, hospitals that cannot keep up. If that were to spread in Cuba, God forbid, many people could catch it and die. The main thing is to take care of yourself, to prevent, but there are those who seem to think that they are immune, that nothing will happen to them, and it is precisely in trust where there is danger.”

Ignacio is at the entrance to his house, in Vedado. He went to throw out the garbage and returned as soon as he could. Apart from this evening obligation, he just goes out once or twice a week to his office and to do some shopping. Now, from the security of his gate, he watches several passers-by, some evidently back from work walking at that time of the evening –about 6:30 pm–, either because they live nearby or so as not to tempt luck on public transportation. Not every one of them, however, is in that case.

Several houses beyond there are some neighbors on the sidewalk, with colorful facemasks, who greet Ignacio in the distance when they see him leave his house. He returns the greeting with resignation. An ice cream vendor―one of those who announces his recorded message on a loudspeaker―passes by on his bicycle and one of the women yells at him to stop. A girl comes out of another house with a nylon bag and some bills in her hand.

Ignacio cannot cope with the scene and decides to enter his house at once. The seller does his thing and goes on pedaling. The girl retraces her steps with the ice cream in the bag and the women are still on the sidewalk, now having a snack.

“Life has to go on,” Carmen, one of the neighbors, 30 and a bit, says with her facemask down and her half-eaten chocolate ice cream snack. “Díaz-Canel himself said that you had to worry, but without panicking, and life is hard enough to not even eat ice cream when you can. If they establish the quarantine, we’ll see.”

Her companions support her and continue chewing. Then, after a few last comments, they will say goodbye until the next day and return to their homes. At 9:00 at night, precisely with the cannon blast from the La Cabaña fortress, they will surely go out to their doors and balconies to applaud the doctors who are fighting against the COVID-19, a tribute that began in other countries and that in Cuba is even announced by the official newscast. And after that, they will return to their nightly routine, to their new normalcy.

A (un)common scene with facemasks, screenings, daily reports, closed schools, suspended activities and other government measures, which after the initial alarm of the first cases on the island and the concern for the deceased, is being established among the people and is becoming more and more common. In some cases, for good. In others, not so much. Dangerously.