It’s impossible to know exactly how many unemployed there are because the computer system was designed to reject most cases. 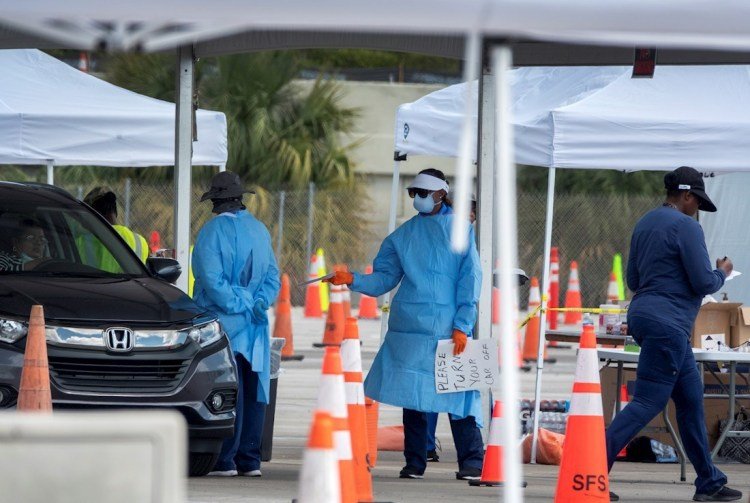 Members of the National Guard wear protective gear while making nasal swabs for coronavirus testing at a test station in the parking lot of the Hard Rock Cafe Miami in the Super Bowl Stadium in Miami. Photo: Cristóbal Herrera / EFE / EPA.

COVID-19, the scientific name for the fearsome coronavirus, has left a trail of nearly 400,000 unemployed in Florida. But there are many more. In fact, nobody knows how many because there is no way to count them.

All this because the computer system that processes the applications for unemployment benefits, whose installation cost 77.9 million dollars, simply doesn’t work.

The program was created during the past administration of the former governor and now Republican Federal Congressman Rick Scott (2011-2019). Over the past three years, Florida auditors have repeatedly told Scott and current Governor Ron De Santis that the system has to be fixed. But they have not listened to them.

In addition to the fact that the situation might not be a problem in normal times because Florida used to receive a monthly average of 30,000 requests for compensation. During the past two weeks the figure has shot up to just under 400,000 requests and the system has crashed.

The crisis is so big that, at least in this, Republicans and Democrats agree. “It’s a disaster,” an unidentified adviser to Governor De Santis commented to the Politico site.

The fiercest criticism comes from the Republicans. This being a presidential election year, the unemployment figure represents a very serious problem in reelecting President Donald Trump in a capital state in electoral terms.

But there’s a key detail in this crisis. When it was created in 2013 on Scott’s orders, the state legislature raised a lot of trouble because it accused the governor of designing it so that it purposely left as many unemployed as possible to sound good in the statistics. The number of unemployed in the United States is accounted for by claims for unemployment benefits.

“It’s like a sandwich. The system was designed that way by Scott. He didn’t try to save money, but to make it difficult for people to have access to unemployment benefits and to keep unemployment figures to a minimum, and thus the Governor [Scott] would have something to boast about,” added De Santis’ adviser.

The former governor’s idea was also to save unemployment insurance tax payments to businesses, including his conglomerate of health care delivery firms.

A study carried out by the state Congress showed that between 2011 and 2020 Scott’s plan would save about 2.3 billion dollars in taxes to be paid by companies.

When in 2015 the former governor wanted to appoint a director to administer the Florida Reemployment Assistance Program (FRAP), Republican senators opposed and ordered an audit to find out how much the computer system cost. They ordered that it be fixed quickly, anticipating the political problems that might arise once the Republicans suffered the electoral consequences. As Florida Republican Party Chairman Joe Gruters said Thursday: “77 million? Someone has to go to jail….”

When De Santis inherited this problem, last November, he promised to solve it as quickly as possible. He has not, and his Republican colleagues are furious.

So far, almost 400,000 people have managed to apply and their cases are being analyzed because benefits are not automatic. They have to meet some requirements, and the longer they take, the more negative the November election result could be for Republicans.

The big problem is that the system has crashed. You can’t go directly to the page, to the point that the government has recommended not to try it overnight.

“The governor has told us that they are going to print some forms for people to ask for the compensation through them, but he has not told us how he is going to hire and how much it costs people to process them,” Gruters emphasized.

Unemployment in Florida soared after local and state governments applied a package of measures that caused the closure of the entire tourism industry, restaurants, and placed limitations on hotel service, areas where workers basically live on tips and their weekly check, which depend directly on the income of the employer.

Because Florida is considered a “free hire” state, employers can fire anyone without justification, which is quite common in the world of tourism.

Havana in times of coronavirus: (un)common scenes with facemask