Under the scorching Juárez sun, Manuel thinks about how much the “pollero” will charge him to cross again, which area of ​​the border he will take him through, and how safe he can be in a place where even children work for the “narcos.” 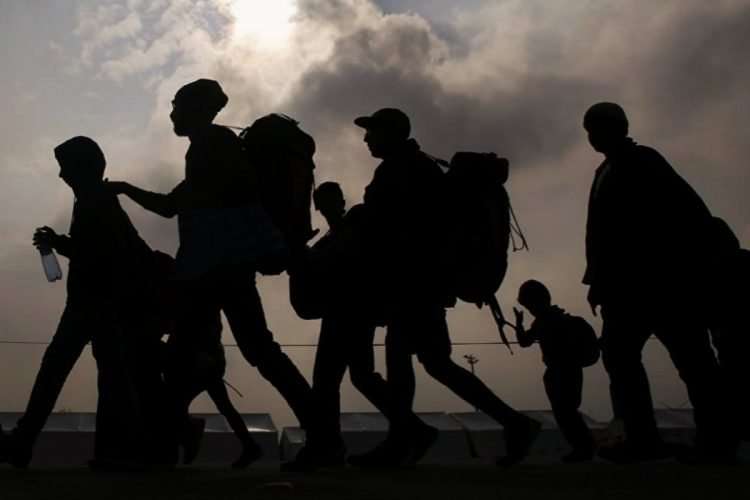 “I’m going far away, father; that’s why I’m here to give you the notice.”

“And where are you going, if I may ask?”

“And there for what? Don’t you have your business here? Aren’t you in the pig business?”

“I was. Now not anymore. It doesn’t give. Last week we didn’t manage to eat and before last week we ate only quelites. There is hunger, father; You don’t even realize it because you live well.”

“What are you saying there?”

“Because there is hunger. You don’t feel it. You sell your cuetes and your saltapericos and the gunpowder and with that you get by. As long as there is work, the money will rain down; but not me, father. No one raises pigs at this time. And if he raises them, he eats them. And if he sells them, he sells them expensive. And there is no money to market them, other than this. The business is over, father.”

“And what the hell are you going to do in the North?”

Manuel Pérez Mendoza, a 32-year-old Cuban from Isla de la Juventud, has been in Ciudad Juárez since Monday, May 2. He was returned there by the Border Patrol after holding him for a week and a few days. Despite being told that he would be taken to a religious institution, supposedly in U.S. territory, he was transferred along with other migrants to the Mexican side of the border, where personnel from the National Migration Institute (INM) and the National Guard were waiting for him.

There they informed him that the policies had changed for Cubans and, like the rest of the migrants who arrived illegally at the border, he was being returned to Mexico by virtue of the revitalization of “Title 42”1 or the “Quédate en México” Program,2 they did not specify more.

The screams, tears and protests were useless. Manuel was abandoned on the bridge that joins and divides identical geographies and different worlds; a bridge ironically named “Pass of the North” that rises, ignorant and alien, over the broken dreams left by migrants in their wake.

Born in 1990, at the beginning of the deepest crisis that Cuba suffered after 1959, Manuel’s childhood and youth were marked by better and worse experiences, with illusions that things could improve and sinkholes that made those around it plummet and have to start over.

The son of some young people from the eastern provinces who went to study on the Isla de la Juventud and established themselves there, he has experienced decade after decade the accumulation of disappointments and dreams that hover on a small island within a larger archipelago, where the economic difficulties have increased, along with the reduction of its population through emigration to other areas of Cuba or abroad. In that continuous tide that snatches away dreams and people, some of his relatives, including a brother, arrived in the United States through Ecuador before Barack Obama repealed the “wet foot, dry foot” policy, while he started his self-employment (building and rehabilitating homes) with the socioeconomic transformations promoted in the “Raulista era.”3

However, like so many other Cubans, he decided to take the road to “the North” because he “couldn’t take it anymore, couldn’t take it anymore.” With a young child, the coronavirus pandemic, lack of economic options, “power cuts” and the ever-increasing difficulties of daily life, “leaving” has become the only possible option in his opinion: “the queues to get anything, especially when there are small children; begging people to buy for you with their cards, because you have to have cards in dollars, otherwise they won’t sell you anything”; and because “you know that things are not going to get better, everything is for the worse.… You thought that with the changes things were going to get better but nothing, everything is getting worse and worse.… My brother had to leave and now it’s my turn.”

With the money that his relatives managed to borrow in Miami, Manuel was able to pay for the plane ticket to get to Havana and from there to Nicaragua, the country most used to start the journey to the United States because it does not currently request visas from Cubans. In Managua he paid the “coyotes” to cross him through different nations and borders: El Salvador, Honduras, Guatemala until they reached Mexico. In that last country they put him in contact with Mexicans in Tapachula who took him with other migrants to an isolated and deserted place between Chihuahua and Texas, a journey that was not easy at all, full of delays, dangers and difficulties that ended in a vehicle overcrowded with people near “El Paso,” where a U.S. border patrol detained him and took him to a shelter.

Already consigned, Manuel hoped that, as he had learned from the rumors that spread among his friends and the Cubans he met along the way, they would carry out the required interview, take his fingerprints and send him, sooner or later, to join his family in Florida to wait for the judge’s decision on his case, or the usual year and a day to benefit from the Cuban Adjustment Act.

But things did not go the usual way. Their group was separated by sex, given a uniform, placed in an isolated space and, after several days, the men were returned to Mexico without much explanation and with misleading or unclear information according to the accounts of those interviewed. Without having accurate information, since the authorities only told them that they were being returned to Mexico “because of Title 42,” some of the group fled to try to cross again, others made phone calls, while Manuel and other migrants wandered around Ciudad Juárez looking for food and a hotel for the night.

That’s how he found out that the “Americans” had expelled him because they had many migrants and could not take care of all of them. Although they made exceptions for Cubans, Nicaraguans and Venezuelans in previous months, now it seemed that they were accepting only a few. As the countrymen living in the city said, it was not clear what was happening: “things are changing fast, no one knows what they’re (the U.S. authorities) going to do tomorrow or what options we have here (in Ciudad Juárez). Look, right now they can leave you in the United States and do your paperwork, or send you to Mexico, no one knows, and here nobody is responsible for you….”

The feeling of uncertainty and danger of being alone in a strange place was a new experience for Manuel. Although he left Cuba without worrying much about the road and its possible complications, now they came to his mind, like a chaotic whirlpool, all the problems and dangers he had faced and those that remained to be overcome to offer a future to his people. If he managed to get there, to the United States, he could send economic aid to those who had remained in Cuba and, over time, claim whoever he could: his son, his wife, his parents…

What Manuel did not know was that, since the beginning of the coronavirus pandemic, Donald Trump had launched an obscure practice known as “Title 42” that allows people who arrive in the United States irregularly to be returned expeditiously. Under that policy, 1,833,824 people had already been expelled since 2020 and without even asking their names.

Due to the lack of agreements between the United States and Cuba, it had not been possible to return Cubans who arrived through the border, but given the increase in arrivals of islanders and the growing difficulties in dealing with their number, President Biden agreed with Mexico to return them to Mexico with the understanding that that country, by having migratory agreements and good diplomatic relations with Cuba, would be in a better position to deal with the problem.

Even though he is not even aware of it, Manuel owes his current situation to the tensions and negotiations between the country of origin, transit and possible destination. In the complicated geopolitical chess game, an unknown young Cuban named Manuel has become another bargaining chip, “another one” despised by his own and foreign states who tries, in spite of it or perhaps for that reason, to survive with all his force to reach “the other side.”

Pensive, looking from afar at the nations that do not see or care, under the scorching sun of Juarez, Manuel thinks about how much the “pollero” will charge him to cross again, which area of ​​the border he will take him through, and how safe he can be in a place where even children work for the “narcos.” He tells himself, in a low voice, that it doesn’t matter, he will try again and again until he succeeds, because his family awaits him on a small island within the larger archipelago, an island that was once the territory of the young and of hope but no longer is that, now dreams are deposited in those who depart…. Lost in his thoughts, Manuel begins to walk aimlessly until he meets border guards who ask him about his identity and what he is doing there. In a clear way and with his eyes fixed on the interlocutors, he answers: “My name is Manuel, I am Cuban, and I am in the Pass of the North.”

1 In early 2020, and in the context of the coronavirus pandemic, the United States Centers for Disease Control and Prevention (CDC) issued a public health order that gave it the authority to determine if a contagious disease abroad represented a danger to the United States. With this argument, it was stipulated that all migrants who arrived at the border could be returned to their country of origin or to the last country of transit in an expedited manner and without giving them the opportunity to request asylum. This measure, harshly criticized for violating people’s human rights, has caused significant controversy but, to date, remains in force. See in this regard, Catherine E. Shoichet, ¿Qué es el Título 42? Una política fronteriza que permite la deportación rápida y que genera debate”, April 26, 2022, CNN in Spanish.

2 On January 25, 2019, the presidents of the United States (Donald Trump) and Mexico (Andrés Manuel López Obrador) launched the “Quédate en México” (Stay in Mexico) program or MPP (Migrant Protection Protocols). Under this agreement, U.S. border officials return asylum seekers to Mexico to await the judge’s decision on their case. This program, with its variations, has been maintained during the Biden administration, which continues to force migrants to remain for months or years in the dangerous cities of the Mexican border in conditions of extreme vulnerability. See in this regard Human Right Watch, “Quédate en México. Información y recursos”, February 7, 2022.

3 After the arrival of Raúl Castro as the head of his country’s government, in 2008, the so-called “updating” process began to take place, a set of economic and social initiatives to improve economic performance without giving up the socialist model, as described in the “Project for Economic and Social Policy Guidelines.” In this context, and within the framework of the 6th Congress of the Communist Party of Cuba in 2011, a series of measures were approved such as the handing over of idle land in usufruct and self-employment was encouraged.

Cuban government rejects its exclusion from Summit of the Americas