The best humanitarian corridor for Cuba that the Cuban-American community can ask the Biden administration for is to suspend sanctions as requested by the UN Secretary General. 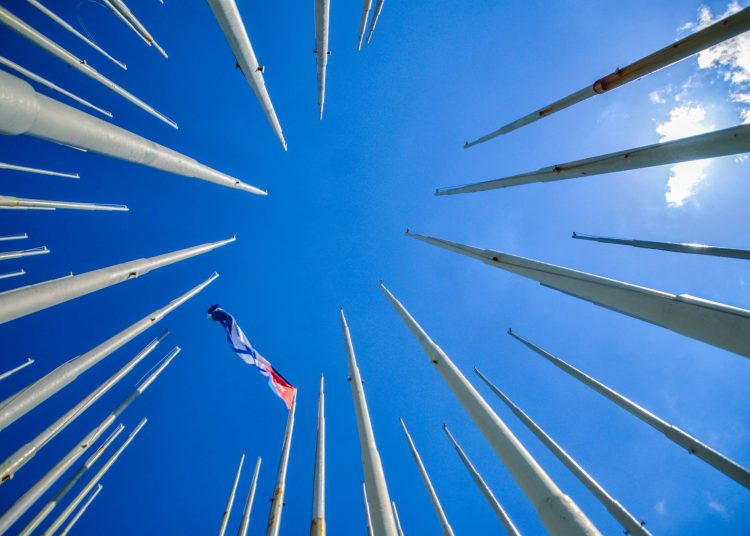 Among the worst ideas circulated by the pro-blockade opposition to implement the COVID-19 pandemic against the Cuban government, few are worse than proposals for a corridor and humanitarian intervention. The origin of this nonsense is in a statement by the misnamed Foundation for Human Rights in Cuba, a kind of affiliate of the Cuban-American National Foundation. These proposals are nonsense in terms of international law. Far from helping, they denigrate and distract from what can be a united effort and constructive discussion about the merits and weaknesses of the Cuban response to the coronavirus.

The pandemic does not believe in political differences. It is imperative to clearly think about proposals that facilitate responding to the challenge, from science and reason, from international law, with humanitarian criteria, from the unity of the nation. Cuba is a poor country, further impoverished by the consequences of a statist economic model, with its back to the market for decades, and by the U.S. blockade policy. The country needs help at such a difficult time and must accept it, without complexes. From international humanitarian organizations, from any country that responsibly provides it, from all Cubans of good will on the Island and the diaspora.

With whom must we close ranks? With the government of the moment, that of Miguel Díaz-Canel. He has thousands of errors and defects but he is the one who can vaccinate the entire population and contain the pandemic. That is the fundamental thing today. The protests this Sunday indicate a tiredness in which there is much dissatisfaction with the arrogance and government management. But it would be naive to ignore that the context of Washington’s illegal, immoral and counterproductive sanctions against Cuba have made the difficult problem of the pandemic almost impossible. The motto of “freedom” sounds very rhythmic but behind those who break windows, overturn patrol cars, and throw stones at the authorities there is much of the “hunger, despair and unemployment” that Lester D Mallory called for to get Cubans on their knees.

Closing ranks implies understanding national priorities, while continuing to propose and postpone a post-crisis debate so that the disaster we are experiencing is not repeated. The COVID-19 epidemic caught many countries sleeping. As it happened in Cuba, it is important to ask for an account, but we must also learn from the great peoples in their bright hours. In London beset by Luftwaffe bombs, with sirens sounding, the opposition loyal to His Majesty and thus to the United Kingdom, closed ranks alongside the Conservative Party. Attlee, the Labor leader, did not give up criticizing Churchill, or blaming the Tories for the mistakes of his predecessors in Munich. But that was — as Attlee himself said to his bases — “after winning the war.”

What is the debate to propose in Cuba and postpone until after the pandemic? If, as José Martí said: “Governing is nothing more than foreseeing,” the communist party that proclaims itself a follower of Martí’s ideas has important accounts to render. There were unheard complaints inside and outside of Cuba about the problems of an irresponsible agrarian policy with decades of its back to the market, a negligent food importer that made Cuba more vulnerable to the pandemic and the unjust and illegal sanctions of the United States.

Why was a policy focused on economic and political control followed for decades, not on development as the goal in the face of which to surrender all ideological biases? Why this insistence on a hostile model against small and medium-sized owners in an unduly centralized model? What have been the costs of excessive gradualism that postponed monetary and exchange unification until the worst moment? Who were responsible for those ideological rigidities that continue to cost us today?

The “humanitarian corridor” to nowhere:

In 1991, with Resolution 46/182, the United Nations General Assembly created its humanitarian aid system. The operation of this system is regulated by the agreements between the States that have defined the specific situations and conditions to apply practices such as the creation of a humanitarian corridor.

The precedents of a humanitarian corridor in the international system are twofold. None apply to the Cuban situation.

The first applied in the wars in the Balkans, Sudan, Nagorno Karabakh and other situations, refers to the creation of a space under international protection to assist a population besieged by forces of a hostile government. It is about protecting, in accordance with international humanitarian law, the civilian population, particularly its most vulnerable sectors, from the worst consequences of the armed conflict, particularly the deprivation of medicine, food, drinking water, etc. The UN coordinator for humanitarian emergencies, or the secretary general himself, have negotiated respect for humanitarian corridors, by the different parties in a war conflict.

The use of these corridors has been controversial. It is a sub-optimal alternative even questioned by the international committee of the Red Cross that has emphasized the unrepealable condition, for example, in Syria, of international humanitarian law, whether there is a corridor or not. The corridor generally exists to mitigate the desperate crisis condition created by an armed actor who is disrespectful of humanitarian law and interested in denying the affected population the minimum protections guaranteed to non-combatants. The premise is that the noise of the guns does not silence the law. It is the conception of “ius in bellum,” which in Latin means that there are laws that regulate even the conduct of a war.

What does that have to do with Cuba? Nothing. Matanzas is not surrounded by any army. The Cuban government makes a substantial effort to save the lives of those who reside there. No one, except the U.S. blockade sanctions, disrespectful of humanitarian law, has tried to deny Cubans access to food, drinking water, medicine, or minimal health care. The opposite is true.

Any legitimate criticism of the bureaucracy is clouded when introducing a concept alien to the current situation. Can the Cuban government constructively reason with those who base themselves on the artifice of equating the situation in Matanzas with a war against the people in which humanitarian standards should be guaranteed for the protection of the civilian population?

To think that the Cuban government and the part of the people that support it would stare impassively at the protests supported by them that have agitated and manipulated the concepts of “corridor” and “humanitarian intervention” is a joke in bad taste. If it is simplistic to attribute the social outbreak to foreign actors, it is also simplistic to ignore the role of sanctions and the pro-interference agitation of a false humanitarianism that only seeks to fish for profits in the troubled waters of the pandemic.

If it is a question of humanitarian law, it would be necessary to listen to the resolutions of the Human Rights Council and the growing opinion of experts and rapporteurs on unilateral coercive measures, who have called for applying the same considerations on the protection of the population applicable to war conflicts. UN Secretary General António Guterres and the Human Rights Council have called for the elimination or suspension at least temporarily of the sanctions that weaken the confrontation with the COVID-19 epidemic.

That cessation of sanctions requested by Guterres is the biggest denial to those who also call for a kind of truce between those who denounce the blockade and those who defend it. This balancing act obviates an undeniable reality: those who call for an end to sanctions advocate facilitating access to materials to face the pandemic. Those who defend economic warfare hinder, and delay the ability to face the pandemic. They promote a policy alien to humanitarian law, since the Helms-Burton Act does not include any periodic assessment before Congress of the effect of the sanctions.

The best humanitarian corridor for Cuba that the Cuban-American community can ask the Biden administration for is to suspend sanctions as requested by the UN Secretary General. The United States was reminded of this by the 184 countries in the last vote on the need to end its illegal and immoral policy of sanctions against Cuba. If what is wanted is to bring medical aid to Cuba, let them open flights that carry medicines, protection for health personnel, and food.

The second meaning of the idea of ​​a humanitarian corridor refers to a protected space for the settlement of refugees. Pope Francis used that term to welcome into the Vatican several dozens of refugees fleeing the wars in the Middle East. There is the so-called “Italian corridor” of caring families that, given the institutional difficulty in Europe to legally welcome those who seek refuge on its coasts, have created, with the support of various humanitarian organizations such as the community of San Egido, their own program of reception. Again, what does that have to do with Matanzas, Cienfuegos and Guantánamo?

If what is wanted is to give a humanitarian connotation to Cuban emigration today, why not reduce the despair over the pandemic by asking the governments of the United States and Cuba to cooperate in health matters, without complexes, as they already did in West Africa against Ebola, even before December 17, 2014? Now that Samantha Power, the U.S. Ambassador to the UN who spoke of that cooperation with pride, is the general administrator of USAID, why not cut the waste of money on mantras that barely produce nonsense about a “humanitarian corridor” and use it to send medicines and medical equipment to Cuba?

There is already a consulate in Havana and several immigration agreements. The Cuban government has not raised any objection to those who have visas leaving, nor is there in the United States a refusal to receive them in an orderly manner if they receive their visas. The best “humanitarian corridor” for the Cuban immigration issue is to eliminate all the measures that Donald Trump took against family reunification, the visa lottery, and the normalization of a legal, safe and orderly flow, reopening the consulate.

All the rhetoric about the “humanitarian corridor” is nothing more than a “little show” to mark rhetorical points against the Cuban government and its idea of ​​medical power.

The idea of ​​a humanitarian intervention in Cuba, under the banner of the OAS, which Carlos Alberto Montaner agitated a month ago, is cunning salesmanship. The probability with the Biden administration is zero. Cuba is neither New Zealand, nor Israel nor Taiwan, nor the United Arab Emirates, with a stellar record facing the pandemic, but in a population of 11 million, the 238,491 cases, 57,396 under study, and 1,537 deaths hurt. 204,810 have recovered from the disease in a system that continues to function despite the fact that Biden’s policy is essentially the same as Trump’s cruelty. It is enough to compare these data with the rest of the continent.

It is in the face of the spirit of bridges, reconciliation, patriotism and dialogue where the game with concepts of connotations foreign to the Cuban situation such as “humanitarian corridor and intervention” appears most pernicious. The “humanitarian corridor” to ask the Biden administration for is to listen to the international community and its own electoral promises, dismantling a sanctions policy that is not humanitarian at all.