His thing is "to bring God’s supernatural power to this generation." 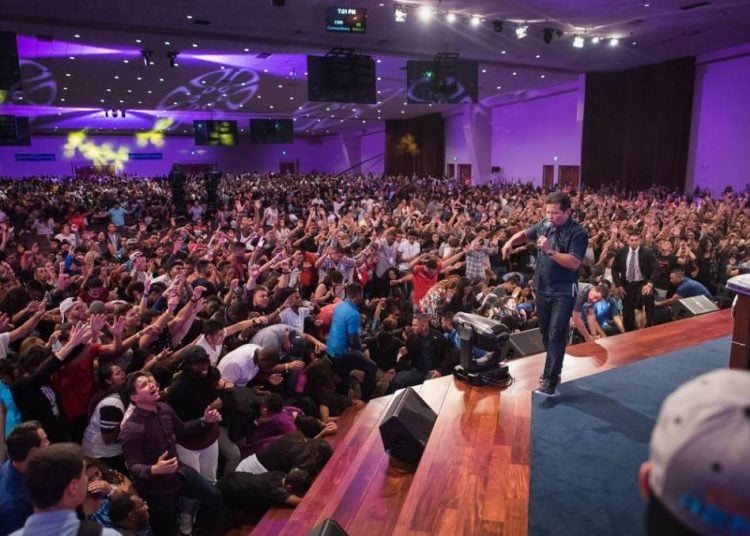 Guillermo Maldonado during a service at the King Jesus Ministry. Photo: tiempocristiano.com

The name of Guillermo Maldonado probably doesn’t mean too much for many readers in Cuba, and perhaps also from abroad. Suffice it to say, in short and to the point, that he is one of the most famous so-called prosperity pastors among Hispanics in the United States, founder in 1996 of the non-confessional church King Jesus Ministry, according to some, the fastest growing within the Union.

The story of King Jesus is in fact not very different from that of other churches of its kind. Its official narrative postulates that it began with twelve parishioners―and here the parallelism is obvious―in the living room of an apartment in SW Miami, and concluded with a huge temple in an area of ​​Kendall, at 14100 SW 144th. Ave., near the Tamiami Airport. And with twin ministries in Naples, Cape Coral, Hialeah, Little Havana, Tampa, and outside of Florida in Marietta (Georgia) and Astoria (New York), among others.

In this journey, religion, mass media, market and strategic alliances are interspersed with individuals like Toufik Benedictus Hinn, better known as Benny Hinn, the Israeli televangelist inevitably associated with both crusades of miracles and several frauds. Today Maldonado’s ministry is located on about 100,000 square feet (9,300 square meters) of land, valued at more than 30 million dollars and with capacity to simultaneously receive some 7,000 people.

A successful man. In 2006, Maldonado, who to be at his ministry’s level also called himself Apostle and reserved for his wife the title of Prophetess, created the University of the Supernatural Ministry. “Train with power,” says his website. And he specifies: “You can also be a Christian leader to take the Gospel of the Kingdom with power.” The entity, attached to the King Jesus Ministry, offers courses for Christian leaders in three areas: fundamental, prophetic and revealing education. As well as courses with online certificates.

According to its Executive Vice President, John Laffite, one of those programs, called Supernatural Immersive Experience, is “a training for a period of two weeks where you come here to Miami, to the King Jesus Ministry, and we train you, area by area, in the ministries we carry out here in the King Jesus…. There is an emphasis on activating you to move in the power of God so that you take that power of God to your church, to your people, so that you can impart it.”

An extraordinary church for extraordinary times, and with unmistakable hallmarks, beyond the healing of the sick through the action of the Spirit. One, train the pastors in the gold dust that falls from Heaven, sent by the mentioned Spirit, directly to the community of believers. A matter of specialization: others turn water into wine or make diamonds and rubies fall in the place of worship. But not long ago a former assistant of Apostle Maldonado decided to publicly confess the following to American pastor Justin Peters: “When I was in Maldonado’s ministry, my job was to get into the ventilation system with a basketful of gold dust and place it there so it would be spread throughout the congregation….”

Another, the predictions. But Maldonado has been accumulating successive failures in different categories: political, social, sports. In 2008, for example, he announced to the world from Quito that entrepreneur and evangelical pastor Melba Jácome, of the Tierra Fertil Movement, would win the elections in Ecuador.

“On this day I decree and declare on the airs of this nation: ‘Ecuador, you will not be a Cinderella in Latin America, you will be a place of revival where the nations of the Earth will come to the center of the Earth to praise my name,’ says the Spirit of God. ‘I am going to shake government spheres; I am going to remove individuals who have stopped the advance of my Kingdom….'”

In August 2015 Maldonado prophesied a great revival in Argentina and that there would be a Christian president. He said in Luna Park, Buenos Aires:

“And the Spirit of God says: ‘Days will come when the president of this nation will be a believer. They will praise me in the Casa Rosada….'”

In that year’s elections, Mauricio Macri, an enthusiast of Buddhism and psychoanalysis, was elected.

Maldonado also predicted that the 2018 World Cup venue would be given to Argentina. In a video uploaded to YouTube by the channel El Reino de los Cielos Está Aquí (The Kingdom of Heaven Is Here), he said from Miami: “Argentina! Argentina! New industries are coming for you. I bring the World Cup to Argentina.”