The draft must be approved in this session. 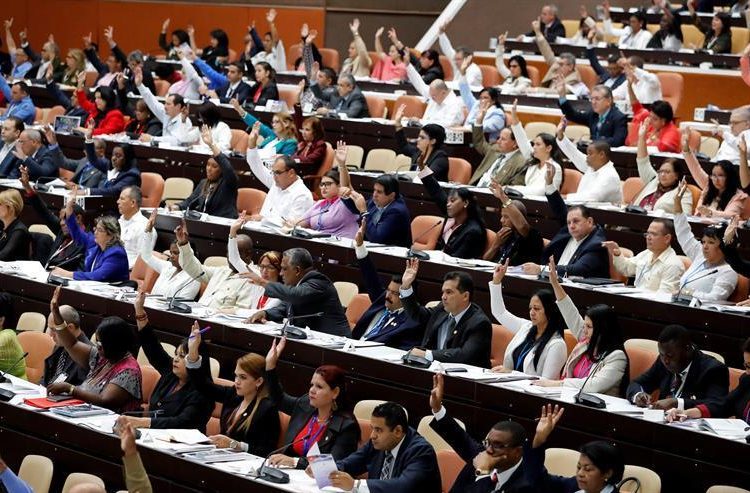 Voting during the plenary session of the Second Ordinary Period of the 9th Legislature of the Cuban Parliament, December 21, 2018. Photo: Ernesto Mastrascusa / EFE.

Cuba’s National Assembly of People’s Power will meet starting July 13 to address the draft of the Electoral and Fisheries laws, and the country’s economic situation during the first half of the year, among other issues.

The 10 permanent commissions of the National Assembly will previously hold regular working meetings on July 8, 9 and 10, according to the convocation for the third ordinary session of the Assembly, in its 9th Legislature, published this Monday in the state media.

The convocation doesn’t give details on the topics that the Cuban deputies will address in this meeting, one of the two that is held annually in July and December by the island’s Parliament.

Last week, the Constitutional and Legal Affairs Commission of the Assembly presented to the deputies through a videoconference the draft Electoral Law and debates were opened to collect their opinions, suggestions, modifications and doubts. According to parliamentary authorities, the population can also participate in the debates.

The draft of a new Electoral Law, which was analyzed by the National Electoral Commission and reviewed by another Parliament group, must be approved at its next meeting in accordance with the schedule established after the new Cuban Constitution was endorsed last February.

The new legislation, which has a total of 16 titles, 45 chapters, 32 sections, 5 final provisions, 6 transitory provisions and 290 articles, differs from the one in force in some aspects.

One of them proposes the reduction of the Council of State, which will be formed by 21 members, including its leadership, instead of the 31 that currently comprise it.

It also modifies the proportion for the election of the deputies to the National Assembly, which reduces the total of parliamentarians to be elected to 131, with which Parliament would be composed of approximately 474 deputies, instead of the 605 members that currently comprise it.

Last April 10 Cuba approved its new Constitution during a solemn and “historic” session of the National Assembly, on the same day that 150 years ago the island’s first Magna Carta was drafted.

The text recognizes private property and considers foreign investment necessary, although it maintains the Communist Party of Cuba as a “higher ruling force” and ratifies communism as an aspiration.

In this meeting it is traditional that Parliament addresses the economic state of the country, which is dragging an endemic crisis due to lack of liquidity and indebtedness, although it expects to grow 1.5% this year, an objective that is facing the strengthening of the U.S. economic embargo and the problems of its ally Venezuela, which has drastically reduced its shipments of subsidized crude.