This was confirmed on Monday by Dr. Francisco Durán, director of epidemiology of the Ministry of Public Health, who said that rapid tests and real-time PCR tests are being carried out in the 15 municipalities of the Cuban capital, with a view to early detection, prevention and control of the coronavirus. 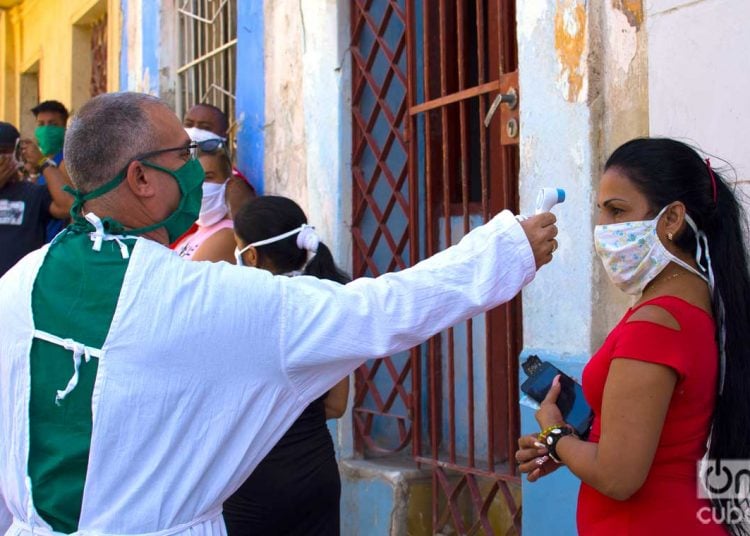 A doctor takes the temperature before testing for COVID-19, in Los Sitios, in Havana. Photo: Otmaro Rodríguez/Archive.

Given the increase in the number of COVID-19 cases in Havana in recent days, massive studies to detect the disease are being carried out in the main Cuban city, according to the island’s Ministry of Public Health (MINSAP).

This was confirmed this Monday by Dr. Francisco Durán, director of epidemiology of the MINSAP, who said that rapid tests and real-time PCR tests are being carried out in the 15 municipalities of the Cuban capital, with a view to early detection, prevention and control of the coronavirus.

In the usual daily press conference on the epidemic in the country, Durán explained that the greatest amount of tests is being made “in municipalities where there are transmission events, outbreaks of the disease and in those with a more complex epidemiological situation,” Prensa Latina (PL) reported.

These currently include Centro Habana, La Lisa, Marianao, 10 de Octubre, Cerro and Habana del Este, even though recent cases have also been detected in other Havana territories.

The specialist noted that “it is about finding possible infections in the so-called silent places taking into account the geographical characteristics and mobility of people in Havana” and said that as part of the government’s strategy against COVID-19 “the screenings will increase in the capital with the support of health workers, medical students and representatives of mass organizations,” quoted PL.

Havana is, along with Artemisa, the province with the most complex epidemiological situation currently in Cuba due to the coronavirus. The capital has experienced a rebound in infections that has prevented its passage to phase two of the recovery and keeps its authorities on alert, who decided that more than 2,000 daily PCRs should be carried out in the city alone.

In recent weeks, new patients and outbreaks of SARS-CoV-2 have been detected in several Havana municipalities, which shows that the virus continues to spread in the island’s largest city and has made it necessary to increase restrictive and preventive measures.

This Monday, Cuba reported 24 new cases of COVID-19, 10 of them in the capital, as a result of 3,485 PCR tests carried out. Thus, the island has a total of 2,670 infected, while the number of deceased remains at 87 and the number of recovered amounted to 2,373 people.