The governments of the United States, Mexico and the Bahamas have returned to Cuba a total of 8,566 irregular migrants from January to this date. Cuba is experiencing a migratory crisis that exceeds any previous data in numbers. 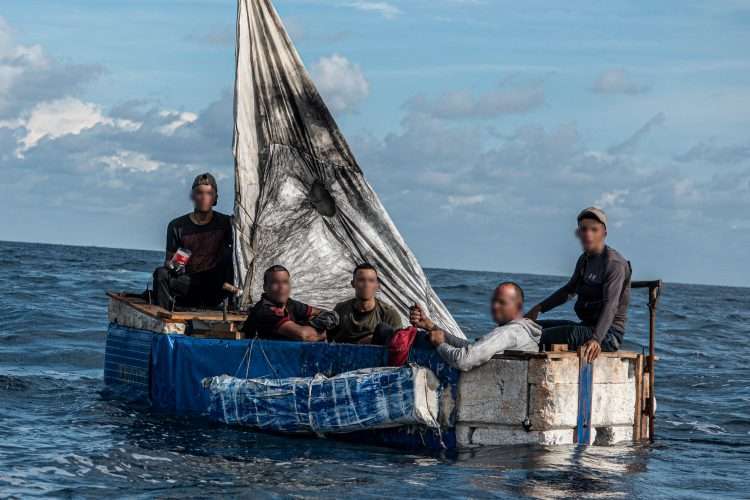 Just the United States Coast Guard Service repatriated in recent days 239 Cuban rafters who were trying to reach the coast of that country by crossing the Straits of Florida. Photo: U.S. Coast Guard.

The governments of the United States, Mexico and the Bahamas have returned to Cuba a total of 8,566 irregular migrants from January to this date in 2022, according to a report this Tuesday on Cuban television.

Just the United States Coast Guard Service repatriated in recent days 239 people who, using rustic means, were trying to reach the coast of that country by crossing the Straits of Florida.

With this new group, the United States has returned 6,485 undocumented immigrants, who arrived on the island through the western Cuban port of Orozco. There have been a total of 129 operations, according to data from the immigration authorities of the Caribbean country cited in said report.

In addition, the repatriations of a group of 76 migrants from Mexico and another, made up of 36 people, from the Bahamas were reported; making up 1,733 and 348, respectively this year, immigrants returned by the governments of those countries.

Last week authorities from the Cuban Border Patrol Troops and the U.S. Coast Guard Service held a technical meeting in Havana to exchange on migration issues in search of increasing bilateral cooperation in combating the illegal trafficking of migrants.

In these talks, both parties also discussed illegal departures, illicit drug trafficking, and maritime search and rescue operations, according to the island’s Ministry of the Interior.

Cuba is experiencing a migratory crisis that exceeds any previous data in numbers. Through the border between Mexico and the United States, and along the Straits of Florida, thousands of Cubans take risks in order to emigrate to the United States.

Analysts attribute the increase in the flow of Cubans who leave the island, both those who bet on journeys through Central American countries and those who embark on the sea in precarious boats, to the acute economic crisis that the country is suffering, and which includes a rise in the cost of living, the devaluation of the peso and uncertainty about the future.

The Cuban government blames that of Washington for the irregular exodus of Cuban citizens and illegal departures by sea, as well as on the breach of the bilateral agreement that stipulates the granting of 20,000 visas a year for Cubans.

In addition, the increase in migration to the validity of the Cuban Adjustment Act of 1966, which allows Cubans to apply for permanent residence in the United States after one year and one day of staying in that country.

For its part, the U.S. Democratic government has implemented several measures in recent months, including increasing the consular services of its embassy on the island and reestablishing a family reunification program that had been suspended since 2017.

Last July, 20,496 Cubans tried to enter the United States through land or sea borders, according to data from the U.S. Customs and Border Protection (CPB) agency.

In the last ten months, that agency registered the arrival of 177,848 Cubans to U.S. territory by land, which already exceeds the mass exodus of 125,000 people who left the western Cuban port of Mariel for the United States between April 15 and October 31, 1980.