The Cuban foreign minister stated on Twitter that groups of compatriots had returned through flights “organized thanks to cooperation between competent Cuban authorities and their counterparts in the countries involved.” 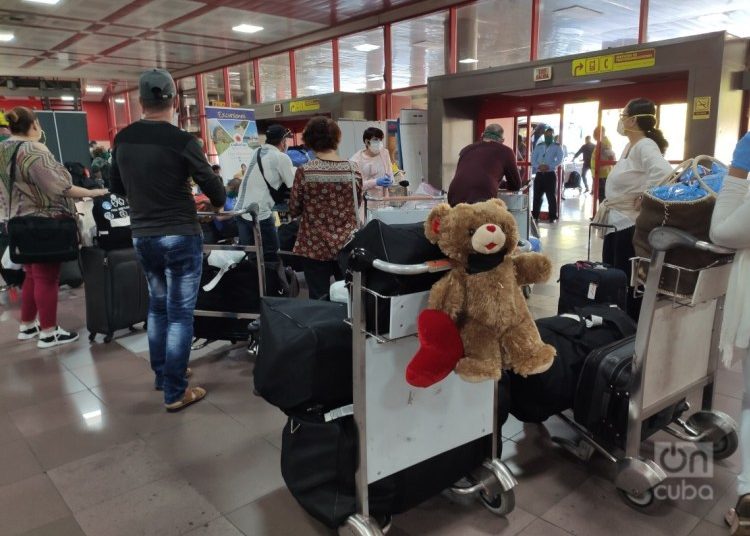 Arrival of Cubans on the island, with a single suitcase of 23 kilograms each, waiting at Havana’s José Martí airport for their transfer to an isolation center for the COVID-19 quarantine before going home. Photo: Mónica Rivero.

More than 2,000 Cubans who were abroad have returned to the island since the coronavirus pandemic broke out.

This was announced this Monday by Cuban Foreign Minister Bruno Rodríguez on his Twitter account, where he stated that the travelers had returned from 15 countries, “in the midst of a complex international epidemiological situation.”

Rodríguez specified that groups of compatriots had returned through flights “organized thanks to cooperation between competent Cuban authorities and their counterparts in the countries involved.”

In a previous tweet, the Cuban foreign minister assured that the island’s consulates “provide timely information to our nationals abroad” and said that “they keep track of the situation of stranded compatriots in different countries and help as much as possible.”

He also asserted that Cuba’s diplomatic headquarters abroad “make efforts to, whenever it’s possible, organiza the return” to the island of these people.

Following the decree of the COVID-19 pandemic, the Cuban authorities advised their compatriots not to travel outside the island, and left open the possibility of return to all those who were abroad at that time.

After closing its borders to international tourism, at the end of March, the Cuban government allowed residents in the country to continue returning, although it restricted the luggage with which they could enter the island and imposed a two-week quarantine in centers of isolation, to prevent them from transmitting the coronavirus if they were infected.

Blog on my isolation in Havana

Finally, in April the island’s authorities completely cut commercial and charter flights, but some Cubans have continued to arrive on trips coordinated directly with other countries, and some foreigners who remained in Cuba have also left.

Although the main source of infection of COVID-19 was initially foreign visitors, Cubans coming from abroad soon became the main transmitters of the disease, until arrivals were limited and quarantines were imposed.

In addition, 56 people have died as a result of the pandemic, while 525 have recovered.