Only state cars are obligated to pick up passengers

In a list of sanctioned entities, vehicles belonging to religious and fraternal institutions were “incorrectly” included, as well as companies with foreign participation, which did not stop before the inspectors to pick up passengers, without the obligation to do so. 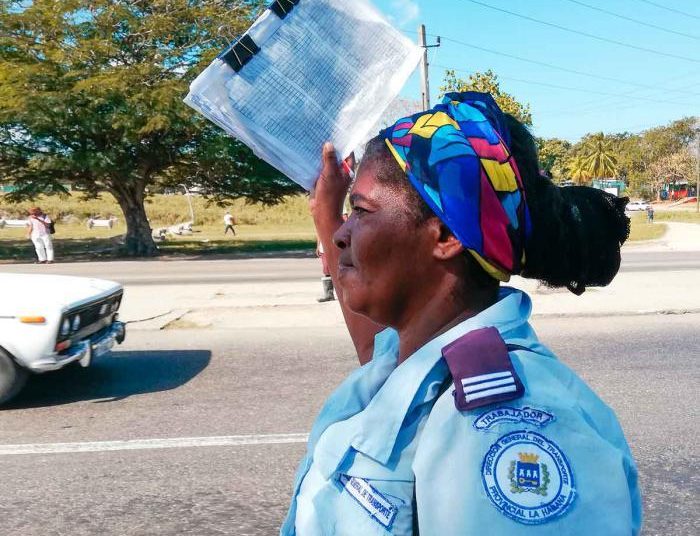 The Cuban Ministry of Transportation clarifies that only vehicles belonging to state entities have the obligation to stop and pick up passengers at bus stops. Photo: tribuna.cu

The Cuban Ministry of Transportation (MITRANS) clarified that only vehicles belonging to state agencies have the obligation to stop to pick up passengers at public bus stops, after a religious institution complained about its inclusion in a list of offending entities.

Through a note published this Friday in Cubadebate, MITRANS referred to the list published by the General Department of Provincial Transportation of Havana, which included institutions sanctioned for breaching government measures to alleviate the crisis in that sector, affected by the fuel deficit on the island.

Vehicles belonging to religious and fraternal institutions, as well as to companies with foreign participation, that did not stop when signaled by the inspectors to pick up passengers, without having the obligation to do so, were “incorrectly” included in the list, said the note.

The clarification is published after executives of the Presbyterian-Reformed Church (IPRC) in Cuba sent a letter to the minister of MITRANS, Eduardo Rodríguez, in which they consider it inappropriate to have been included in that list.

The IPRC sent a letter “to the minister of transportation and corresponding offices” requesting clarification on the appearance of religious institutions in “the list published by Cubadebate and the newspaper Tribuna de la Habana that considers us as agencies owners of state vehicles that haven’t contributed to alleviating the national situation,” said that church on its Facebook profile.

*Caption: Today, the IPRC sent a letter to the minister of transportation and corresponding offices requesting…

Posted by Presbyterian-Reformed Church in Cuba on Tuesday, March 3, 2020

The institution showed its disagreement for being included in a list of entities that own state vehicles, even “knowing the secular nature of our nation, reaffirmed in article 15 of our last Magna Carta.”

The letter states that it is “extremely shameful that we are publicly judged” by persons who do not have the “necessary information” to distinguish between state cars and vehicles of non-governmental organizations and “much less the church.”

“We consider that articles like this one divide our nation, undermine our Constitution and place the status our churches must have in our country on the table of debate,” the letter says.

Cuba is experiencing its most serious energy crisis in decades due to the intermittent interruption of the arrival of oil ships to the country, something for which the government holds the United States responsible due to its intensification of sanctions against the island and its ally Venezuela.

To address this scenario, which occasionally causes long lines at gas stations, savings measures were approved in the state sector, many of which the authorities are committed to maintain even if the situation stabilizes. Among these, there is the obligation of state cars to stop to pick up passengers at bus stops and other points of public transport.