The Cuban leaders discussed with Dang Thi Ngoc Thinh the increasingly close bilateral relations and agreements between both countries. 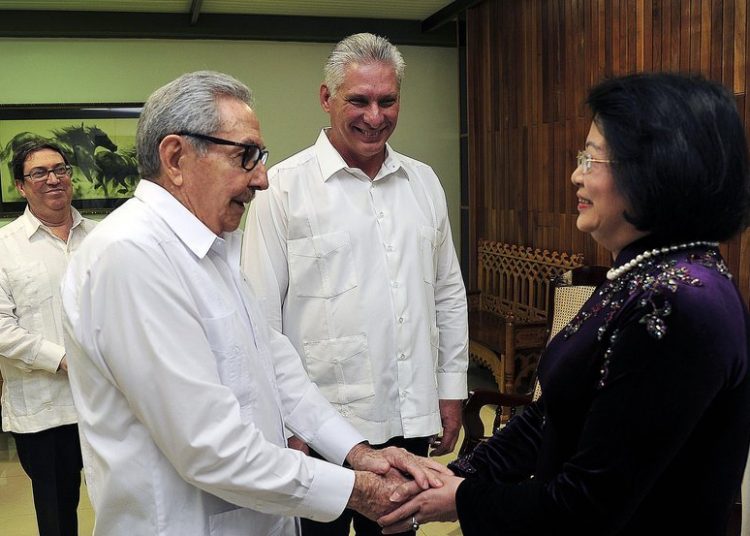 The leader of the ruling Communist Party of Cuba (PCC), Raul Castro, and the country’s president, Miguel Díaz-Canel, this Tuesday discussed with Vietnamese Vice President Dang Thi Ngoc Thinh the increasingly close bilateral relations and agreements between both countries.

During the meeting, the top Cuban leaders and the Vietnamese vice president held talks about “the close bonds of friendship that unite the two peoples, parties and governments,” according to a state television report accompanied by images of the meeting.

Castro, Díaz-Canel and Dang also discussed experiences in “the construction of socialism” in both countries and about the implementation of bilateral agreements, the television news report added.

The Vietnamese vice president began an official visit to Cuba on Monday as part of the frequent political, economic and commercial contacts between the two countries.

The first meeting on her agenda was held with Cuban First Vice President Salvador Valdés, with whom she reviewed bilateral relations and agreements and spoke in favor of strengthening economic, trade, investment and cooperation ties.

Ngoc Thinh toured this Tuesday areas of Los Palacios agro-industrial grain enterprise, in the western province of Pinar del Río, where her country collaborates with financing and training in a project to increase by 30% the average yield of rice production.

“This collaboration will surely help ensure food security in the country,” said the vice president of the Asian country.

Vietnam exports rice to Cuba, which aims to reach a production of about 600,000 tons of this cereal per year, one of the products with the highest demand on the island.

Ngoc Thinh is also the standing president of the Union of Women of Vietnam, and according to that responsibility she will hold meetings with the leadership of its counterpart on the island: the Federation of Cuban Women.

Her visit was preceded by that of Deputy Prime Minister and Foreign Minister Phan Binh Minh last May, who was also received by Raúl Castro and Díaz-Canel.

On that occasion, an inter-foreign ministry agreement was signed for the period 2020-2022 in order to strengthen the political dialogue on issues of interest in bilateral and multilateral spheres.

Cuba and Vietnam want to double their trade exchange figures, according to representatives of the two governments.

The Indochinese country is the island’s second trade partner in Asia, after China, with bilateral exchanges that in 2018 amounted to 340 million dollars, with the official projection that they can increase to 500 million dollars in 2022.

Among the areas in which Cuba and Vietnam have or expect to have joint projects and investments are the food industry, renewable energy, science and technology, law and production of consumer goods and construction materials.

Vietnam exports to the island rice, coal, chemicals, textiles and electronics, and imports mainly pharmaceutical products from the island.