"Los sobrevivientes," by Titón, is a parable of what happens in a society that is at the expense of isolation. 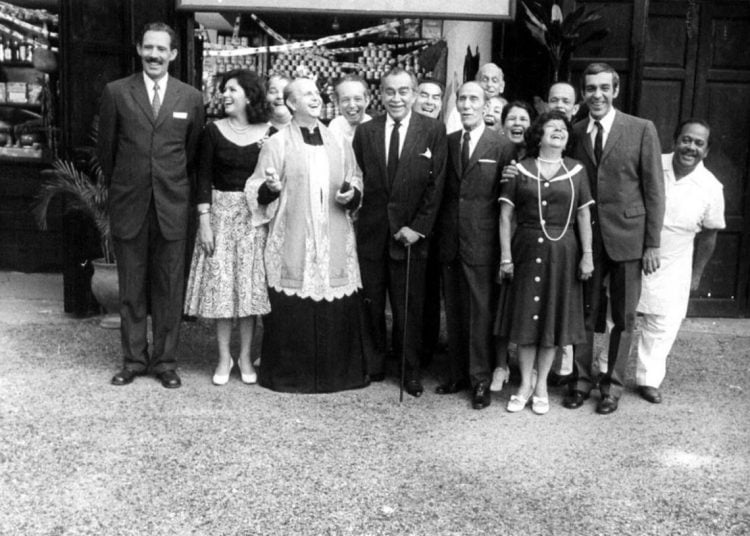 The film Los sobrevivientes (The Survivors) by Tomás Gutiérrez Alea, Titón (1928-1996), always makes me face the same thoughts, because more than a comedy of Titón’s evident and black humor to me it seems like a harsh and persevering satire, the powerful parable about what happens in any society that, for some reason, its own or external, voluntarily or necessarily imposed, is at the expense of isolation.

This film, the seventh in Titón’s career, has reached its 40th anniversary this year. The premiere was on January 6, 1979 and, if it did not happen before, it was due to some delays beyond his control, as he said in letters addressed to friends or ICAIC authorities, such as Alfredo Guevara himself, who at the time was still the president of the film institute.

That correspondence was collected in the book Titón. Volver sobre mis pasos (Unión publishers, 2007), a compilation by Mirtha Ibarra, actress and widow of the filmmaker. This revealing document had a critical edition in 2018 and thanks to it I have re-read the testimonies of those times.

I found out that the shooting of Los sobrevivientes should have started at the beginning of 1977, but it was not until the following year when the conditions were created to materialize it. The plans subscribed by the ICAIC had been altered because the resources were unexpectedly made available to director Miguel Littín, who arrived in Havana to film a production inspired by the novel by Alejo Carpentier, from which it also takes its name: El recurso del método.

Luckily, in January 1978 the team started working and thus began the execution of another of the unforgettable films in Cuban cinematography and that are added to the magnificent work of Gutiérrez Alea; a film also full of amazing anecdotes that enrich and considerably increase his myth.

Los sobrevivientes tells the story of a bourgeois family, the Orozcos, who, frightened by the triumph of the Revolution, decide to withdraw to their Havana estate until the new government finally falls. The story is based on the short story “Estatuas sepultadas,” included in the book Tute de reyes by Cuban writer Antonio Benítez Rojo (Havana, 1931-Massachusetts, 2005).

Benítez Rojo won the Casa de las Américas Prize with this book, making a magnificent debut in Cuban literature. The author has said in interviews that Titón, with whom he worked on another project, only wanted to take the idea of ​​his short story, and thus entrusted him with the film script, whose argument was also enriched by painter Constante (Rapi) Diego and photographer and researcher María Eugenia Haya, wife of the film’s director of photography, Mario García Joya, a great friend of Titón’s.

The collaboration of both Rapi Diego and Maria Eugenia seems to have been so close that both were vital in convincing the owner of the Santa Bárbara estate, the place chosen for the shooting. It was not just anyone, and whoever has seen the film will understand that it’s not just any residence. In fact, due to its cultural, historical and architectural importance, the longtime headquarters of the New Latin American Film Foundation has just been declared a National Monument.

Mirtha Ibarra says that when they were tracking down places to develop the story of the Orozco family, they “by chance” came to this incredible estate located in La Lisa. The ruined aspect, highlighted by the vegetation that was taking over everything, as well as the 32 dogs they found inside, gave the ghostly atmosphere that charmed Titón.

It turns out that poet Flor Loynaz, the youngest daughter of , Enrique Loynaz, the general of the wars of independence, and sister of the writer and winner of the Cervantes Prize Dulce María Loynaz, lived there.

Flor had an incredible life, but (unfortunately) Titón wasn’t telling her story, although it was Dulce María who, at the time of signing the contract with ICAIC for the use of the residence, seeing the title of the film, was ironically driven to exclaim: “Hey, Flor, Los sobrevivientes. That’s us.”

In addition to having shot the film in the magnificent residence of the Loynaz family, the borzois of Ramón Mercader, the man who had murdered Leon Trotsky and who at that time was in hiding incognito in Havana, appear in the film. So, even if he is not seen, the anti-Trotskyite must have been prowling among the actors and cameras while the team concentrated on its work.

All this is part of the myth added to a film that was already mythological and ahead of it time that we have lived as Cubans. Because, although the Orozco family in their incredible mansion was preparing to resist, time passed and the only thing that fell or decayed were the supplies to stay alive and keep up their class. That precariousness forced them to look for resistance alternatives (“After all, resisting has its charm,” says the family’s heaviest drinker, Julio-Vicente Revuelta) before they regress to a complete state of madness and barbarism.

This is how the argument justifies the appearance of one of the characters that have most interested me in the film. We see it after Vicente Cuervo―the family’s representative played by Reynaldo Miravalles―has an incredible idea. Faced by the nationalizations and expropriations, under the pressure of “the communists out there,” he proposes to Sebastián Orozco, the marquis and head of the family played by Enrique Santiesteban (and you have to see the tone and the gestures of Miravalles when saying it by the window!) “doing business under their [the communists’] noses.”

For doing business no one better than Pepe Antonio (baptized as such for the hero who defended Havana during the English invasion), the most skilled of them all. When he gets off a truck with loaded with goods wearing a guayabera shirt, in his language so typical of today’s Habanero, he says: “Mission accomplished. Here are the bills and there is the phenomenon.” “Did you bring it all?” Cuervo asks. And Pepe Antonio happily replies: “Even fish for the cat.”

Carlos Montezuma played Pepe Antonio, and somehow he had already tried these trickster characters, the real survivors in situations of scarcity, cunning and sharp. Since 1966 Cubans knew his Ñico rutina, a character from San Nicolás del Peladero.

Montezuma’s performance shines among this film’s great performances, and his character is ahead of the times in this scene with Miravalles. Because when the latter, in the role of Cuervo, asks him if he had any problem with getting the goods, Pepe responds that he could never have a problem, because, “Listen to me, the issue here is getting around the system.” And in his lively and modern accent, he concludes: “For me capitalism or socialism is the same…, even if feudalism returns!”

Of all the characters in this film, perhaps the one that has proliferated in Cuba today are the Pepe Antonios. None of the others are seen on the streets as much as this one, using his same tone, with the same cunning and sharp jargon, always adapting to the circumstance, the best formula to survive, that is: to resist.