A story based on real events.

by Eric Caraballoso
in Cuba
0 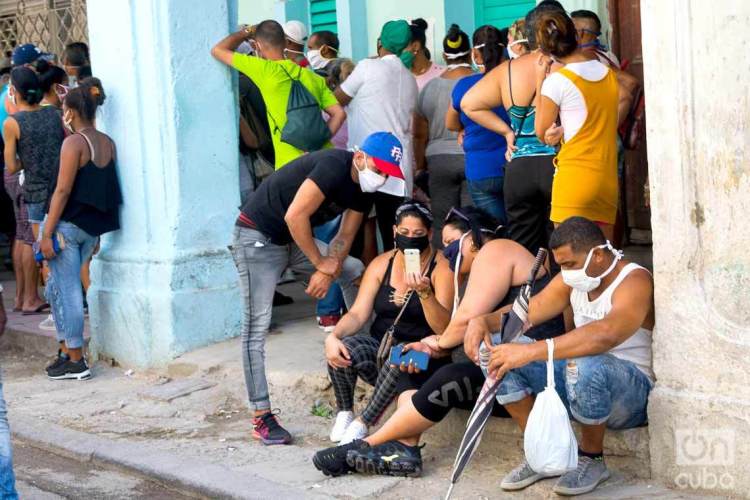 The perception of risk, I read in a synthetic scientific definition as a result of the COVID-19 pandemic, is “a subjective assessment of the probability of having an accident or a disease.” The key concept here is “subjective assessment,” that is, what each one interprets, analyzes, thinks on the matter; but that subjectivity, it is already known, is separated by many objectivities. Or by one, which contains the others: life itself.

A line is objective. Having the fridge empty, too. The refrigerator is never “subjectively” full or empty: it either has chicken or it doesn’t; or it has mincemeat, hotdogs, eggs, sausage or―a miracle―meat, or it doesn’t have them.

Yolanda is a big mulatto woman, one might say plump, who paces from one side of the line to the other, controlling, putting order, imposing her character even behind her facemask. No one chose her for that, she decided to do it herself. And she carries out his task with the discipline of a Tibetan monk, although not with his silence and restraint. People acknowledge her will, they abide by it, although from time to time someone questions it, their spirits rise, and the whole delicate balance of the line is put in danger.

Danger, I read in another synthetic definition, “is an agent that has the potential to cause harm.” The danger of the store running out of chicken, for example. Or that the refrigerator is kept objectively empty. Instead, risk “measures the probability of harm from a hazard” and “hazards only become risks,” I read, “when people are exposed to them.”

Danger and risk, therefore, are not exactly the same, although people confuse them. Although the people in Yolanda’s line hardly care about the difference. For them, who are already in line, who are already “exposed,” the risk that the chicken runs out, that their refrigerator does not receive the packages due to it―or the package, depending on availability and the store’s decision―, is as or more dangerous than an anaconda squeezing their bones.

The line is a big anaconda, one might say plump, that stretches the entire block and crosses the street in search of the other corner. Its head, at the entrance to the store, is controlled by a police officer who tries to keep separated those closest to making their purchases. There it flattens out, thins, goes numb under the stern gaze of the police officer. Another officer walks along the line ensuring that there is distance and calm, issuing mostly sterile warnings. But an anaconda is not appeased with warnings.

Yolanda and the officer cross paths, they recognize each other. Yolanda knows that the police officer is doing his job the best he can, but that he will never be able to control the muscular rings of the human snake on his own. Less there where it dangerously curls, where it piles up and people crowd, spurred on by exhaustion and despair, driven by the danger―in his case the real, palpable risk―of not being able―again―to buy chicken. That is Yolanda’s fief.

The police officer, meanwhile, knows the woman and lets her do her bit. He sees her day after day, while other buyers come and go, grumble, protest, push to get out of the anaconda’s terrible embrace. She, on the other hand, he knows, perseveres on the line, unscathed, unbeatable, astride the thick back of the boa constrictor, oblivious to the danger of being left without chicken―when they sell chicken, she is always able to buy―, indifferent to the risk of getting infected with the coronavirus.

The coronavirus is also objective, like the line; the danger it represents: real. More than 900 cases have been reported in Havana, enough for the authorities to have reinforced the isolation measures. However, life goes on as before. Or almost. Risk perception is inversely proportional to the sale of chicken. Or to possible sales.

It’s not always known if chicken will be sold, it’s never known how long it will last. Yolanda, who lives near the store, manages to stay informed. When there is, when there will be, she places her banner, distributes tickets, organizes the guards, leads the rectification of shifts in the evening and sunrise, sometimes for several days in a row. She doesn’t sell the tickets; she doesn’t charge money to appease the anaconda. (She has decided not to succumb too much to greed, or perhaps she doesn’t want to appear on the news if she is denounced.) Her price is to have more than one place on the line, to always buy chicken, to drive away, before the COVID-19, the risk of having her refrigerator empty.

Neither does she do this alone, she has her entourage, her court of regulars, satellites as indifferent to the threat of the coronavirus as she is, like the rest of the line, more concerned about the danger of the absence of chicken than catching a disease that has infected more than five million people and killed hundreds of thousands worldwide.

“You can’t live if you don’t eat,” is all the answer I get when I ask her, from a distance, with a facemask, why she does what she does. Yolanda, who is not really called Yolanda, or maybe yes, but who in another place―in another people’s council, in another municipality, in another province, in another store―can be called Gladys, or Yaniuska, or Luisa, or Roberto, and not being big, or rather plump, like the line, saves words and efforts for what she truly believes is worthwhile, appeasing the anaconda, for example, filling the refrigerator. Rather than answering someone who asks about perceived risk.

“You can’t live if you don’t eat,” she repeats. And she goes to the head of the line, where it’s already her turn. Meanwhile, I, with the number 98 written in a small cardboard rectangle, cross the street, as far as possible from the others who are waiting, and I think, resigned, that if not today, at least tomorrow, I could buy.