Mexico and Brazil, the region’s two most populous countries, broke their record of infected and dead almost daily this week, fueling criticism of their presidents, who have eased quarantines in a bid to limit economic damage. 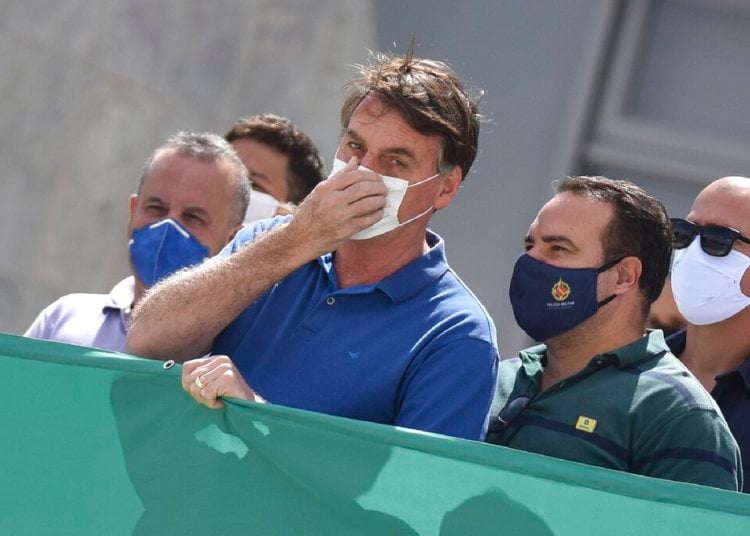 President Jair Bolsonaro touching his facemask during a protest against the Federal Supreme Court and the National Congress in Brasilia. Photo: André Borges/AP.

New coronavirus cases dropped to zero in China for the first time this Saturday, but they increased in India. In Latin America, hospitals were overwhelmed by the amount of patients, both in countries lax with respect to quarantines and in those that have been praised for adopting firm measures of social distancing.

Many governments are easing restrictions as they face historic recessions caused by the pandemic. Its persistence has placed the authorities in the dilemma of finding a balance between the urgency to revive the economy and the fear of health risks.

China did not report any contagion this Saturday for the first time since the start of the pandemic, which emerged there late last year.

In South Korea, there were 23 new cases, mostly in the densely populated metropolitan area of ​​the capital Seoul, where authorities closed thousands of nightclubs, bars, and karaoke rooms to curb transmissions.

In early March, South Korea reported around 500 new cases daily until it began to use an aggressive tracking and testing policy to stabilize the outbreak. More than 200 of the latest infections were linked to people who attended nightclubs in the Seoul metropolitan area when the nation started easing restrictions.

In Japan, a group representing bartenders and nighttime leisure workers presented their guidelines to protect workers with the reopening. They should wear masks, gargle every 30 minutes, and disinfect the karaoke microphones after each use.

The Bank of Japan, which recently announced measures to facilitate loans in the world’s third largest economy, said in a joint statement with the government: “We will work together to return the Japanese economy to a solid growth trajectory after the pandemic.”

The number of new daily cases in the country fell to double digits, and deaths related to the virus are below 800.

In the United States, the control measures interrupted Memorial Day’s long weekend. This is the day that the country commemorates the men and women of its armed forces killed on duty. The pandemic also interfered with collective celebrations across the Muslim world that mark the end of the holy month of Ramadan.

Latin America is the new global epicenter of the coronavirus. Experts have stressed the limits of government action in a region where millions of people have informal jobs and many police forces are weak or corrupt.

Mexico and Brazil, the region’s two most populous countries, broke their record of infected and dead almost daily this week, fueling criticism of their presidents, who have eased quarantines in a bid to limit economic damage. However, the infection rate also increased in countries previously praised for the imposition of business closings and early and vigorous quarantines, such as Peru, Chile and Ecuador, where intensive care units were overwhelmed by the high number of patients.

Brazil confirmed more than 330,000 cases, surpassing Russia to position itself as the second nation with the highest number of cases, only behind the United States, which has 96,000 deaths and 1.6 million infections, according to specialists from Johns Hopkins University. Brazil also registered more than 21,000 deaths, although scholars believe the number is higher.

In the United States, some regions are opening faster than others. President Trump is pushing for state and municipal authorities to move faster in lifting the control measures.