The brigade, belonging to the Henry Reeve medical contingent, with 37 doctors and 15 nurses, had arrived in the town of Crema on March 22 to help in the battle against the pandemic in a field hospital installed in the municipality at the beginning of the crisis and which will start being dismantled this Monday. 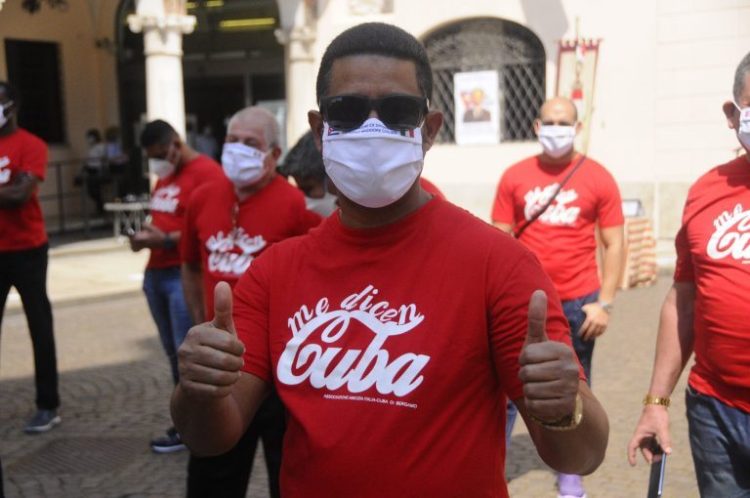 Members of the Cuban medical brigade in Lombardy, Italy, in the farewell ceremony after completing their work in the fight against COVID-19. Photo: Cubadebate.

The brigade of Cuban doctors and nurses who arrived in Italy to collaborate in the fight against the coronavirus ended their mission this Saturday in the town of Crema (in northern Italy) and was bid farewell to the applause of neighbors and authorities.

“We were shipwrecked and you succored us without asking us our name or origin. After months of mourning, anguish and doubts, now we see the light,” said Stefania Bonaldi, mayor of the municipality of Crema, in the region of Lombardy, the most affected by the virus in the European country.

The brigade, belonging to the Henry Reeve medical contingent, with 37 doctors and 15 nurses, had arrived in the town on March 22 to help in the battle against the pandemic in a field hospital installed in the municipality at the beginning of the crisis and which will start being dismantled this Monday.

In these two months they have collaborated in the Cream Intensive Care units and the radiology, pulmonology and pharmacy departments.

The Cuban health workers were bid farewell with a ceremony of gratitude in the central plaza of the cathedral of Crema and with the applause and cheers from neighbors and local and regional authorities.

In addition, they received commemorative plaques and medals with the flags of Italy and Cuba, on the back of which could be read: “To our Cuban brothers of the Henry Reeve brigade with infinite esteem and eternal recognition. City of Crema.”

The mayor recalled that Cuban aid came at “a time of unprecedented uncertainty and danger” and was “an effective medicine.”

“When you got here, you said that your homeland is the world and from now on you will be our compatriots in this big world, often mistreated by the absence of the supreme value of solidarity,” said the mayor, protected by a mask.

The event was attended by the Cuban Ambassador to Italy, José Carlos Rodríguez Ruiz, who appreciated the worth of this medical contingent established in 2005 and who lent its knowledge in disasters such as the Ebola crisis or earthquakes in Pakistan and Haiti.

This was the first time that the medical team had provided aid to a European country, to Italy in particular, and the ambassador assured EFE news agency that when they finished their work, they had “greatly benefited with the respect and admiration of citizens and the healed cared for by them.”

“What you see in this square with the people of Crema greeting our doctors so sincerely is something that cannot be said will end, it is something that is born. The beautiful friendship between Italy and Cuba is reinforced. It shows that love is paid back with love,” he said.

The president of the Lombardy region, Attilio Fontana, applauded the Cuban contribution on his social networks: “They were the first to accept our request for help and the last to return home. Thank you,” he wrote on Facebook.

The head of the brigade, Carlos Ricardo Pérez Díaz, an internal medicine specialist, explained to this agency that the experience in Italy, working together with the doctors at the field hospital and at the Mayor de Crema hospital, has been “unforgettable.”

“We have had a very good scientific exchange that has allowed us to enrich each other. The gratitude of the patients, of the people, we also carry that in our hearts and enriches our professional and medical endorsement,” he said in the town square.

Dr. Pérez Díaz pointed out that they will remain “as long as necessary” and assured that “if any other region or place in the world needs the help of our modest efforts” they will leave to offer their “solidarity aid.”

Meanwhile, a second Cuban team of health workers made up of 21 doctors and 16 nurses, as well as a logistics coordinator, arrived on April 13 to help in the Italian city of Turin (northwest). Cuba has sent more than 2,500 health professionals to some 20 countries during the pandemic.

Italy has registered 32,735 deaths and 229,327 infected with the coronavirus since the first local case was detected on February 21, precisely in this same region, Lombardy.

Three months later, the pandemic curve continues downward and, for this reason, Italy started easing movement restrictions and resumed its trade, although always attentive to the evolution of the coronavirus and with security measures.