Dr. Gerardo Guillén Nieto, director of Biomedical Research at the Center for Genetic Engineering and Biotechnology, said the vaccine to strengthen innate immunity to COVID-19 is in the final phase of study. 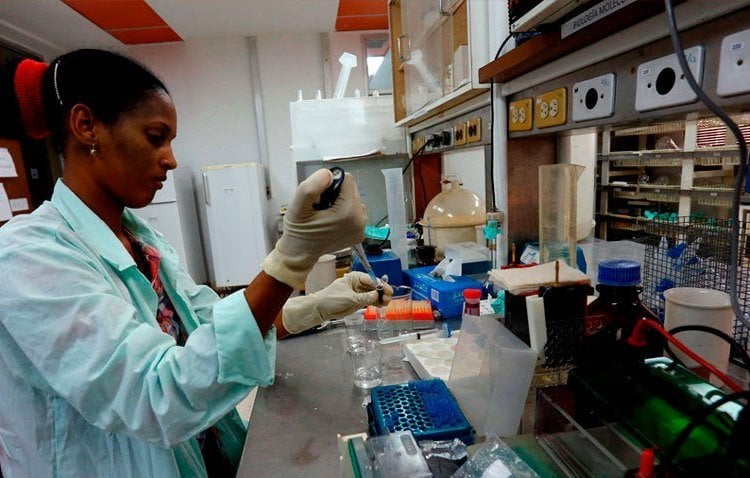 Specialist at the Center for Genetic Engineering and Biotechnology. Photo: Invides.

The president of BioCubaFarma, Eduardo Martínez, highlighted in the Mesa Redonda television program that in the fight against the coronavirus, his institution has a plan that covers different aspects, one of which is to guarantee the medicines designed for the protocols. He ensured their availability for patients who could be diagnosed, even in the worst case scenario.

He said that BioCubaFarma has also joined the production of soaps, disinfectants, hydroalcoholic solutions and protection means. He added that the antiviral action of interferon has been shown to be effective in treating the disease, along with other products developed by the biopharmaceutical industry. He said that many countries had asked Cuba for support in the supply of medicines. To date, 62 nations have requested interferon.

He insisted that asymptomatic patients constitute the fundamental cause of the spread of the epidemic; hence the importance of mass screening to identify suspects and isolate them. It is an international and local challenge, he said. This April 12, more than 2,000 tests were made in Cuba to diagnose the disease.

For his part, the director of the Finlay Vaccine Institute, Dr. Vicente Vérez, reported that even though the search for a vaccine will take time, there are other options to improve patients’ immune systems.

Cuba, he said, today has two vaccines used to fight both cancer and allergies, and they will start being applied to risk groups. Their purpose is aimed at strengthening people’s immune system. He explained that several researchers are working on a project aimed at finding out the incidence of these vaccines in patients to prevent them from developing a serious condition.

However, he said that the most important thing was social isolation, the use of the facemask and eyeglasses. All this makes it possible to put up a barrier against the virus and decrease the viral load in case of illness.

The director of the Center for Genetic Engineering and Biotechnology, Dr. María del Carmen Domínguez Orta, said that the institution has a research base of 20 years. A specific product, Molecule 258, is intended to regulate people’s immune systems and control inflammation of the organs without generating immunosuppression.

It has been applied, she said, in three critically ill patients at the IPK and the Naval Hospital with positive results, but, she pointed out, it is only used when there are no other options and with the prior consent of family members.

She stressed that this medicine is not a cure, but a therapeutic alternative, hence the importance of complying with prevention measures.

Lastly, Dr. Gerardo Guillén Nieto, director of Biomedical Research at the Center for Genetic Engineering and Biotechnology, said that the vaccine to strengthen innate immunity to COVID-19 is in the final phase of study.

“The vaccine, which is applied sublingually, enhances immunity to the entry of the virus,” he said, explaining that the samples analyzed after the application of the drug confirm that it stimulates the molecules that mark the activation of the innate immune system.

That vaccine will be favorable to the most vulnerable groups and will help them stimulate the immune response against the virus.