The Cuban Biotechnology and Pharmaceutical Industries Business Group (BioCubaFarma) announced on Twitter the sending of the doses “as part of the collaboration with other countries in the development of COVID-19 vaccines.” 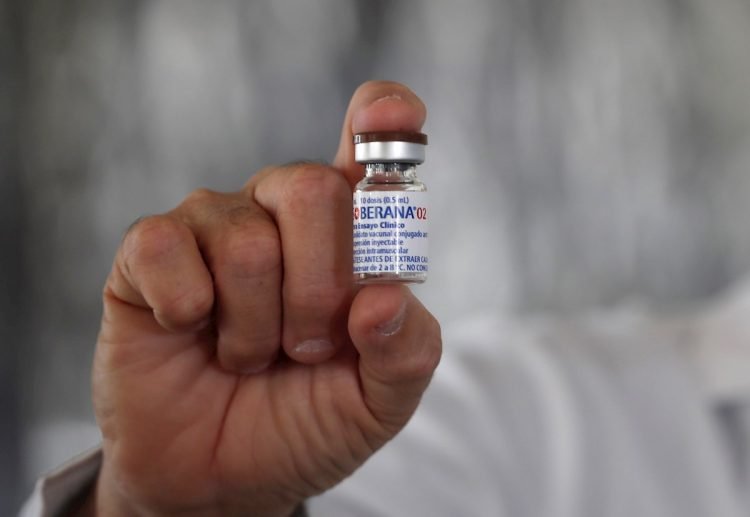 In the image, a sample of the Cuban Soberana 02 vaccine, on February 25, 2021, in Havana (Cuba). Photo: EFE/Ernesto Mastrascusa/Archive

Cuba sent to Iran 100,000 doses of its Soberana 02 coronavirus vaccine candidate, the most advanced of the five developed by the Island, to carry out a clinical trial in that country in which the efficacy of the formula will be tested, official sources announced this Friday.

The Cuban Biotechnology and Pharmaceutical Industries Business Group (BioCubaFarma) announced on Twitter the sending of the doses “as part of the collaboration with other countries in the development of COVID-19 vaccines.”

“100,000 doses of Soberana 02 were sent to the Pasteur Institute in Iran, which will be used in clinical trials in that country,” the state entity’s publication indicated.

Last January, the Finlay Vaccine Institute (IFV) of Havana and the Pasteur Institute of Iran signed an agreement to complement the clinical trials of the potential Soberana 02 vaccine, expected to be in its third and final phase, which is the one that proves the effectiveness of the drug on a large scale.

This candidate began this week in Cuba the last trial phase, which will be carried out in Havana—the area of ​​the island with the highest infection rate—and will involve 44,010 volunteers between 19 and 80 years old.

The director of the IFV, Vicente Vérez, had already advanced days ago on the prospects of testing Soberana 02 in other countries where the pandemic shows “changing scenarios,” so a single phase 3 trial like the one that has just begun in Havana is not enough and it is necessary to have others in areas with different incidence rates.

The scientist pointed out that they were working on agreements with countries and added that they would be made public as they were authorized.

Iran is at the moment the only country with which the island has a signed agreement to do so, although the government of Mexico has indicated that it is open to this possibility.

Soberana 02, for intramuscular application, is a subunit vaccine that combines the virus antigen and tetanus toxoid, and also uses aluminum hydroxide to stimulate the response of the immune system.

Of the 76 vaccine candidates in the clinical trial phase there are currently in the world, the Cuban formula is the first of those developed in Latin America to advance to the last stage of testing, and if successful could be the first Latin American COVID-19 vaccine.

The Caribbean country is also investigating four other possible vaccines, one of which, called Abdala and developed by the Center for Genetic Engineering and Biotechnology (CIGB), is also approaching the final stretch of clinical trials.

Cuba, which to date has a total of 59,919 cases of COVID-19 and 365 deaths from the disease, has a recognized biotechnology and pharmaceutical industry that currently produces eight vaccines against diseases such as meningitis, lung cancer (therapeutic) and solid tumors, among others.

The Cuban government has bet everything on its own vaccine, since it has not acquired doses in the international market nor is it part of the 33 Latin American countries that have joined the Covax Mechanism, created under the auspices of the World Health Organization to favor equitable access to immunization for low- and middle-income nations.