Irma hits Caribbean with all its force 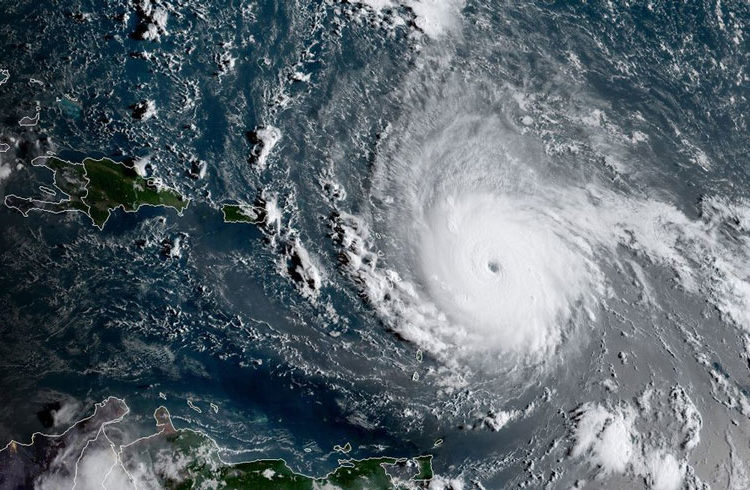 The “potentially catastrophic” Hurricane Irma, with a category 5 (maximum) on the Saffir-Simpson scale, is continuing its passage through the Caribbean after having impacted with all its force the island of Barbuda early this morning.

Irma, which is already considered the most powerful hurricane of the Atlantic, has sustained winds of 295 kilometers per hour and is now headed toward the northwest. It has slightly speeded up its movement, which this morning was 26 kilometers.

At six in the morning of this Wednesday its center was estimated at 55 kilometers to the east southeast of the island of Saint Martin, a group north of the Lesser Antilles.

It is previewed that in the next 12 to 24 hours it will maintain a similar course and movement speed with possible fluctuations in its intensity, although continuing to be an intense hurricane. In this trajectory, its center passed this morning in the vicinity of the island of Saint Martin, where its winds and swells have already wreaked havoc.

According to a probable trajectory pattern outlined by the National Hurricane Center of the United States, Irma’s “extremely dangerous” eye will move this Wednesday evening over the north of the Virgin Islands, it will pass close or just to the north of Puerto Rico this evening or tonight and close or over the northern coast of the Dominican Republic on Thursday.

Once it has passed over the Dominican Republic, Irma will head for the Bahamas, to the north of Cuba and will arrive in the U.S. state of Florida this weekend.

According to the Cuban Institute of Meteorology, the intense hurricane should affect the island’s eastern region in the next 48 to 72 hours, which is why the institution recommends paying attention to the information issued by the Forecast Center and the Civil Defense (DC).

The Informative Phase was declared this Tuesday for 11 Cuban provinces, from the eastern Guantánamo to the western Matanzas. In this phase – the first of the four established on the island to face meteorological events – the command posts of the DC are activated and tasks involving the cleaning of rooftops, drainages, sewers and the pruning of trees that can obstruct electricity lines are carried out.

In a meeting of the National General Staff of the Civil Defense (EMNDC), its chief, retired Division General Ramón Pardo Guerra, underlined that it is a phenomenon much more powerful than Hurricane Ivan, which passed through the island in 2004 and forced the evacuation of more than two million people.

That is why, he said, “the population must remain attentive to the information of the Cuban Institute of Meteorology and the Civil Defense, and carry out with discipline the measures indicated by the local authorities.”

This Tuesday it was also established that “the state bodies and agencies, economic entities and social institutions of the provinces that are in the Informative Phase must rationally carry out the measures previewed in their respective disaster reduction plans.”

Pardo affirmed that the Cuban authorities “are taking all the measures” and underlined the importance of “transmitting confidence to the population” and that the plans to protect persons, their homes and the economy’s goods be met.

Irma in the Caribbean. Behind, Tropical Storm Jose. Source: Cuban institute of Meteorology.

In the face of the threat of this “extreme” meteorological event, the DC has oriented pruning trees, safeguarding harvests, readying the communication systems, speeding up the sanitation measures and ensuring infrastructures and the availability of fuel.

Irma’s eventual wreaking havoc over Cuba brings to mind the devastating passage of Matthew, a force 4 hurricane that in October 2016 unleashed its fury on the eastern zone of the island, particularly in the locality of Baracoa, where – although it did not cause victims – there still remain traces of the considerable material damages.

The entire Caribbean is on alert, after the passage through Antigua and Barbuda, where great damages were reported in homes and electric infrastructure. The greatest damage was registered to the north of the island, although it still hasn’t been assessed.

In Saint Martin, toward where Irma went following this, winds of up to 295 kilometers per hours have been measured. Several inhabitants told the press about the strong floods and that during the hurricane’s passage “roof tiles and all types of objects like tree trunks and urban furniture rained” over the island.

In the south of Florida, where a state of emergency has already been declared, it was ordered to evacuate the keys, a string of islets on the tip of the peninsula, in the face of the possibility that the hurricane attack that zone this weekend.