Of the total, 37 coronavirus contagions were detected in the province of Santi Spíritus, most from the municipality’s capital city (20), which confirms the dangerous outbreak of the disease that that territory is experiencing. 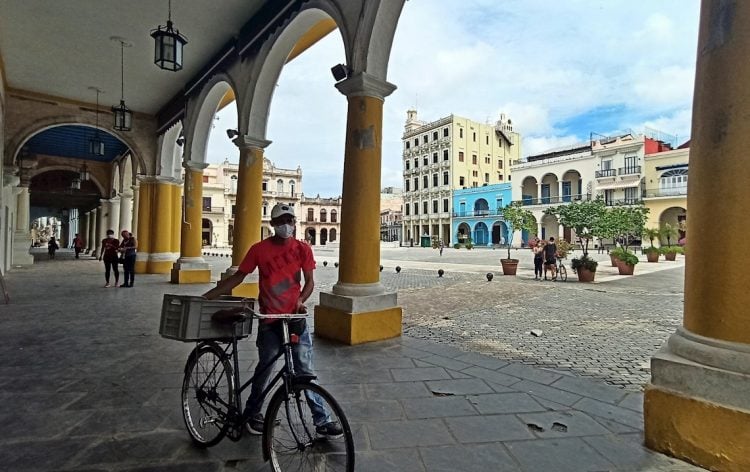 A man with a mask walks his bicycle through a square in Old Havana. Photo: Ernesto Mastrascusa/EFE.

The province of Sancti Spíritus, in central Cuba, registered more than half of the 62 new COVID-19 reported on the island at the close of this Friday, according to the report by the Cuban Ministry of Public Health (MINSAP).

Of the total, 37 coronavirus contagions were detected in the province of Santi Spíritus, most from the municipality’s capital city (20), which confirms the dangerous outbreak of the disease that that territory is experiencing.

The rest of the reported cases correspond to Havana (16), Ciego de Ávila (7) and Mayabeque (2). Thus, the number of patients detected on the island since the beginning of the pandemic reached 5,780, while the number of deaths remained at 122 as no new fatalities were reported in recent days.

As for the recovered patients, there are already 5,118, with this Friday’s 40 discharges. Meanwhile, active cases today amount to 538, of which 533 are in a stable clinical condition, one patient is in critical condition and four in serious condition, according to MINSAP’s official report.

Of the 62 newly registered patients, 61 are Cuban and one foreign. Furthermore, 60 are autochthonous cases, all contacts of previously confirmed cases, and two are imported, while 44 were asymptomatic at the time of their diagnosis.

Finally, at the end of this October 2, a total of 5,754 patients were hospitalized for clinical epidemiological surveillance, of them: 4,194 under surveillance, 1,022 suspects and 538 confirmed.