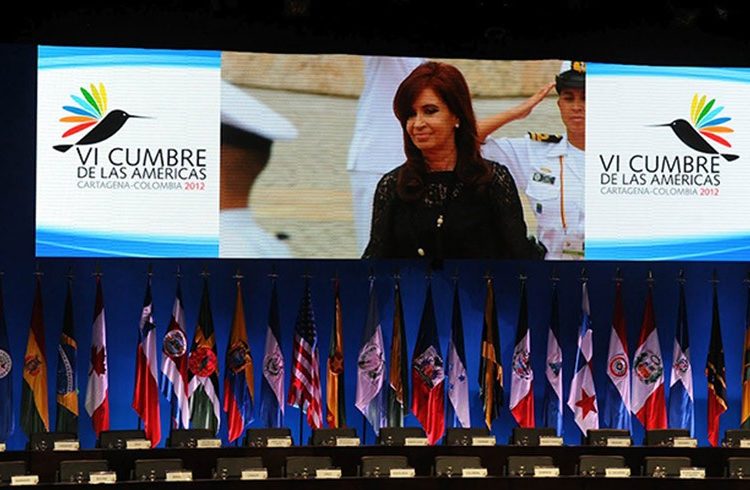 United States has had to yield to pressure from Latin America and accept the participation of Cuba at the Summit of the Americas. Barack Obama had no choice, having held the veto would have meant the end of these presidential meetings.

Washington tried to press as much as it could, but several major countries in the region warned it that they would not go if Cuba was excluded. Really with minimal analysis of the regional situation they could have saved the reversing of its position.

Currently 4 countries in Latin America (Brazil, Uruguay, Nicaragua and El Salvador) are governed by leftist guerrillas. They are the very same the USA used to call terrorists and fought, arming and advising counterinsurgency armies.

In return, Havana became in those years their regional rearguard, in the hospital to where the wounded were sent and sometimes, in training camp to prepare fighters in guerrilla tactics.

Leading Chile is no one else than socialist Michelle Bachelet, whose father was arrested and died in prison after the coup of General Pinochet, who was supported by Washington to overthrow the constitutional president, Salvador Allende.

The President of Bolivia is that young coca farmer who the US called trafficker. From the beginning of his political career, Evo Morales, the first indigenous Latin American who runs a country, only had the international support of Fidel Castro and Hugo Chavez.

Ties with Caracas are widely known and the political alliance is the strongest of all because oil is as important for Havana as the Cuban collaborators are in order to keep up the social missions of Venezuela.

But the Cuban medical contingent continues to spread throughout the region, more than 11 thousand already working in the depths of Brazil, in the slums, in the forest and fields where no local doctor wants to go.

The Cuban mission in this country is so important that in a couple of years of work Havana could payoff Brasilia with the construction of the port of Mariel, allowing Cuba to receive large vessels and create a special development and trade zone.

As if all this were not enough, relations between Washington and Brazil are very tense after the recent revelation that the American intelligence services were spying on the communications of President Dilma.

Other 1000 Cuban doctors already working in Ecuador, whose president, Rafael Correa, has a clear leftist political identification with Havana. Cuba also has the continued support of Argentina’s President, Cristina Fernández.

USA has it hard even with its regional allies. Mexico is in the rapprochement with the government of the island, to which it wrote off most of the debt and offered new loans to strengthen bilateral trade, after years of stagnation.

Colombia, the other major ally of Washington, is engaged in peace talks with the main guerrilla group. Bogotá has a debt to Cuba, a country that has facilitated dialogue and whose territory is used for meetings between the insurgents and the government.

The main countries of Latin America have close relations with Cuba.

Washington’s policy against Havana is so outdated that globally it is only supported by two countries. In the Americas it has no supporter, in fact all governments have diplomatic relations with Cuba, except the USA.

Even his former Secretary of State, Hilary Clinton, recommended Obama to normalize the situation. Maybe if he had listened he would have been spared from the embarrassment of having to back down under pressure from a group of countries that one day were considered as the “backyard” of the United States.