After the feature article published by OnCuba about Cubans and Ecuadorians who were unable to return to their place of residence in both countries due to COVID-19, some people who are still stranded on the island requested a second approach to the issue.

alexispirerojas
in Health in Cuba
0 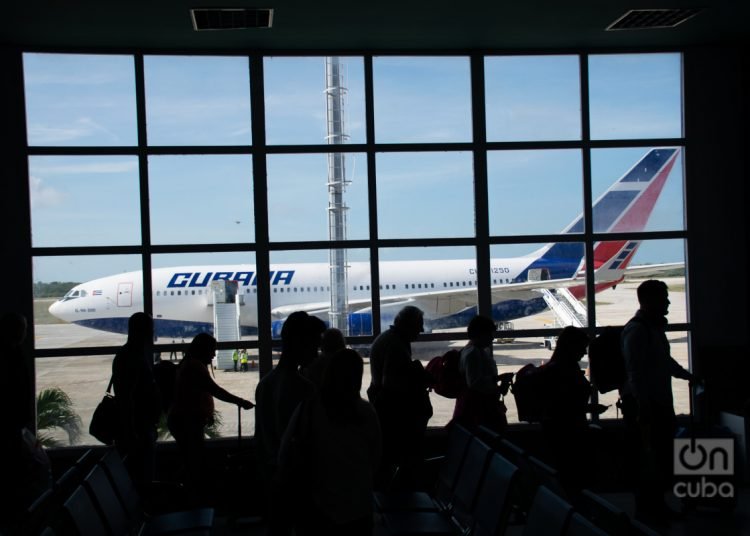 Two of the three humanitarian flights made to date between Cuba and Ecuador were operated by Cubana de Aviación. Photo: Kaloian Santos.

For some, the pandemic is water under the bridge; others constantly challenge it, avoiding the new normality. A large part even ignores it. Others find it impossible to look askance, as they still have not awakened from the nightmares caused by the spread of the virus. This is the case of people who still haven’t arrived home.

There are still Cubans who remain on the island, of those who came for a visit of a few days and have been waiting for months to be able to use a return air ticket. For those who are residents in Ecuador, each day of their stay on the island takes away a piece of the life they have built in Andean lands.

In June, OnCuba published a feature article on the subject, which showed the obstacles faced by these Cubans and Ecuadorians who were in Cuba when the borders were closed to return to the country where they live. After three flights labeled “humanitarian” (two with Cubana de Aviación and one with Copa Airlines), more than 200 people still remain stranded in Cuba, between Cubans and Ecuadorians.

The decrease in COVID-19 contagions at the beginning of June in both countries made many of those affected feel that a return to normality was around the corner. But the pandemic has no corners to see definitive solutions; rather it presents a curve that rises and falls at the same rate as uncertainty in most of the world, especially among those who remain stranded.

Such is the case of Ecuadorian María Elisa Recalde: “I didn’t think this situation was going to take so long. My financial situation is very unstable. I’m studying in Cuba, I stayed a little longer to take advantage of the time with my tutor in Havana, but I didn’t think this would happen. When it seemed that everything was going to return to normal, it has become more difficult, since humanitarian flights are no longer scheduled and the borders are still closed.”

Six years can come to an end in four months

Yipsi Domínguez traveled to Cuba on March 2 with a return date for March 28. She’s lived in Ecuador since 2014. In the Andean nation she lives in the parish of San José de Minas. There she undertook an ecological tourism project that has brought her many fruits. “It has not been easy. The migrant’s story is always difficult, but I managed to materialize my dream. I have a production and marketing project for several hectares of avocado, also a home-made jam undertaking and accommodation space for national and international tourists. Even my farm is linked to the Universidad Central del Ecuador’s tourism career.”

When Ecuador’s borders closed in mid-March and the Copa Airline return ticket had to be postponed until a further, distant and still indecipherable notice, the entire pedestal on which Yipsi’s achievements began to fall apart. “Unable to return, my dreams were destroyed. My little animals are dead, crops are devastated, my six-year efforts are disappearing. Even the Ministry of Agriculture in Ecuador was assessing a lemon jam project that I was presenting. The engineer in charge of these matters in Quito was amazed at what she was achieving with local productions. All of that went down the drain. My sculpture workshop… also down the drain.”

I ask her if she has someone who can take care of the project. Yipsi is married to an Ecuadorian, however.… “As a woman, I am the victim of my husband. This is a nightmare. The pandemic is bringing out the worst in people, the evil is wreaking more havoc than the virus itself. My husband has refused to help me; he says it’s my problem. He grabbed that production of avocados and sold it for his profit, he did the same with my half Spanish mare. To make matters worse, taking advantage of this situation, he tells me not to return, to stay here.”

“It’s true we had our problems. In fact, when I was to return from Cuba, we were going to get divorced. But we agreed to respect each other until the divorce papers came out and what he did was get rid of me in the dirtiest way. I don’t even know if when I return I’ll be left out in the street. It’s not fair. With this situation I can’t sleep and have lost my appetite.”

Yipsi did not go to Cuba on vacation, she had a very compelling reason for the trip: “I came because my mom was going to have cataract surgery. From there I brought her the intraocular lenses. This operation could not be completed due to the pandemic. Now they tell me that it is not known when it may be, since there is a lack of supplies. Anyway, this is terrible everywhere.”

The economic situation of this Cuban is quite complicated. She has found it difficult to pay an additional ticket on a humanitarian flight and, therefore, awaits the possibility of using the Copa ticket she already had purchased. However, she denounces the lack of response from the airline. “Copa is not interested. It is disrespectful to its clients. They said they were going to prioritize scheduled flights from March and nothing happened. Paying a higher price is very difficult for me. Anyway, I’m already selling my tablet, camera and one terabyte memory. I need to return to Ecuador.”

Klever García, from Quito, says that his 50-year-old Cuban wife and his Ecuadorian son (21) traveled to Cuba in March. “She went to say goodbye to two uncles who were in very poor health, in fact, they have already passed away.” Klever also presents a broad overview of the drawbacks resulting from so much time apart. Life has become very complex for him.

“Just imagine, we have a restaurant and a vegetable outlet; my wife is the one who takes care of it. With her absence, I had to close the business, because I have my job and I can’t lose it. I have tried to open the outlet, but we also have a small son who’s here with me. Carrying out my job’s obligations, taking care of the business, the child.… It’s been very hard.

“On the other hand, my oldest son, the one who’s in Cuba, is studying architecture here in Ecuador, at the university. He has missed many classes; he has hardly been able to connect to the internet to receive the subject matters. He’s continued making an effort to lose the semester, I also help him by sending in the assignments. Luckily, in college they have been quite understanding, but there are many things that he hasn’t been able to comply with, such as online exams.

“I hope this whole situation can be resolved. My family didn’t come on the humanitarian flights because we preferred to wait a bit, well imagine, here they had to spend about 14 days in Mandatory Preventive Isolation (APO) in a hotel.” The costs of this stay can exceed a thousand dollars, and to this is added the prices of the tickets at almost 500 dollars each. Again the economic situation becomes a knockout blow to the chin.

Between the confidence that the situation would improve, the decrease in income and the increase in expenses in the family economy, time takes its toll with a delayed separation and no certain expiration date.

“In Cuba life is much more expensive”

So says Alain López, who has also been on the island since March. The young man was fired from his job in Ibarra, Ecuador. They have already paid his settlement (compensation for the termination of an employment contract). But still, “it’s not enough for anything. I live alone, I have all my things there in the house, so I have to continue paying the rent, well, as if it were a warehouse. Add to that the fact that I’m unemployed and that life here in Cuba is becoming more and more expensive, even more than in Ecuador.

“Food in Cuba is expensive. The basic need products or those one is able to get at a higher price are missing. For example, a tube of toothpaste that in Ecuador costs me one dollar, here it costs me five. There are lines for everything, as of the early morning, well…. Not counting all I spend on internet connection, but I have to connect every day to ask my neighbor how everything is with the house. She tells me fine, but you know, it’s very difficult, all my things over there are unattended, the ones that I was able to obtain with so much sacrifice.”

At the climax of the conversation, the common phrase for everyone jumps out, the one they seems to be shouting in chorus: “I need to go to Ecuador now!” Alain sent his details several times to be included in one of the humanitarian flights made between May and the beginning of June, but his name was never on the passenger list. Then, he was left waiting for the borders to be opened to, at least, use the ticket that he already had bought on Copa.

Nor has he had that “luck.” Faced with the postponement again and again of the opening of the Panama City airport (scheduled for now for September 4), the airline has operated several humanitarian flights. With the Cuba-Ecuador connection, only one has been made. “Real humanitarian flights would be to take all Cubans who have tickets with them and have been stranded here for four months. We are quite a few. The situation is desperate,” said Alain.

The Cuban Consulate in Ecuador has insisted through messages that they have taken steps so that Cubans stranded on the island can return. Given this, Copa has told them that their planes are under maintenance. According to a statement issued by said consular section on July 30, a humanitarian flight will be made on August 11, operated by the VivaAerobús airline, based in Mexico. This time, the waiting list for stranded people will not be exhausted either.

“I no longer mind paying, I have to go now. Now it will be to continue with the battle so that Copa returns the money. The Consulate told me that we should complain to Copa, because if they are not going to make the flight, they must refund the money.”

Actually, Copa has notified people whose ticket was canceled that they can use it until the end of 2020, without offering a direct refund option. So far, the young man has called the airline several times and always gets the answering machine, which obviously does not provide him with any information about humanitarian flights or the ticket refund.

Thus, the pandemic also reveals that customer service and humanitarian aid must be more than a slogan. Every dawn of a person stranded anywhere in the world contributes to despair. From Cuba, María Elisa, Yipsi, Alain, Klever’s family and many others, trapped in the nightmare of surviving for several months away from their home, can testify to this.