As part of a government plan, transportation and urban mobility will be until 11:00 pm, while the hours of bars, restaurants and nightclubs were also restricted until 9:00 pm, and the ban was ratified on concerts, shows and mass events, including public, recreational, sports and religious activities. 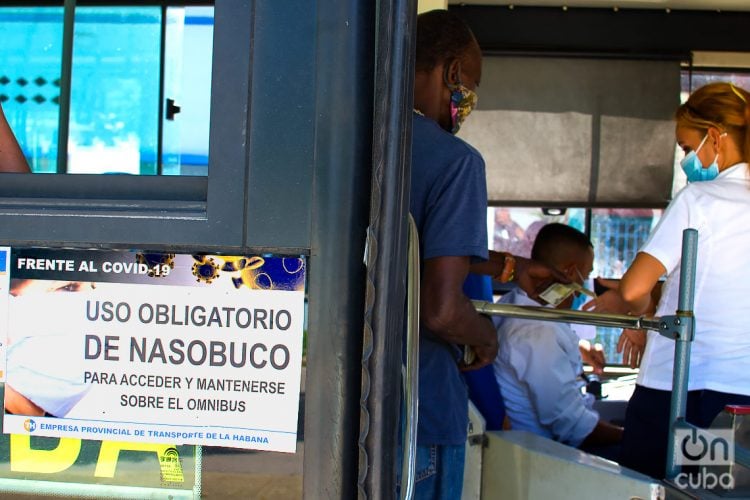 Mobility within and from Havana to other nearby provinces will be restricted, as part of a plan of measures approved by the Cuban capital’s authorities to curb the increase in COVID-19 cases the city has experienced in recent days.

The plan, which was confirmed this Thursday by the island’s government, includes sanitary, social and transportation regulations, and will start being applied next Saturday, except for the measures related to transportation, which will take effect next Monday, as reported by Tribuna de La Habana.

Among the measures announced at the daily meeting of the Provincial Defense Council (CDP) are the limitation of urban transportation and the mobility of people in the capital until 11:00 pm, the restriction of transportation―including the state-run―between Havana and the provinces of Matanzas, Artemisa and Mayabeque, and the establishment of border control points with the presence of health personnel, inspectors and police officers.

Similarly, Tribuna points out that passenger boarding points on highways and roads will be paralyzed and vehicles are forbidden from having more than eight seats without authorization, the maximum of 40 people standing in articulated buses and 20 in rigid buses will be restored, hygienic measures will be reinforced in the means of transportation, and the regulations for movement between Havana and the Isla de la Juventud will be maintained.

However, it clarifies that the transportation services to hotels and camping bases, where there are health and safety protocols to avoid contagions with the coronavirus, are maintained, as well as those for “exceptional cases” related to health problems.

As part of the plan, the hours of bars, restaurants and nightclubs were also restricted only until 9:00 pm, with the ban on dances and a minimum distance of one and a half meters between tables and stools in bars. At the same time, the ban was ratified on concerts, shows and mass events, including public, recreational, sports and religious activities.

In addition, the screenings will be intensified and the healthcare services will be reorganized so that more health professionals can join this work in the communities; the aim is to “increase” real-time PCR tests, particularly in the highest-risk municipalities, with at least 2,240 daily tests; and control will be increased in isolation centers and hospitals to “verify discipline and compliance with established protocols.”

The access of workers with respiratory symptoms, risk factors and those over 65 to work centers in Havana is also “totally” prohibited, and attention to vulnerable people will be reinforced, including professionals such as barbers, hairdressers, manicurists and seamstresses, due to their greater social contact with other people.

When reporting on the measures, Luis Antonio Torres Iríbar, president of the Havana CDP, assured that “today there is a clear roll back of the epidemiological situation” and explained that “this situation has to do with poor screening activity by healthcare teams, relaxation of hygienic-sanitary protection measures, non-use of the mask, lack of disinfecting products in workplaces, systematic violation of directions in bars, cafes, swimming pools and other centers, mainly those open at night,” “increased urban mobility with many cases of violations of the established measures, as well as violations of security protocols in healthcare centers, which have resulted in the contagion of health personnel.”

Torres Iríbar lamented the “notable loss of risk perception in a part of the population” and said that “the relaxation in many of the leaders at the forefront of core processes in the confrontation against COVID-19 has been even worse.” Likewise, he called for “increasing all the control and inspection mechanisms, especially sanitary, taking into account the capital’s urgent need to sustain its economy and guarantee the start of the school year in September,” according to Tribuna.

With the 24 new cases reported this Thursday―more than half of the 49 registered on the island―Havana has already totaled 1,536 positive cases since the arrival of the coronavirus in Cuba. In addition, after having significantly reduced its active cases weeks ago, they have already reached 125, while the incidence rate per 100,000 inhabitants is 71.9, and seven local transmission events are open in the city―five in communities and two in institutions―and 26 outbreak controls, in the municipalities of Habana del Este, Centro Habana, Marianao and La Lisa.