Cuban medicinal mud on the market 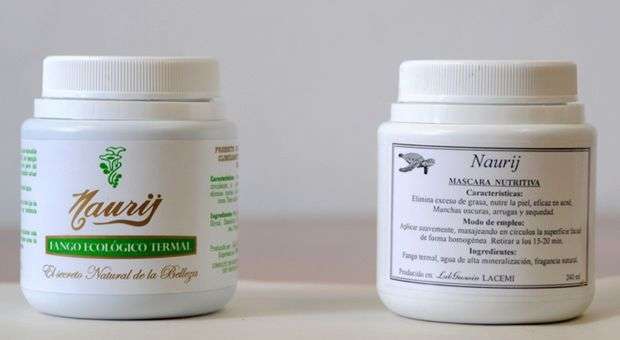 It is not the Holy Grail for the cure of pain; it doesn’t remove juvenile acne in one shot, or turn a frog into a prince, but is effective for several conditions that people may have. This is how this thermal ecological mud is presented, which comes to the market with the name Naurij.

“The person using Naurij will get improvements in his quality of life, because it is a product with a near neutral pH that brings different properties. Besides helping to heal some diseases, removes blemishes, nourishes the skin, fights teenage acne, and reduces suffering in the knees and back, such as rheumatism and arthritis. It is not a painful treatment, or aggressive and also has no odor. Each product comes with application instructions, but we recommend going first to see a doctor “, Natalia Sánchez Vega, BA in Physics and Director of the Geomineros Laboratories (LABGEOMIN) Business Unit Base, the governing authority of the José Isaac del Corral Central Laboratory of Minerals (LACEMI), responsible for manufacturing the mud, explained.

“Another advantage is that it acts as a dermal stimulant, not only cleaning the skin, but favors the elimination of uric acid, helps in cell regeneration, it chemically has minerals and elements needed by the body, stimulates blood circulation, exerts as restorative of tissue, produces organic hyperactivation and actively intervenes in the skins with very dilated pores, effectively controlling sebum secretion, ” Vega Sanchez says

According to data provided by LACEMI, the thermal ecological mud Naurij should be applied to clean skin twice a week, not every day to allow time for the effects to occur. The layer will be in correspondence with the skin and lesion size, and it will be removed with warm water only if you have oily skin and normal temperature water while if the skin is dry.  People who have joint problems should apply the mud for 30 minutes.

Where to find it?

The thermal organic mud is marketed throughout the health system in Havana to rehabilitation centers and Industrial Craft Market (AIM). “They signed a contract with our company and purchase the product. We give you the assurance that this is a stable mud, preserved and characterized with the set parameters. It is sold also in agricultural stores. We supply the product to the agricultural sector because their workers are exposed too long to the sun, and they apply it to the skin to protect them “, she said.

The product is also sold in international pharmacies in some airports and hotel spas throughout the country. In the words of Vega Sánchez none of the products offered in local currency exceeds 12.00 CUP, while in hard currency the price is in the neighborhood of 7.00 CUC.

In terms of marketing it abroad Sanchez Vega reports that in the past they exported it to Spain, the Dominican Republic and Bolivia. “Since 2010 we distributed it stably in Venezuela. Right now we perform routinely procedures that the mud is sold again in the DR. Sales, so far, report to the company earnings of over one million dollars in the domestic market, and more than half a million dollars in other countries. “

“We need to improve the conditions of production, because the process we undertake is very traditional. It happens that this laboratory is for scientific and technical services related to geology first, most enterprise resources are dedicated to these purposes, not to the work we do,” Vega Sanchez says.

Later, she notes that with exports to Venezuela, lately, they have a little more money to change the image of the product. “In the country this is the only laboratory that produces medicinal mud. In the 80’s there was a boom related to its production. However, with the arrival of the Special Period we were the only ones producing it in earnest. “

The laboratory work is not free of situations that can cause the disappearance of some product. Since 2006 they don’t produce the mud soap, because there is not a plant for its production.

“It was the star product. Its creation began when the Special Period was at full swing. To make the first soaps we took the washing ones, ground them and test them to see proportions and thus we made the first mud soaps. Over time we got better, but now we don’t have the conditions to get the product to the market, “the director says.

These problems are compounded by the instability in finding transportation for raw materials, lack of promotion through the media in recent years, the delay in delivery by the office operating sludge permits, belonging to the company responsible for managing the saltworks and the loss of seven of the 14 products they once had.

The key is in the saltworks

At present ecological thermal mud is extracted from the Bidos, The Real and April 10 saltworks, using the analytical techniques used worldwide for this type of ore, as is the case of the A-ray diffraction, thermal analysis, chemical analysis and microbiology.
“It is a natural produce that comes as a result of a geological process of sedimentation of organic matter, clays, flora and fauna of the place, soaked for hundreds of years to decompose to become mud. It has therapeutic properties, both for clinic and beauty uses. It’s a living being because in it inhabits different chemical elements and micro-algae, which contribute to the type of properties that the mud presents, “says Vega Sanchez.

This researcher reported that microalgae synthesize fluids, protein, aluminum and sackcloth “that makes the product to have nutrients and restorative properties. The clay in the mud has elements of ion exchange. This type of clay helps remove some toxins from the body. “

When the product reaches LACEMI, they make a microbiological analysis on the sludge for the presence of some pathogen component. This measure is taken because sometimes it rains and the salt gets contaminated. “What we do is nuance below 0.5 mm, then you get creamy dough and we add it a preservative. When getting the mud we run different laboratory tests. “

Alongside LACEMI, Geominera Business Group SA and the National Center for Scientific Research (CNIC participate in physical-chemical characterization of the mud).

After passing the relevant tests, a sample of sludge is sent to the Institute of Nutrition and Food Hygiene (INHA) for microbiological and toxicological studies. The institute belongs to the structure of the Ministry of Public Health, and is responsible for certifying any product sold in Cuba, whether imported or not, as long as they are not drugs.

Vega Sanchez says her company works in conjunction with hospitals Julito Diaz, Surgical Clinic of Havana and Santiago de Cuba, the Faculty of Medical Sciences of Camaguey, military hospitals Carlos J. Finlay and Luis Diaz Soto and the Institute of Occupational Medicine, which are responsible for assessing the therapeutic properties of the mud.

Before marketing, experimental studies were performed in people with different conditions, from which we evaluated the efficacy and safety of thermal ecological mud, Vega Sanchez points out. “Specialists in medicine and natural products considered the treatment after use could be beneficial for the patient since the results obtained prior in clinical study indicated so.”

The investigations were carried out in various institutions within and outside the country, such as The Clinic of Plastic Surgery, Natural Bioenergetics in the Luis de la Puente Uceda Hospital, by Dr. Angela Gandaria; Calixto Garcia hospital by Dr. Monica Alvarez, in the Department of hospital Medicine Joaquin Albarran, by Dr. Enrique Garbayo Otaño and the Bioerber Bioetec Clinic in the Dominican Republic, by doctors Jaime Rodriguez and Magnolia Suazo.

The LABGEOMIN director said that product made from mud and mother water extracted from the saltworks is the origin of the thermal ecological mud, nourishing mask, anti-cellulite mud, among other items. The mother water is rich in magnesium sulfate and is used in facial toner, sunscreen, aftershave lotion, drying lotion and revitalizers.

Vega Sanchez specifies that the exploitation of mud and mother water has nothing to do with salt production in the country, because they are subproducts of where this mineral is extracted. Furthermore, the resulting product in quality and presentation competes with any dermo-cosmetic product sold internationally.

A muddy story from before our time

The use of medicinal mineral sludge of different genesis for beauty treatments, both for musculoskeletal conditions and skin’s, dates back to ancient times. Great cultures like Greek and Egyptian used it with positive results. Hippocrates, a Greek physician, worked with it to relieve abdominal pain and reduce inflammation of rheumatoid and osteoarthritis. The Egyptians manipulated it to treat inflammations, ulcers, rheumatic deformations. Embalmers, using the antiseptic properties of the mud, used it to mummify corpses.

The use of sludge was initially “in situ”, but from the twentieth century they began to emerge as products for spa treatments, clinics and beauty salons. Thus began the marketing of them by prestigious firms worldwide.

In Cuba its use dates back to the times of slavery and blacks were brought from Africa who applied it to remove skin conditions, bruises and muscle fatigue, which suggests its use, first, in the black continent. In all cases, the application was empirically and its uses were transmitted from generation to generation. As in other countries, in the twentieth century on the island are spas where sludges were used instead, such as Elguea, Santa Maria del Rosario, Ciego Montero, among others.

In our archipelago there is a large number and variety of deposits of mineral waters and peloids (sediments with therapeutic use) with therapeutic and pharmacologic properties, under the specific conditions of each physical-geographical ecosystem, microorganisms and tropical climate of the country.

In that environment originate elements, substances, nutrients and biochemical products for therapeutic action beneficial to the healing of certain diseases and illnesses. Hence lays the importance of a correct exploitation of the product for people to have an alternative in easing their sufferings.