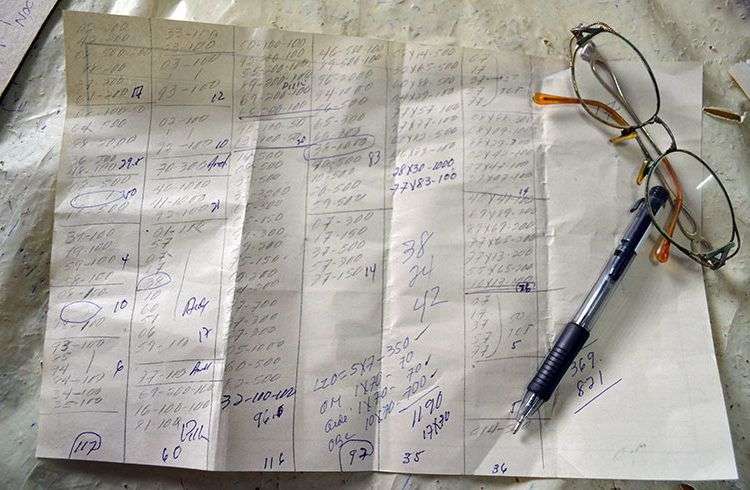 “Everyone plays the lotto in Cuba. It doesn’t matter that it is illegal and you can go to jail for up to four years. Here, everybody has bet at least one peso to a number, “says Ricardo, 57, with that spark in his eyes vices leave behind.

Before, he used to gamble more, when there was no food and the Kabbalah helped him look after himself. If there were doves, he betted on the 24. For the day of San Lazaro, 17 and 77, which is “crutches”. For the 13th, birthday of Fidel, the number of years he were and 1, because it is ‘horse’.

Ricardo learned the meaning of the digits first, and then he learned to read. The tradition came from the family. His paternal grandfather was selling tickets before the Revolution, when the results were broadcast on Radio Progreso at two in the afternoon. The same time his fellow countryman Martin Fox became the best banker in the region of Ciego de Avila and became the owner of the Tropicana nightclub in Havana.

But in the nineties he gambled due to “hunger.” And the rollercoaster of his instincts led him to bankruptcy several times. “At a time I was collecting bets. I used to hide the lists in my daughter´s diapers and took them here and there. But that was the most dangerous part and I quitted. ”

Now he only plays a number, the same that 30 years ago took him out of difficult times. One peso to the t 31 ‘shoe’, every day, religiously, in the City of Porches.

In one of these porches, old Alberto sits every evening to drink rum on a seedy bar. He brings paper, pencil and patience. Everyone knows he is a ¨lister¨ but he quietly looks around while talking.

“There was always a lotto ¨on the side¨, even if it was legal, because some were “banking “in their homes. After they banned the national lottery, it was supplanted by those of Tachira and Zulia in Venezuela. But when Chavez won, stations Radio Rumbo and Ecos del Torbe were no longer available. Then they began to be guided by the lottery of Miami from 2000, which comes every day through Radio Martí and a station called La Poderosa, from the United States.”

Alberto also bets, but not guided by fate. He has an empirical statistical system that rarely fails. His list averages 250 Cuban pesos a day and he keeps 20 percent of what he collects. When his “people” win, they usually give him a small gift. He is careful on having his list in order before handing the money to the “head of the bank,” the man who hoards the “play” of a neighborhood and takes it to the banker.

But a banker who is respected has at least three “heads of bank” that collect at least six lists. That is the case with Pancho, who has been a banker for over 20 years in a central area of ​​the city.

“Here we play for the Ca $ h3 and Play4 of Miami twice a day. The results are now immediately known thanks to the satellite dishes and you can see it on Channel 4 at eight in the evening. The one at noon almost always is seen online. ”

Prizes vary from province to province. In Ciego de Avila, for example, a peso may be paid for the ¨fixed¨ number at 70 pesos, while in Havana can be 80. Other modalities are consecutive numbers, hundreds, and the famous parleys that pay 700 pesos for every one you bet. “But if a banker dares to change those numbers, we sent a group of friends to remind him how the business works,” Pancho said referring to the mafia rules surrounding the gambling world.

What about the police? Cubans after all, they have in their blood the desire to tempt fate with numbers. Like that client of Pancho that won a very difficult triple parley. It was a blow of thousands of pesos for the bank and to celebrate he bought a whole pig, roasted it and choked on a piece of meat.

“But people no longer go to jail for that. If they did, it would be best leaving inside those who don’t gamble, because many millions of Cubans wouldn’t fit in a prison. ”

And aren’t they afraid to fail, end up with nothing?, I wonder while five men wait for Pancho to “square” the play of the afternoon.

“The first is that I do not gamble. The smart ones squeeze the business, but don’t get hooked by the vice. If someone takes a jackpot I do not care, because we eventually recover. Also, in this game there is a saying that is a law and so far has not failed me: “From January to January, the banker always wins.” Always. ”

* The names of interviewees have been changed to protect their identity.