For a revolutionary kiss 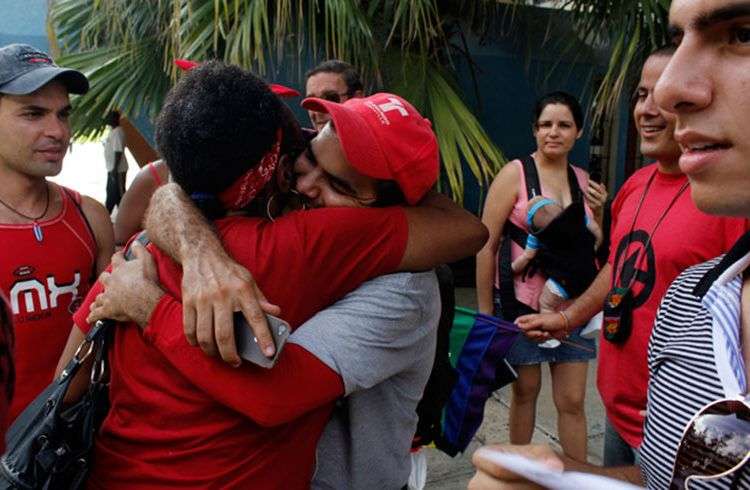 Next Saturday 28 is the 45thanniversary of the Stonewall Inn riots in New York City.

The Arcoiris (Rainbow) Project, which works for the rights of LGTBI people, has arranged a Second Kissing for Diversity and Equality, in Havana’s Old Square, at 4:00 pm.

In 2012,Arcoiris organized a similar activity in the nearby area of Havana’s Bus Station. We took this opportunity to interview Yasmin Silvia Portales Machado, manager and activist of the project, on the main purpose of this event.

What activities has Arcoiris arranged on the occasion of June 28?

This activity is not too expensive and can include large numbers of people, we have invited the LGBTI community and heterosexual allies that wish to celebrate the pleasure and right of love.

At the same time, it is a political taunt because in Cuba public spaces are still for heterosexual people. Taking the streets, standardizing everyone’s right to act openly on broad day light, constitutes a serious political challengein our country.

The call launched notes on the political nature of the activity and its articulation with the steps taken by different social actors for building a national culture that recognizes and celebrates the diversity of its citizens.

In a context which highlights that the Labor Code didn’t include gender identity among the reasons of discrimination, and with the antecedent of the 6th Regional Conference by the international Association of Gays, Lesbians, Trans and Intersexuals in Latin America and the Caribbean (ILGA-LAC), do you consider this is the right moment for moving from “romantic actions” to “political activism”?

This may seem romantic; however, for Cuba’s political and legal structure this is very serious. There is nothing romantic about challenging the policy of the State on the civil rights of LGBTI people and their autonomy.

The National Sexual Education Center (CENESEX by its acronym in Spanish) –institution in charge of LGBTI issues– champions the thesis of “accompanying” LGBTI people. Though this has been carried out with the best of intentions, it has translated into divided groups (biological men, biological women, and transsexual people) that lack political autonomy and capacity of dialogue among them or with other social services. Arcoiris challenges this idea as it has been constituted without institutional support and has created a program only comprising the opinion of its members.

This project –born in 2011– has always defended the principle that discrimination towards LGBTI people is a political issue: it is a deficiency in our legislation and our culture regarding citizens’ rights in Cuba. It has to do with gender discrimination and it shows poverty; legal deprivation; family, public and institutional violence.

It is a political challenge to have an electronic bulletin without an authorization by the National Registration Office for Periodical Publications, to break the information monopoly by the State media, which takes community publications as a threat for national union. It is a political challenge to criticize the actions by the CENESEX or the Cuban government, to demand public explanations from them for their silent decisions in terms of domestic policy –the 2012 Population Census, delays in the Family Code– or foreign policy– the 6th Conference by ILGA-LAC.

Arcoiris has criticized the kidnapping of the parliamentary will in the 116 Law of the Labor Code, given that its final draft did not include gender identity and HIV status as punishable causes of discrimination as to employment. Paquito el de Cuba –member of Arcoiris– was the first one to denounce it. His denunciation was published in the social networks and spread through email. Mariela Castro’s subsequent declaration –it was a huge event that a Deputy moved away from the official stand– acknowledges this work and the usefulness of a critic civil society in front of the State.

Did the Conference promote further articulations with community groups from CENESEX or other related organizations of the civil society?

There are no work relations with CENESEX. Even though we maintain best relations with its activists and officials, even with Mariela Castro, it doesn’t translate into cooperation in terms of activism. In 2013, we attempted to establish an agreement on Gay Games but the red tape of the institution –which is characteristic of it–, suffocated us.

As to community groups of CENESEX, I foresee a difficult cooperation given their lack of political and material autonomy. They are focused on a vindication speech and their –known– claims do not reflect a comprehensive approach on Cuba’s social structure as an oppressive space for diversity.

Arcoiris is of the opinion that nor homophobia or chauvinism are just part of the “culture” or the legacy of the past. For us, discrimination is an ideological artifact, an organic part of the socio-economic weave of the classes’ society“anti-capitalist and independent”. Fighting structural discrimination is to fight inequality and exploitation –because in order to make their rights effective it is necessary to cover basic survival needs.

Prior to the Conference we had some exchanges with the National Center for the Prevention of HIV-AIDS on a few collaboration topics. Now, we are analyzing the material they provided us –to see what we can do. Yet, just by opening a dialogue between equals this Center is recognizing our work. We are thankful for that.