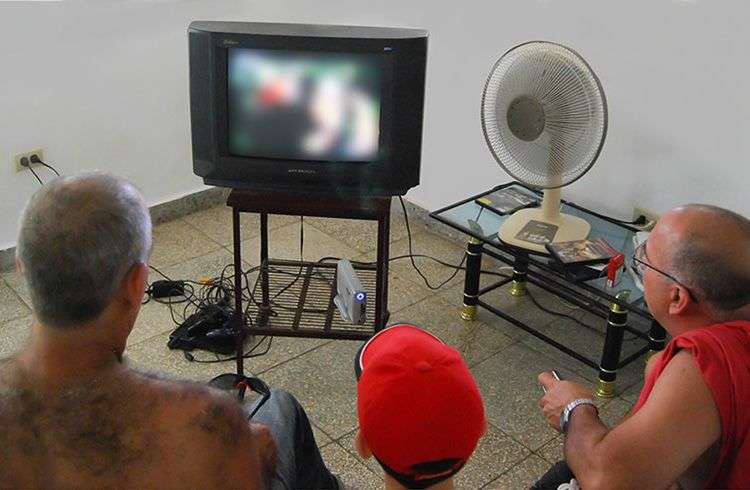 Last week on the island began a campaign to lower Internet prices and immediately Marti Radio and TV, U.S. government media that broadcast propaganda toward Cuba- announced that they would use networks to send their message.

They say that the ends touch and feedback each other. The news must have made very glad those that within the island are seeking arguments to halt the opening of the Internet. Now they can refuse it appealing self-defense.

Martí Radio and TV say more than 3 million people see their programs within the island, without blushing they still claim that 1 in 4 Cubans follow them. Their calculations resemble those of Vivir del Cuento, I mean the most popular national comedy program.

I must have really bad luck because I know no one who sees TV Marti. Even those who have confessed to me that they are consumers of other publications of anti-Castro exiles, say they have never had access to the television programs.

Even a member of the opposition, Amador Blanco, in the province of Las Villas, told the newspaper El Nuevo Herald of Miami that “we have never seen the Martí TV. If someone tells you that is it is false. Radio Martí’s audience is also minimal. ”

In Cuba the weekly “package” of television programs distributed by individuals, has the largest audience.

What people really expect in Cuba each week is the new edition of the “package”, a collection of movies, series, documentaries and websites that is made from materials downloaded from internet or satellite TV antennas.

The package is an initiative of the self-employed; the materials are downloaded illegally in places where there have good bandwidth and also in copying the U.S. television programming to be broadcast by local stations.

They sell the “packeteers” and these make a material in which they include homemade video clips of national musicians and advertising of private businesses that are emerging in Cuba. Later they resell it to hundreds of thousands of Cuban families for 1 or 2 dollars.

The phenomenon is so powerful that the government is studying the possibility of developing an “official” version, checking the contents. While internal dissent newspaper, 14 and ½, tries to sneak into “packages” to get information dissemination.

But it will be difficult for any ” packeteers ” to accept the inclusion of the opposition media in its issue because everyone knows that mixing business with Cuba dissidents is not profitable, especially when the source of their inputs is of questionable legality.

Politicians from both sides struggle to understand and accept the success of the “package”. One reason could be that is not designed following ideological patterns but taking into account the tastes and needs of the people.

It is a paradox that a single “packeteer” with an investment of a couple of thousand dollars has more dissemination than Martí Radio and TV, where hundreds of employees work and receive from the U.S. government an annual budget of 26.3 million dollars.

To justify such expenditure they need to make up the small viewing figures, while desperately looking for other ways to increase their influence, taking advantage of any opening there in Cuba, be it mobile phones, Internet or social networks.

Meanwhile, on the island a campaign already started against those who independently develop Internet activities. There are even TV programs showing the capture of a network of “dangerous” computer who committed the crime of self-employment.

Thus, the radicalism of some nourishes the other´s. And among them, a nation they don’t let move as fast as it could. As the editor of Cubadebate, Rosa Miriam Elizalde, said: “in a world that is at high speed, we cannot continue going in horse-drawn carts”.

Thus, the radicalism of some nourishes the other´s. And among them, a nation they don’t let move as fast as it could

For a revolutionary kiss