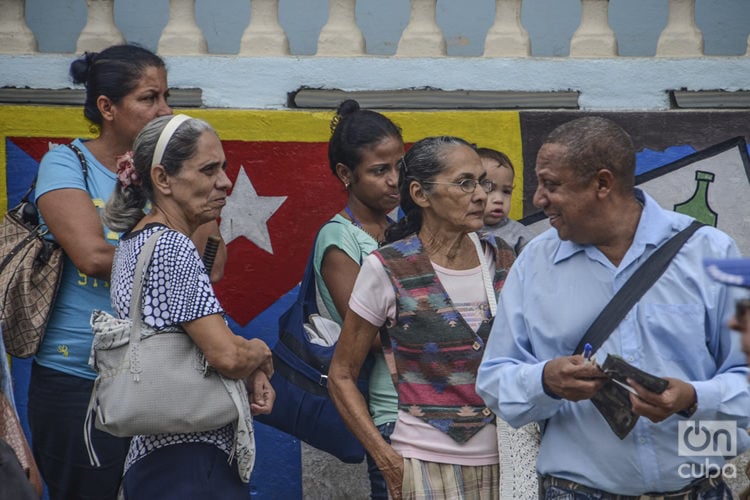 The draft that will serve as the foundation for the approval of a new Cuban Constitution reaffirms the socialist character of the political, economic and social system in the country and the “governing role” of the Communist Party of Cuba “as the higher leading force of society and the State.” This is how it was announced in a summary of the document published in Granma in which it is affirmed that the draft has a Preamble and 224 articles, divided into 11 titles, 24 chapters and 16 sections.

The most significant announcements include the one on the creation of the figure of the President, which although he/she will continue being elected by the National Assembly and not by direct vote, means a great novelty in Cuba. It proposes to put a five-year ceiling on his/her term in office and only two consecutive terms, not being able to be reelected to the same post again. For the first time in decades the Cuban head of State will have a limited time to govern.

A committee headed by Raúl Castro is in charge of proposing to the country a Draft that will be discussed and taken to a referendum for its approval. The current 1976 Constitution, partially reformed on two previous occasions, is behind the times in several aspects in relation to the problems of current Cuban society and is today an obstacle for some of the transformations that the Cuban government aims to carry out.

The Draft is still not known in its totality but this is the first time that some of the proposals it contains are published and that will serve as the foundation to encourage the social debate about it.

Definition of the Cuban State

In the document the Cuban State is defined as “socialist of law, democratic, independent and sovereign, organized with all and for the good of all, as a unitary and indivisible republic, based on its citizens’ work, dignity and ethics, having as essential objectives the enjoyment of political freedom, equity, justice and social equality, solidarity, humanism, welfare and individual and collective prosperity.”

With respect to the current Constitution, several novelties have been included, like the description of the State “of law” and “democratic.” Also added as one of its essential objectives is the enjoyment of “social equality,” “solidarity,” “humanism” and to the notion of welfare, individual and collective “prosperity” is added.

ARTICLE 1.- Cuba is a socialist State of workers, independent and sovereign, organized with all and for the good of all, as a united, democratic republic, for the enjoyment of political freedom, social justice, individual and collective welfare, and human solidarity.

The newspaper’s text mentions that the obligation of the State bodies, their executives, officials and employees is defined, to “respect and attend to the people, maintain close links with them and submit themselves to their control.” With respect to the current Magna Carta these three aspects are a novelty and place more emphasis on the aspect of public service.

ARTICLE 10.- All the organs of the State, their directors, functionaries and employees, operate within the limits of their respective authority, and are obliged to strictly observe socialist legality, and to ensure respect for it in the life of the entire society.

With respect to the issues of the Cuban State’s foreign policy the draft updates some terms taking into account the current context – different from 1976, when the current Constitution was approved: at the time Cuba maintained strong alliances with the bloc of Eastern European socialist countries and the USSR, there existed a bipolar world marked by the “cold war” and the anti-colonialist causes in the so-called Third World were in full development.

Some of the novelties that this new constitutional proposal would bring would be that of recognizing the multipolarity between States, condemning terrorism, rejecting the proliferation and use of nuclear weapons. Also mentioned, as an issue of foreign policy, is the protection and conservation of the environment and the struggle against climate change, as well as defending the democratization of cyberspace and the condemnation of “its use for subversive and destabilizing purposes against sovereign nations.”

ARTICLE 12.- The Republic of Cuba adopts anti-imperialist and internationalist principles, and

What was published in Granma does not mention if the new constitutional text will continue including the principle that the Cuban economic system is based – as Article 14 of the current Constitution says – on “the suppression of exploitation of man by man” and that as principle of distribution the maxim of that “from each according to his ability [be demanded], to each according to his work [be paid].”

The Draft would maintain as an essential principle in economic matters “the socialist ownership of all the people over the fundamental means of production and planning as a principal component of management.”

It also recognizes “the role of the market and of new forms of ownership, among them the private.”

The state-run enterprise is defined as “principal subject of the national economy and its autonomy is recognized as an essential principle of functioning.”

The importance of foreign investment for the country’s economic development, with the due guarantees, is ratified.

In terms of ownership of the land, limitations are maintained for its transfer and “the State’s preferential right to its acquirement through its just price.”

The new Constitution would attract an interpretation of citizenry as “effective citizenry,” a term used in contemporary political sociology to consider the levels and types of citizen exercise and that some authors refer to as an ideal form of “responsible citizenry.” In the proposed text the effective citizenry would be understood as “Cuban citizens, in national territory, are governed by that condition and cannot use a foreign citizenship.”

In terms of justice and due process, “the presumption of innocence; the social reinsertion of persons deprived of freedom; being treated with respect to dignity and psychological, physical and moral integrity, as well as being processed and sentenced by a competent, independent, impartial and legally pre-established court” are recognized as principles

The right to freedom of religion is maintained.

A substantial mention – considering that in a few years 30 percent of the Cuban population will be older over 60 years – is the establishment of the obligation of the State, society and families to protect and assist older adults and handicapped persons for their rehabilitation and improvement of quality of life.

The notion of equality is expanded by incorporating the non-discrimination because of gender identity, ethnic origin and handicap. A demand by groups like the LGTBI, or groups and activists who have been denouncing the prevalence of racist attitudes and actions in several scenarios of Cuban social life.

Nothing is mentioned in the glossed draft about the possibility of legal recognition of homosexual couples (same-sex marriage), or for adoption and assisted reproduction.

For the first time since 1976 Cuba will again have the figure of President and Vice President of the Republic, according to the proposal.

The President will be the head of State, but will continue being elected by the National Assembly of People’s Power to govern for five years with the possibility of two consecutive terms without later being able to again exercise that post.

The draft proposed to raise as state organs of constitutional rank the General Comptroller’s Office of the Republic and to create a National Electoral Council dedicated to the electoral processes in the country.

In the municipal level of People’s Power, the term in office of the delegates will be extended to five years together with the recognition of municipal autonomy. The possibility of convening popular consultations on matters of interest for the locality is included, and “the right of the population to propose the analysis of issues in the assemblies and the correct attention to citizens’ requests, presentations, complaints and denunciations” is added.

Neither are the functions of the deputies to the National Assembly, the possibility of reducing its composition and professionalizing the elected deputies dealt with, aspects about which there have been previous speculations in opinion spaces.

The draft will collect, as has been previously affirmed, “clauses on the intangibility concerning the irrevocability of socialism and the economic, social and political system, as well as the prohibition of negotiating under attack, threat or coercion from a foreign power.”