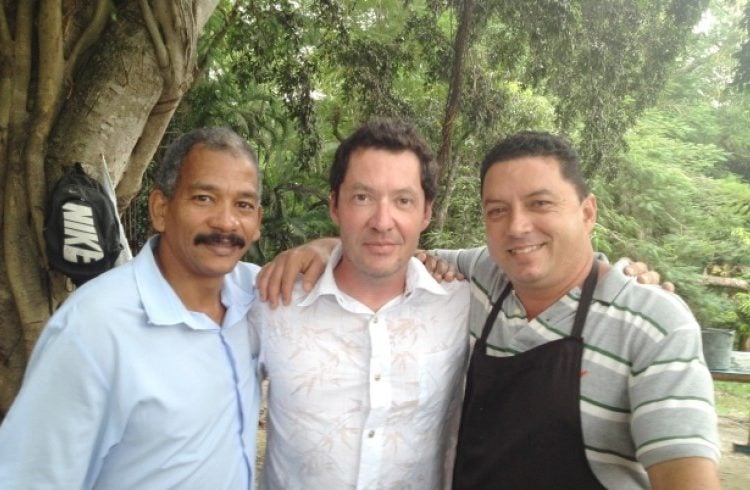 Patrick Hemingway, center, during a previous trip to Cuba, along one of the guardians of the Hemingway Museum, Roberto (left) and Thomas Fuentes (right), grandson of Gregorio Fuentes, Hemingway´s officer on his boat Pilar / Photo: Taken from the Vancouver Sun

John and Patrick Hemingway, grandsons of American novelist Ernest Hemingway (1899-1961), are in Cuba to celebrate the 60th anniversary of the granting of the Nobel Prize in Literature to their grandfather, and 80 of the purchase of his yacht El Pilar, reports the Cuban News Agency.

Since Sunday they left the United States accompanied by marine biologists and experts in sport fishing, with whom they will be on the island until September 13 also promoting cooperation programs on natural resources in the Straits of Florida, confirmed the website of Latin America Working Group Education Fund (LAWGEF) entity that along with the Pugwash Conferences on Science and World Affairs and the Global Arts / Media, organized the visit.

“In 1934, Ernest Hemingway invited representatives from the Philadelphia’s National Academy of Sciences to travel on his beloved boat, the Pilar, to conduct marlin research in the Florida Straits. At that time there was no embargo on Cuba, and this type of scientific exchange could happen frequently. After 50 years of broken diplomatic relations and in a world with natural resources becoming more scarce now is the time to promote scientific exchange with our geographical neighbors rather than isolate them”, they explained.

However, John, along Robert McCracken Peck, professor at the natural Sciences Academy of the Drexel University published in the Philadelphia Inquirer the reasons for his trip:

“Today, in the waters off Cojimar, and along the South Florida coast, the marlin, tuna, and other game fish that Hemingway so loved and that helped to inspire his literary contributions are under severe pressure from overfishing, water pollution, and other environmental threats. Gathering – and sharing – baseline information about these species and their migratory behavior will be an essential first step in enabling both countries to better understand and protect these vulnerable ocean resources that are so important to our tourism and fishing economies. “(…)Today, 80 years after his collaboration with the academy, it is time to revisit this important aspect of the Hemingway legacy. We hope that in so doing we can help improve ties between Cuba and the United States for the benefit of both of our peoples and the natural resources on which we both depend”, John wrote

And Patrick told the Vancouver Sun in a short interview the ways they will mark his grandfather´s anniversaries: “My older brother John and I both have 10 minutes to give a speech. I’m going to talk about my grandfather and father and their relationship with the Cuban people, and share some personal stories about my time in Cuba. I’ll probably share some of the stories I heard about my grandfather growing up”..

The Hemingway grandchildren are staying at the Hotel Ambos Mundos, where his grandfather lived in the 30s of last century, and dined at La Bodeguita del Medio, the writer´s favorite restaurant.

Their program, circulated on some websites includes today sailing aboard a fleet of boats from the Hemingway International Yacht Club to Cojimar, coastal town immortalized in “The Old Man and the Sea” and where the restaurant-bar La Terraza de Cojimar is and where even today favorite dishes and cocktails by the novelist are prepared.

There they will hold the small ceremony marking the 80th anniversary of the first voyage of El Pilar, in the boat, which was donated to Cuba and is in the Museum of Finca Vigia, that the sailed in from Key West to Havana in 1934, NOTIMEX reported.

On Tuesday they will have a meeting in the Office of the Historian of Havana and a tour of the old part of the city and a visit to the UNEAC (Union of Writers and Artists of Cuba) and an interview with writer Leonardo Padura.

On Wednesday, they will talk on relations between the United States and Cuba, and travel to the Marina Hemingway for the anniversary Yacht Club founded in 1992 then they will be in the Center for Marine Research at the University of Havana.

On Thursday, they will visit the National Aquarium in which they will hold discussions on cooperation between the United States and the island nation in marine science education and will go to Finca Vigia in San Francisco de Paula, a site that was home to their grandfather here.

It was discussed in social networks that for the anniversary ceremony, to award of the Nobel to Hemingway, the medal which he deposited in the sanctuary of the Virgin of Charity of El Cobre in Santiago de Cuba will be brought to Havana.

One day before leaving on Friday, they will pass through San Alejandro academy of fine arts, and Alejandro García Caturla, of music.

Ernest Miller Hemingway touched Cuban soil for the first time, a few months before the age of 28. He was just passing through, but then he would make about 12 trips to the largest of the Antilles, a country where he would spend the most productive years of his career and where he got the Pulitzer Prize (1953) and the Nobel Prize for Literature (1954) obtained for the work of life but mainly by the old Man and the sea.

“I always had luck writing in Cuba,” he said once.

A cup of coffee at Portocarrero´s house