A cup of coffee at Portocarrero´s house 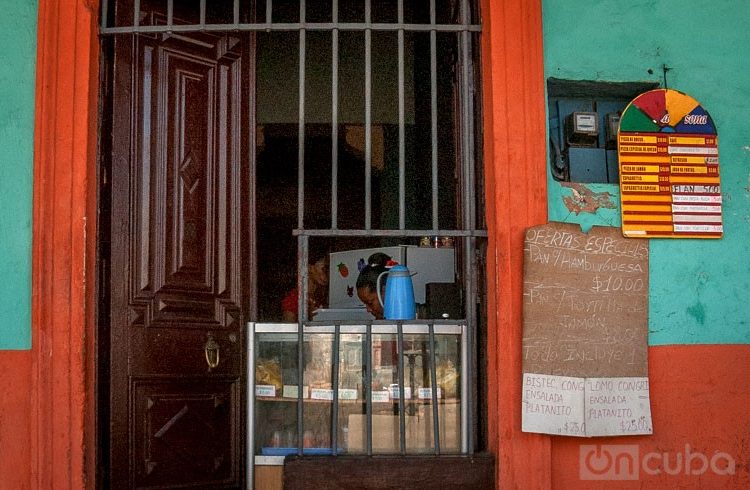 “Did you want something?” the girl asked me, in a tone that really means “What are you looking at?”. “A coffee,” I say to justify my presence. She pours me an amber liquid, sweet, and puts the glass on the counter. Calzada del Cerro number 1301between Consejero Arango and Carvajal. It is a small time cafe, but in this house the painter René Portocarrero was born 102 years ago.

Beside the door a brass plate identifies the location; the second last name is missing a letter. Sure, everyone pays more attention to the board, announcing pizzas, spaghetti, bread and omelet, bread and jam, ground peanuts, meringues, juices, soda, fried pork skins… After all, a cafe is a cafe.

This neighborhood, once bourgeois and refined, inspired the Interior del Cerro series (1943-1944), “one of our artistic plots where the Cuban naturally reaches its universality” as José Lezama Lima, the poet wrote, in 1966:

“Many of the palaces of that neighborhood have been destroyed or their system altered, or just kept the spell of one of its fragments. Portocarrero was able to rebuild it in his existence, supported by his childhood memories. The walls, the doors, the ornate furniture, are made in his reality to set innumerable details of the art of living. Our artist has reconstructed the neighborhood, in a way that is as the way for future cathedrals. ”

“But I do not know about that,” the owner tells me when I try to start an interview. She has lived here for 5 years and shortly after arriving she set la Primera, the business-that’s the name. “And those who lived before?”. “They’re gone.” “From the country?”. “Yes.” She sends me to see the old man next door; it is the same house that is divided. “As almost every house of the Calzada”, says Carlos Bartolomé, Cerro historian. But the old man is not there.

The National Museum of Fine Arts holds in its stores three Interior del Cerro, and there is another collection of Ramón Cernuda, in Miami. Perhaps there are about 8 or 10 in total, with no news on the fate of the other pieces. A picture of Portocarrero can cost $ 15,000 on E-bay. Maybe there they know.

Bartolomé believes that, beyond the general architectural value of the street and the birth of the artist himself, this property has no equity interest, for it remained a house after the family moved to the Prado in 1916 “No relevant personality or special lived there, or nothing happened.”So the number 1301 occupies a space in the inventory of local sights, and that’s enough.

“The recreation of that space was always as something mythical to him,” says Roberto Cobas, curator of the NMFA. Adelaida de Juan valued these works as turning point in the aesthetic evolution of Portocarrero:

“First are the interiors del Cerro, in which ornament of architecture and furniture linked and cover the entire composition, including the human figure. Then in the fifties, it’s the entire city and not just a neighborhood; but it is a city that has lost weight and tuned into almost architectural plan. Its color is delicate and sad, and its schematism, a mere suggestion of a depersonalized city.

“In the sixties resurfaces the initial exuberance of line and color, but no longer tied to the Cerro but a full color display, great synthesis of buildings, streets, statues, and above all, the very atmosphere of a city rediscovered by the painter.”

The Interiores represent perfect samples of that baroque style that some applauded in him and others accused him of. “If it really was visible evidence in Cuba of the baroque feeling of existence, my men and women would be baroque. If it concludes that there is in Cuba baroque soul that governs everything, I too would be a Baroque man. And if as Ramón Gómez de la Serna said that the Baroque is ‘always a longing’ we would be living undoubtedly an entirely baroque world. My painting, I want it to be painting entirely. ”

So could the house become a museum, a gallery? If the artwork go back to art, if the cycle is closed? “I should go first and see what that is, suggests Cobas. For me it was frustrating that the effort will not materialize to rescue Wifredo Lam’s house, because there he painted The Jungle, The Chair, The Green Morning, today they are not only classical in his work, but universal. The people who were working on that project is not seeking a penny, it was purely to make a significant cultural work. And it was a failure; there was no support from many people. ”

In 1983 or 1984, the Museo del Cerro organized a tribute to the “master of color”. From that day a tiny Flora was left, drawn in ink on a piece of paper to give it away as a thank you to one of the specialists. They still preserved it, though no one knows if it is in the Documents section or Art. “The problem is that the museum has been 30 years in repair, just imagine …”.

The coffee is terrible, amber, and sweet. There is no remedy. Several institutions would have to intervene, agree, devise a viable and coherent initiative, offer a new decent home to current residents; convince them before they exchange, they would be heroes of Cuban culture, which would make a huge well, they would receive great recognition and would come on TV.

It would have been perfect to write something like “History of the painter as told by his house.” But this house lost its memory and is now a monument to kitsch neighborhood. They say Portocarrero was a joker. He’d died of laughter if someone told him.