On March 12, 1960, Cuban scout Tony Pacheco, of the Cincinnati Reds, closed an agreement with a young player who played at a sugar mill on the island. 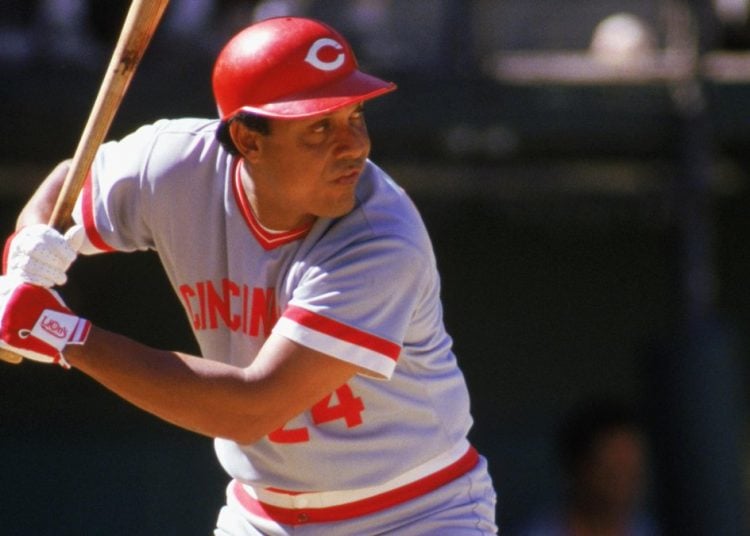 When you review the history of the Cincinnati Reds, there are unforgettable dates. Of course, the main references are marked in October, with the five World Series crowns that the franchise achieved in 1919, 1940, 1975, 1976 and 1990, but there are other great dates that the Ohio State Reds celebrate in style.

Its founding in 1866, the first Major League night game at Crosley Field (May 24, 1935), or Johnny Vander Meer’s two consecutive no-hitters in June 1938 (a feat no one else has ever repeated), are all part of the sacred records of the Reds, one of the five franchises that played in the 19th century and are still active.

But there’s more. In 1960, thanks to the intuition of scout Buddy Bloebaum, they signed an 18-year-old named Pete Rose, who would later become the mortal with the most hits in Major League history. In June 1965 they selected Johnny Bench in the second round of the first organized draft in baseball, and in November 1971 they obtained Joe Morgan through a trade. Bench and Morgan won six National League Most Valuable Player (MVP) between 1970 and 1976.

We could add other key dates, but we are interested in one in particular. On March 12, 1960, 61 years ago, the Cincinnati Reds signed a young Cuban from the Violeta sugar mill town, in the island’s eastern region, who would become one of the cornerstones of the franchise, one of their distinctive faces for over a decade.

We’re talking about Atanasio “Tany” Pérez Rigal (Camagüey, 1942), one of the four Cuban members of the Cooperstown Hall of Fame along with Cristóbal Torriente, José de la Caridad Méndez and Martín Dihigo. Tany was a 17-year-old boy when scout Tony Pacheco, also a Cuban, saw him playing in his hometown and made him an offer.

Pacheco, a native of Punta Brava, had been the manager of the Havana Sugar Kings between 1958 and 1959, and later became one of the scouts for Cincinnati. His active career ended early, shortly after his 30th birthday, after several discreet seasons in the Minors and the Cuban winter circuit.

However, he stood out for his work as a scout and coach in Cincinnati, Houston and Cleveland. As part of that work, he came across Tany Pérez in 1960, a diamond in the rough that he knew how to distinguish and later convince to take him to the United States to play professional baseball.

Pacheco’s plan was for the young man to begin his development in the Minors, specifically in the Havana Sugar Kings, one of the branches affiliated with the Reds. Tany did not hesitate to follow him and agreed to pursue his dream of playing in the Major Leagues, something that he would achieve a few years later.

“I used to play baseball and help my father with his work in the sugar mill. Tony Pacheco signed me with the Cincinnati franchise and at first, when I was in the Minor Leagues I returned to Cuba with my family, but later the trips between both countries were closed. I adapted with my mind set on succeeding,” Tany said in an interview with El Nuevo Herald.

His first steps in the United States were not entirely easy. He was assigned to the Class D branch of the Reds in Geneva, New York, where he was tormented for knowing almost no English. According to him, the waitresses in the restaurants did not know Spanish and could not translate the menus for him, and it was only a while later that he realized that if he ordered chicken, he would get a hot plate.

In 1963, Dave Bristol, his manager in Macon, told him that he was very skinny and helped him eat some of his favorite dishes: meat, rice, beans… He gained almost 40 pounds and then Bristol himself advised him to lose a little weight. Faced with that madness, the young Cuban was direct: “Make up your mind,” he told his mentor, who left the seed sown so that Tany would find his ideal weight.

Despite the setbacks, Pérez started hitting the ball hard early. In the Minors, he became the terror of the adversaries, with 97 homers and 409 RBIs in a span of four years, in which he was continuously selected as the best third baseman of his level until he achieved the MVP of the Pacific Coast League in 1964.

Thus he made his way to the Majors, where he wrote countless chapters of success during a 23-year career. He played with Cincinnati for 16 seasons, three with Montreal and Boston and one with Philadelphia. In this period, he played five World Series and won two (1975 and 1976), and earned seven trips to the All-Star Game.

“Big Dog,” as he was nicknamed, was a true phenomenon in the 1970s, when he was part of the legendary “Red Machine.” That dream team with Tany, Bench, Rose, Morgan, Dave Concepción, George Foster, César Gerónimo and Ken Griffey Sr., won almost a thousand games in 10 years and won four National League pennants.

The Cuban was not a simple spectator in that show, although sometimes he was out of the spotlight. “Pete Rose was getting his 200 hits, Bench was doing his thing, but Pérez was in the background with his 100 RBIs per year. You saw the endnotes of stories in the newspapers: ‘Oh, by the way, Tany Pérez hit a three-run homer to win the game,’” said his partner Pat Corrales wryly in the review of the Hall of Fame of the Cuban.

But it’s clear that Tany could hit. In the 1970s, he finished second in RBIs (954, behind Johnny Bench), third in doubles (303, behind Pete Rose and Al Oliver), fourth in extra-base hits (572, tied with Bench and surpassed by Bobby Bonds and Reggie Jackson) and sixth in hits (1,560, behind Rose, Rod Carew, Oliver, Lou Brock and Bonds) among all players who played in the Majors.

If we look only at the zenith of his career, between 1967 and 1977, the numbers are even more impressive, to the point that he completely led all major leaguers in extra-base hits (652) and RBIs (1,119), with at least 90 RBIs during 11 consecutive seasons.

“With men in scoring position and the game at stake, Tany is the last opponent you want to face.” With those words, Willie Stargell, one of his usual opponents with Pittsburgh, perfectly summed up the level reached by the young man that Tony Pacheco discovered in the Violeta sugar mill town.

And one of the most significant things is that Tany wrote wonderful stories on the diamond while he suffered from not being able to see his family for years, something that he finally achieved in 1972, after obtaining a 20-day visa to travel to Cuba. On the island, he met his parents, José Manuel and Teodora, with whom he cried, hugged and reviewed in detail all that he had achieved in more than 10 years of career in the United States.

According to Tany Pérez himself, that trip was a breath of air, a kind of reaffirmation that he made the right decision to sign up with the Reds. “I just can’t say that I regret coming to the United States to play baseball. My family knows how much I like baseball and they agree with the decision I made,” said the star player in the book Latino Baseball Legends: an Encyclopedia.

Tany Pérez’s going to the United States certainly gave rise to one of the most spectacular careers among the more than 200 Cuban players who have stepped onto a Major League field. The first baseman left an impressive legacy for his performance, but he was also an influence on future generations of Latino players who made their way to the Majors.

“Pérez was a fatherly guy in the dressing room, especially with the Spanish-speaking players. They admired him and related to him through his origin and his language,” said Pete Rose, Tany’spartner for many years.

The Cuban, in addition, was an example of perseverance. He played until he was 44 years old and, although he was no longer the same on the final stretch, he left outstanding stories in the epilogue of his career. For example, in 1984 he became the longest-serving pinch-hitter to hit a walk-off-HR home run in a Major League game. At 42 and 110 days, wearing the Philadelphia Phillies shirt, the player from Ciego de Avila threw the ball to reliever Don Robinson (Pittsburgh) in the eleventh inning and gave his team a 7-5 victory.

As if that weren’t enough, in 1985 he also became the oldest Major League player to hit a grand slam. In his return to the Reds and facing Dave Rucker (Philadelphia), the Cuban homered with a full house just before his 43rd birthday.

The first of these records lasted 29 seasons, until 2013, when Jason Giambi, 42 years and 259 days old, hit a pinch homer to decide a game for Cleveland. For its part, the second record remained untouchable for nearly two decades, until Julio Franco homered with full bases in 2004 and 2005, when he was 45 and 46, respectively.