“It is false that Cuba interfered or tried to interfere in the U.S. elections,” Carlos Fernández de Cossío, Director General for the United States of the island’s Ministry of Foreign Relations, wrote on his Twitter account. 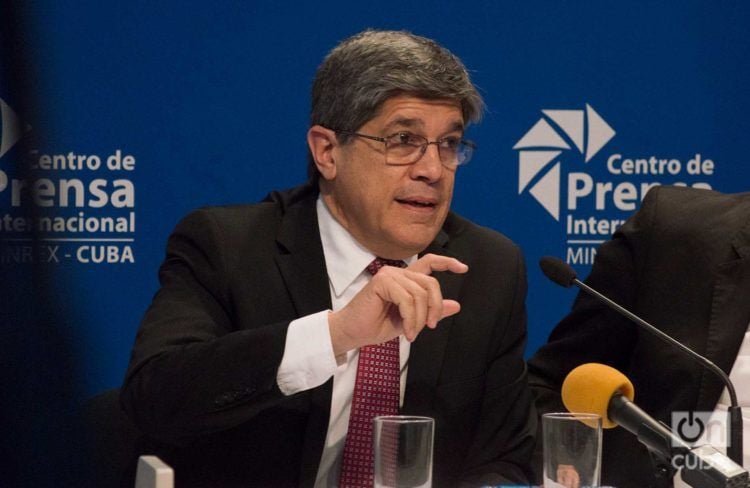 The Cuban Foreign Ministry denied having interfered or having tried to interfere in the last elections in the United States, after this Tuesday the U.S. intelligence agencies published a report on the alleged foreign interference in the electoral process.

“It is false that Cuba has interfered or tried to interfere in the U.S. elections,” Carlos Fernández de Cossío, Director General for the United States of the island’s Ministry of Foreign Relations (MINREX) wrote on his Twitter account.

The senior diplomat emphasizes that the U.S. government itself confirmed the fact “in the face of the falsehoods spread in that country for propaganda and defamation purposes,” and pointed out that “the lie is part of the dirty war against Cuba.”

Fernández de Cossío’s statements come after U.S. intelligence agencies (including the CIA and the National Security Agency), in a 15-page report indicated that Hezbollah, Cuba and Venezuela “took some steps to influence the elections,” but they were “smaller in scale” than the attempts by Russia and Iran.

In the case of Cuba, the intelligence agencies affirm that Havana tried to promote “narratives” against Trump and the Republicans, and in favor of the Democrats in the Latin American community in the U.S. Likewise, they pointed out that “Cuban intelligence probably carried out some low-level activities to support this effort.”

Meanwhile, regarding Venezuela, they considered that President Nicolás Maduro had the “intention, but probably not the ability to influence public opinion” against Trump, and acknowledged that they had no information to suggest that the current or previous Venezuelan government was involved in “attempting to compromise the electoral infrastructure” of the United States.

The idea that Cuba and Venezuela had influenced the U.S. elections had been publicly launched last November by Sidney Powell, a lawyer for the Trump campaign, who then said at a press conference that “communist money” had been used for this purpose, and also implicated China in the alleged interference.

The lawyer, who shortly after would be separated from the legal team of the then president, also affirmed at that time that the Dominion Voting Systems software, used during the elections, “was created in the South American nation to cast doubt on the legitimacy of the results obtained,” which was denied by the U.S. Cybersecurity and Infrastructure Security Agency.

After Powell’s statements, Cuban Foreign Minister Bruno Rodríguez considered that the lawyer’s words were “pure slander” and said that Trump’s representatives were lying “mercilessly by spreading false information about the alleged Cuban interference in the U.S. elections.”

In addition, he emphasized that, unlike the U.S. State Department, “Cuba does not interfere in the electoral process of other countries.”

A companion report by the Justice and Homeland Security Departments, released now, “also rejected false accusations promoted by Mr. Trump’s allies in the weeks after the vote that Venezuela or other countries had defrauded the election,” according to The New York Times.

The report by the U.S. intelligence agencies, which the New York publication considers “the most comprehensive intelligence assessment” on the subject, concluded that Russian President Vladimir Putin interfered in favor of former President Donald Trump, while Iranian Supreme Leader Ali Khamenei tried to harm the Republican leader.

Specifically, the intelligence agencies claim that Putin “authorized” a “wide range” of operations to undermine public confidence in the electoral process and exacerbate divisions in the United States in order to help Trump and harm Biden as well as the Democratic Party.

In another similar report published four years ago, U.S. intelligence agencies claimed that Putin influenced the November 2016 elections because he felt a “clear” preference for Trump, who was elected over the Democrat Hillary Clinton. This time, however, Putin did not order cyberattacks and his “main tool” was the use of groups linked to Russia to create a series of narratives, including false or unsubstantiated allegations about Biden.

In the case of Iran, the report highlights that there was a “covert multi-pronged campaign of influence” by the Islamic Republic to undermine support for Trump. It also points out that Khamenei “authorized” a campaign by the Iranian armed forces and its intelligence services that included cyberattacks.

As for China, the document concludes that the government of that country “did not deploy interference efforts,” because it believed that the risk of interfering and being discovered outweighed any benefit.

“China sought stability in its relations with the United States and considered that none of the election results were going to be advantageous enough for China to risk a setback if caught,” the text states.

During the election campaign, without providing evidence, Trump repeated that China was trying to favor Biden because he had deployed a tough trade policy with the Asian giant.