The new decree-laws approved were one on the Technical Advisory Council, another on postal services and a third that recognizes educational centers of the armed forces as universities, according to the island’s National Assembly. 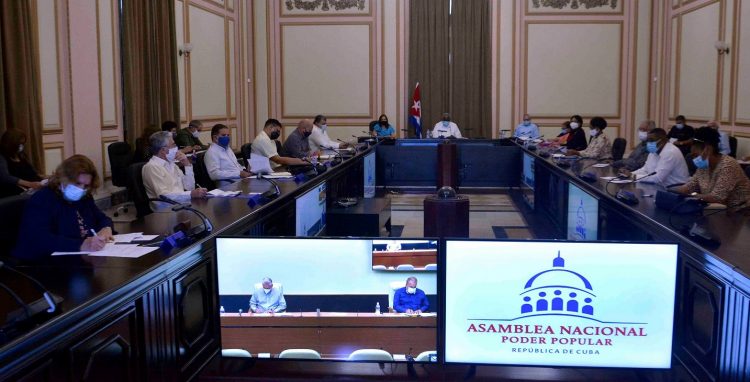 Session of the Council of State of the Republic of Cuba, Tuesday, February 16, 2021. Photo: Asamblea Nacional

The Council of State of the Republic of Cuba approved this Tuesday three new decree-laws “in compliance with its legislative work,” according to the island’s National Assembly.

The approval took place during a session of that collegiate body, which represents the Assembly between its sessions, held in Havana’s Capitol and in which Cuban President Miguel Díaz-Canel and Prime Minister Manuel Marrero participated via videoconference.

The new decree-laws approved were one on the Technical Advisory Council, another on postal services and a third that recognizes educational centers of the armed forces as universities. However, this time the agenda did not include the expected decree-law on animal welfare, officially scheduled for the current month and of which the Cuban parliament’s note does not mention.

As explained by the National Assembly, the Decree-Law “On the Technical Advisory Council” establishes “the institution in the organs of the State, agencies of the Central State Administration, higher of Business Management organizations, national entities, local organs of People’s Power, and in all pertinent institutions” a council of this nature” with the objective of studying and issuing recommendations related to their activities, which guarantee making decisions based on the application of science, technology and innovation.”

Meanwhile, the Decree-Law “On Postal Services” establishes “the regime in which these services are provided and the rules for the different postal operators,” based on the premise that “updating the legislation on this important activity ensures the stability in its services and strengthens the exercise of the regulatory function of the State.”

The Council of State session also addressed the current monetary reorganization through an informative intervention by Marino Murillo Jorge, head of the Commission for the Implementation and Development of the Economic and Social Policy Guidelines, while President of the National Assembly Esteban Lazo “reported on the work of the permanent commissions of that body and of the deputies during the period,” the note states.

According to the Cuban legislative schedule, updated by the Assembly in its last session of last year due to adjustments made in the current context of the coronavirus pandemic, in the remainder of the current legislature (2021-2022) 26 laws are expected to be presented to parliament, while the Council of State must approve 29 decree-laws, which would be 55 regulatory provisions approved.

When reporting on this, Minister of Justice Oscar Manuel Silvera affirmed that the Decree-Law on Animal Welfare—whose approval was initially scheduled for last November—should have been approved “at the meeting of the Council of State corresponding to February 2021.” This was recently confirmed to OnCuba by directors of the Ministry of Agriculture, the entity that has led this decree-law’s preparation, and also by the official media.

It remains to be seen, then, if the Council of State will meet again this month—an unusual practice in this body—or if, once again, the approval of the regulation is postponed.