After "48 hours of chaos" and thanks to the mediation of the British ambassador on the island, the Cuban hotel facilities received "instructions" to allow the affected tourists to leave without having to pay. 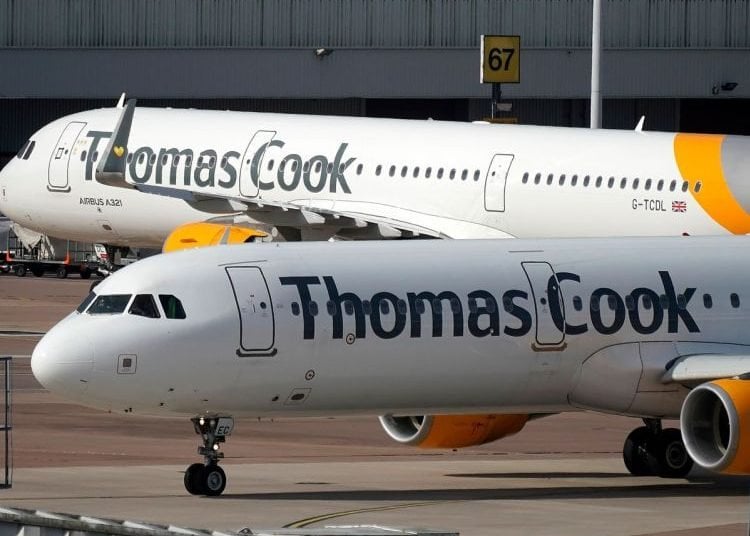 Aircraft of the British company Thomas Cook, which declared itself in bankruptcy on September 23, 2019 leaving thousands of tourists stranded worldwide. Photo: manchestereveningnews.co.uk / Archive.

Tourists kept in Cuba after the bankruptcy of British tour operator Thomas Cook started leaving the island after Cuban authorities allowed their departure and their initial flights started being rescheduled.

A first flight took off from Holguín airport to Gatwick, London, this Wednesday, and others are planned for the next few days from this eastern city and the resorts of Cayo Coco and Varadero, where some 2,000 travelers affected by the bankruptcy were concentrated.

This was reported on Twitter by United Kingdom Ambassador to the island, Dr. Antony Stokes, who has maintained an active communication with tourists―updating them on changes in schedules and itineraries―and has served as a mediator before the Cuban authorities to resolve the crisis.

For #ThomasCook customers in #Cuba flying tomorrow 26 September from Holguín (HOG): flight destination is now London Heathrow. Transfers to Manchester are being arranged. Updated info at CAA website. Thank you for your understanding. https://t.co/YPdOFPNg0Y

Previously, several Thomas Cook staff members and British customers said they were not allowed to leave Cuba without paying for the services contracted by the tour operator, according to the Daily Mail in its online version.

The British publication reported that several Cuban hotels refused to let tourists go without paying, even though they had previously paid Thomas Cook for the trip. Based on testimonies and publications of family members on social networks, the media said that travelers were being “kept as ransom” until the company paid what it owed to the island.

Some of the visitors used adjectives such as “trapped,” “retained,” “isolated,” “blocked” and “detained” to describe their situation in Cuba in the hours that followed the bankruptcy of the tour operator. Some even said they had been “threatened” by the hotel’s security, according to the Daily Mail.

Before these events were reported, a British Embassy source had said that those affected had “their stay guaranteed in Cuban hotels” until their return was rescheduled.

Finally, “after 48 hours of chaos” and through the mediation of the British ambassador, the Cuban hotel facilities received “instructions” to allow the affected tourists to leave without having to pay. Stokes himself explained it on Twitter and thanked customers for their patience in these “distressing circumstances.”

Urgent for #ThomasCook customers: hotels in #Cuba now have authority/instruction to allow customers, and air crew, to depart without paying (on basis of ATOL guarantee). Very grateful for patience of all affected in distressing circumstances

The diplomat also thanked the Cuban government “for working closely with the UK to address some practical and logistical issues stemming from Thomas Cook’s sad end.”

Grateful to #Cuba govt for working closely with UK to address some practical & logistical issues stemming from #ThomasCook’s sad end. I’m sorry this remains difficult & stressful for many, notwithstanding fantastic work of ex Thomas Cook staff, @VirginAtlantic staff & many others

Tourists who traveled to Cuba through Thomas Cook are part of the more than 600,000 worldwide―150,000 of them from the United Kingdom―affected by the bankruptcy of the tour operator this Monday after 178 years of history.

The fall of the group―which operates in 16 countries, has 105 aircraft and 200 hotels and hotel complexes with its brand―also affects those who have already paid for reservations in advance, totaling millions of pounds.

Thomas Cook went into suspension of payments when it did not obtain the additional funds of 200 million pounds (227 million euros) required by banks such as RBS and Lloyds to face the winter months.