Cuban doctors Landy Rodríguez Hernández and Assel Herrera Correa were kidnapped in the city of Mandera (northeast Kenya), on the border with Somalia, the target of jihadist attacks in the past. 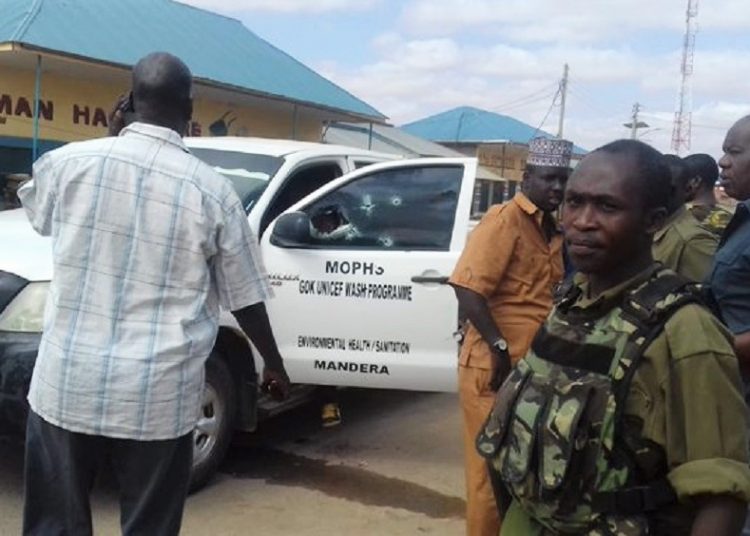 The car in which the Cubans were traveling before the kidnapping. Photo: twitter.com/ntvkenya

Two years today since the kidnapping in Kenya of the surgeon Landy Rodríguez Hernández and the specialist in general medicine Assel Herrera Correa and their subsequent transfer to Somalia by members of the Somali jihadist group Al-Shabaab and there are still details of the circumstance in which they are or signs regarding their future.

The two Cuban doctors were kidnapped in the city of Mandera (northeast Kenya), on the border with Somalia, the target of jihadist attacks in the past. On April 12, 2019, the two doctors were traveling in a convoy to the Mandera hospital protected by armed escorts when they were intercepted after a shooting in which one of the police officers responsible for their safety died.

Two years later, the Kenyan government affirms that the efforts to rescue the doctors continue, a position it has always maintained, but that, to date, has not borne fruit.

Police are interrogating driver of the vehicle in which two Cuban doctors were in before being abducted in Mandera. The medics are suspected to have been taken to Somalia pic.twitter.com/7EAUUYreRD

“We are working with our neighbors and partners to guarantee their safe release,” so that “they can be reunited with their families,” Kenyan government spokesman Cyrus Oguna told EFE.

Asked if the doctors are still alive in Somalia, Oguna replied that “the collaborative effort to get these doctors released” is a “sign that they are alive,” although so far no evidence has been published to prove that fact.

On the possibility of a speedy release, the spokesman refused to create any expectations. “I cannot say exactly when the process can conclude,” the spokesman concluded, adding that the doctors remain “in the hands of the militants” of Al-Shabaab.

There is no news to announce about the kidnapping from the Cuban embassy in Nairobi. “We have nothing new,” the Cuban ambassador, Ernesto Gómez Díaz, succinctly told EFE.

On February 24, Cuban Minister of Health José Ángel Portal Miranda indicated that he had a telephone conversation with his Kenyan counterpart, Mutahi Kagwe, in which they addressed the kidnapping.

“We talked about the continuity of the efforts to achieve the safe return to the homeland of our two kidnapped doctors,” Portal revealed.

Something similar was affirmed this Monday by Cuban President Miguel Díaz-Canel, who from his Twitter account said that he had spoken with Kenyan President Uhuru Kenyatta. According to him, he “ratified the commitment of his government with the efforts to guarantee the safe return of our doctors.”

Díaz-Canel also said that he spoke with the relatives of the doctors who remain captive “to ratify the commitment to permanent steps to ensure their safe return to the homeland.”

The public pronouncements of Kenya and Cuba in favor of the negotiations to free the doctors contrast with the silence that the government of Somalia usually keeps on the case.

That silence was broken on October 7, when the then Somali Minister of Foreign Affairs Ahmed Isse Awas dismissed as “false” the alleged release of the doctors announced hours before by sources of the country’s intelligence service and quickly spread by press agencies such as The Associated Press.

“The government of Somalia is working to release the hostages and continues to cooperate with the Cuban government, but the release has not yet occurred,” Awas clarified.

Two days earlier, on October 5, Cuban Foreign Minister Bruno Rodríguez had disclosed on his
Twitter account that he spoke with Awas to thank him for “the support and efforts of his
government” in “guaranteeing the safe return” of the doctors.

THE DOCTORS’ WHEREABOUTS, A MYSTERY

Beyond these diplomatic contacts, limited to hopeful statements without going into details about the efforts to get Herrera and Rodríguez out of Somalia alive and the probability that this will happen, very little is known with certainty about the doctors’ situation.

In May 2019, traditional leaders from Kenya and Somalia who traveled to the Somali region of Jubaland controlled by Al-Shabaab to negotiate on behalf of the doctors confessed to seeing the doctors providing medical assistance to the local population.

According to the mediators, the kidnappers demanded a reward of $1.5 million as a condition for their release, the Kenyan press reported at the time.

A year ago, a tax collector in areas dominated by Al-Shabaab assured EFE that the jihadist group takes advantage of Cuban doctors to care for its wounded combatants and train its own doctors, under the surveillance of special security brigades that supervise the movements of the hostages.

Herrera and Rodríguez are part of a contingent of 100 Cuban professionals—including radiologists, plastic and orthopedic surgeons, neurologists and nephrologists—who arrived in Kenya in 2018 following a bilateral agreement to improve access to specialized health services in this African country.

After the kidnapping, the Kenyan authorities relocated in safer areas Cuban doctors deployed in Kenyan counties bordering Somalia, where Al-Shabaab is fighting to establish a Wahhabi (ultra-conservative) Islamic State.