A report by the organization highlights that since 1963 the Caribbean country “has sent more than 400,000 medical professionals on 164 missions to countries in Africa, America, the Middle East and Asia, in addition to providing humanitarian aid in cases of catastrophes, emergencies and epidemics such as Ebola and more recently COVID-19.” 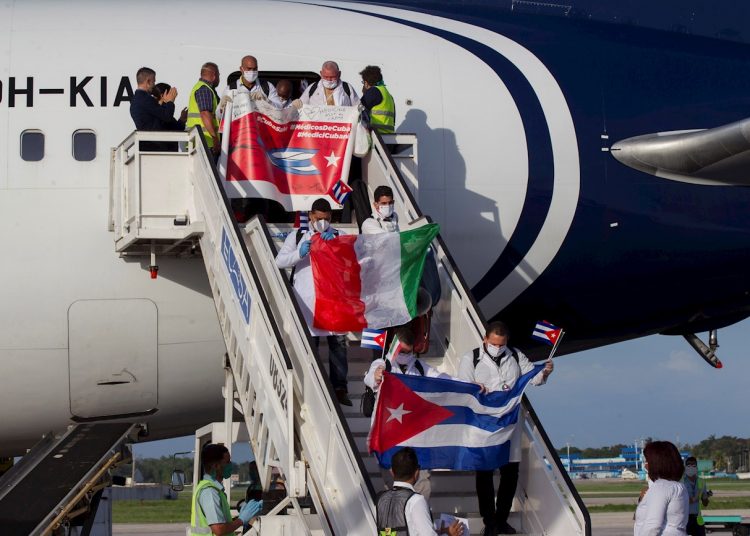 Arrival in Havana of Cuban doctors who worked in the Italian region of Lombardy in full coronavirus crisis. Photo: Yamil Lage/EFE/Archive.

The United Nations Educational, Scientific and Cultural Organization (UNESCO) recognized Cuba’s role in scientific and medical diplomacy, particularly in the Latin American and Caribbean region, in a report presented in the context of celebrations for World Science Day for Peace and Development.

“Cuba is one of the countries with the longest tradition in scientific and medical diplomacy in the region based on an advanced biotechnology industry and a robust health system,” says the report, quoted by the Cuban Foreign Ministry and by the island’s media.

In the document, entitled “Scientific Diplomacy in Latin America and the Caribbean: Strategies, Mechanisms and Perspectives,” UNESCO highlights Cuba’s leading role in scientific cooperation and recognizes the international prestige and political capital gained by the Caribbean nation in this area, the Cuban Foreign Ministry’s website highlighted.

The report emphasizes that since 1963 the Caribbean country “has sent more than 400,000 medical professionals on 164 missions to countries in Africa, America, the Middle East and Asia, in addition to providing humanitarian aid in cases of catastrophes, emergencies and epidemics such as Ebola and more recently COVID-19.”

In addition, it points out that Cuba “also participates in South-South cooperation projects in fields such as health, education and agriculture, and contributes to training human resources in Latin America and the Caribbean through international schools in various disciplines from public health to climate resilience.”

UNESCO presented the report during the Open Science Forum for Latin America and the Caribbean (CILAC), a space for reflection and interaction on the problems of science, technology and innovation management, which seeks to contribute to the implementation of the 2030 Agenda for Sustainable Development in Latin American and Caribbean nations.

“In a globalized context, where coordination between the spheres of science and foreign relations is a key factor in responding to present and future challenges, this report calls on the Latin American and Caribbean region to strengthen scientific diplomacy as an opportunity to improve international relations and to adopt innovative strategies for scientific collaboration between its countries and with the rest of the world,” says the Cuban Foreign Ministry about the document.

This year, Cuba has sent some 50 medical brigades, made up of more than 3,000 health workers, to combat COVID-19 in nations of Europe, Africa, the Middle East, Latin America and the Caribbean. For this work, various international organizations have publicly supported the candidacy of the Henry Reeve International Contingent for the Nobel Peace Prize.