This was stated on Monday by Minister of Health Ana Barceló, who said that work is underway to ensure that at a certain time it may be necessary to “refresh” the local health teams due to the pressure of care and give them some time off. 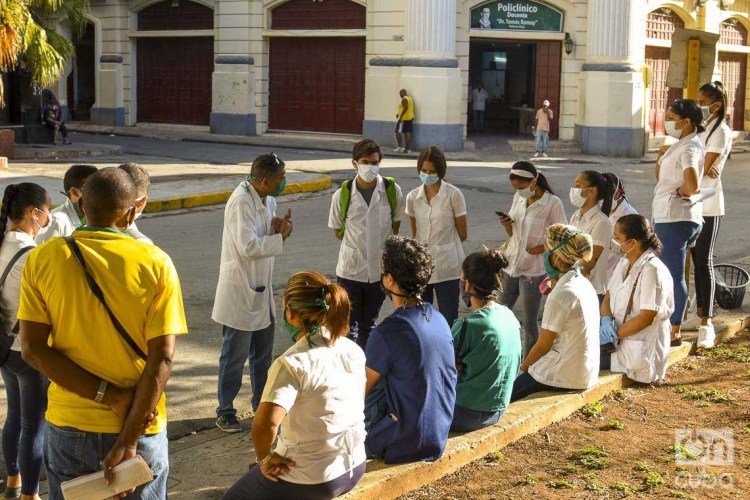 Doctors and medical students, who carry out screenings in Havana to detect possible suspected cases of COVID-19. Photo: Otmaro Rodríguez.

The Generalitat Valenciana is contemplating the possibility of requesting health professionals from other countries, such as Cuba, if the situation caused by COVID-19 is prolonged, in order to guarantee the staff of the Community of Valencia “moments of rest” and that they don’t suffer as much pressure while providing care.

This was stated this Monday at a press conference by Minister of Health Ana Barceló, who said that work is underway to ensure that at a certain time it may be necessary to “refresh” the local health teams due to the pressure of care and give them some time off.

“There are hospitals that have more pressure and if this is prolonged, we need them not to live with so much pressure and have moments of rest,” according to the minister, who added that they have in mind “the possibility of being able to bring professionals from another country if necessary.”

Barceló also affirmed that in principle the Generalitat would contemplate requesting reinforcements from Cuba, because of the language and to facilitate communication, but China and other countries are also considered, with professionals who speak English, but guaranteeing that there can be “fluid” communication with the Spanish staff.

This reinforcement of personnel from other countries is also contemplated to join the health teams that will attend the three field hospitals that will be installed in each province.

At the moment they are only “contacts,” with nothing concrete yet, but there is a determination to activate this option if necessary, reported the newspaper La Vanguardia.

Despite finding “certain resistance” in the Spanish government, after the first consultations, the operation is not ruled out and, in fact, it is expected that if the time comes, Pedro Sánchez’s executive will be asked to authorize it, as has already happened in other countries like Italy, according to the newspaper.

“Cuba has excellent professionals and they are willing to help,” sources from the presidency of the Generalitat, cited by La Vanguardia, pointed out.

In addition, they said that the autonomous executives of the Balearic Islands and the Canary Islands would also be studying the possibility of requesting doctors from Cuba.

This weekend, the Principality of Andorra incorporated 38 Cuban doctors to the fight against the coronavirus. This medical brigade is the second one sent to Europe and the thirteenth the island sends to other nations “as a sign of its tradition of solidarity and deep humanism,” according to the Cuban government.

On their way to Andorra, Cuban doctors were applauded by passengers and taxi drivers this Sunday at the Madrid airport exit.

In total, more than 40 countries have requested the help of Cuba to face the pandemic that is present in 174 nations of the world, and that until now has infected more than 745,000 people and caused the death of more than 35,000.