The status of these spaces in the country is still not entirely legal, although several facilities with a “similar” concept exist and persist on the island. 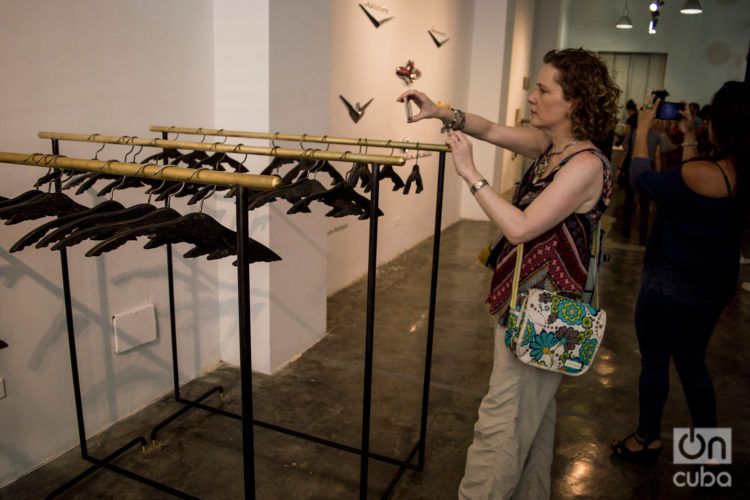 Just a few months ago a group of regulatory measures for private sector activity was announced in Cuba, where the island’s State defined a series of prohibited activities and an immense list of permitted jobs for this circuit.

Among the 124 activities where self-employment is not allowed, according to the National Classifier of Economic Activities (CNAE), are those of commercial art galleries; as well as the management of these types of spaces and cultural programming activities related to the plastic arts.

Basically, this framework limits all work related to the visual arts that involve private actors, outside the mechanisms established by the Ministry of Culture. Such mechanisms are generally produced through the Cuban Fund for Cultural Assets (FCBC), in conjunction with the National Council of Plastic Arts (CNAP) and the Génesis enterprise.

However, Decree-Law No. 106 on the labor condition and commercialization of the works of the creator of plastic and applied arts of 1988, recognizes the creator of works of plastic arts that “works independently or performs artistic creation without prejudice to their employment relations to an entity,” with the purpose of “setting out the ways for their protection and support, as well as the basic rules that will regulate the commercialization of said works.”

Seen thus, Cuban artists can market their work in the entities designated by the Ministry of Culture for the aforementioned purpose, since this Decree-Law establishes that “The marketing entity may create artistic production workshops, exhibition and salerooms and any other type of establishment, for the expansion of the possibilities of commercialization of the works of artistic creators.”

It is precisely here where the problems begin, but also part of the solutions and subterfuges that artists have found in recent times to be able to commercialize their work on the island, in a market that is almost non-existent in the country.

Given the almost zero presence of legally recognized commercial galleries, the section on “artistic production workshops” mentioned above has been a palliative not only for artists, but also for curators and gallerists in the country not associated with state institutions, to start their businesses under this legal protection, although it is valid to clarify that these studios-workshops; galleries-workshops, or whatever their owners decide to call them, operate under the protection of the FCBC, with a greater or lesser degree of relationship with this entity.

The Cuban art market has not yet fully taken off, despite the fact that it has been looking for alternatives for its consolidation for more than three decades. Here’s a bit of history: with the arrival of the Havana Biennial in 1984, and then with the aforementioned decree, in 1988, together with the economic crisis that began to affect Cuba as of the 1990s, the first steps were taken towards the formation of an incipient national art market. Of course, always through foreign buyers and collectors, many from the United States. These buyers were (re)discovering Cuban art through those first biennials and then, like good fishermen in troubled waters, they took advantage of the country’s financial crisis in the last decade of the last century to appropriate, at reasonable prices, works by outstanding Cuban artists, some from the avant-garde and also pieces by creators of the generation of the 1980s, who were taking their first steps in the exhibition world.

Parallel to this, the state gallery system also began to take its first commercialization steps with the creation, in 2001, of the Genesis gallery network, and the following year with the Subastas Habana auctions, which were maintained with considerable steadiness during little more than 10 years, and that, nevertheless, stopped being carried out under circumstances that have not yet been fully clarified.

It was precisely in this boom of the foreign art market that the first private spaces began to emerge in the country (Estudio Figuera-Vives, Avistamiento, among others), a movement that increased with the “Obama era“ and the opening to U.S. tourism, which allowed a greater presence of this type of space, although this impetus did not last long with Trump’s arrival to the presidency and the measures that limited the arrival of U.S. travelers to the island.

Beyond the artists established in circuits of the international art market (the least) and the collectors who are connoisseurs of the national visual arts environment, in Cuba we lack not only an ecosystem of commercial galleries, but we also do not have a structured national art market, and I’m not just referring to infrastructure and artists’ works; also to buyers.

Herein lies another of the main shortcomings of the almost invisible art market in the country. We cannot aspire to a systemic type of national clients without an established circuit of galleries, with offers for all tastes and pockets, since we know that art is expensive, a luxury in certain circuits, but with the resources and mechanisms established for its commercialization, it also doesn’t have to be inaccessible.

Let’s go beyond the established collector, the investor businessman, or the tourist with enough solvency to pay thousands of dollars for a painting, why can’t a Cuban acquire originals from the artists he follows and admires? We are not talking about a painting by Tomás Sánchez, or a Fabelo, or a Sosabravo, or a sculpture by Pedro Pablo Oliva or Agustín Cárdenas, or a work by Carlos Garaicoa, to mention some examples of sought-after and prestigious artists, but there are hundreds of more accessible artists, economically speaking, with an interesting repertoire (painting, silkscreen, engraving, sculpture or installation) that is not available or sufficiently promoted in the spaces established by the State today.

This is how many collectors began to carve out their record, a possibility that we do not have right now and that is necessary to awaken the country’s visual arts panorama, quite somnolent due to the lack of attractive proposals by a large part of the state institutions.

An opening at the national gallery level would be excellent news in the face of the arrival of the next Havana Biennial, also to arouse greater interest in an event that has fallen into disrepair in recent times, due to a disorganized and unbalanced curatorship, with few proposals to attract the public looking for the best of the national and international visual scene in this type of event.

The possibility and guarantee for the artist to be able to exhibit and commercialize regularly his work in a space would be another incentive for young creators not established in the market, and also for those with more years of careers, who in the absence of commercial galleries in the country can only resort to two options: to qualitatively and quantitatively belittle their work in search of greater monetary acquisition, or subsist promoting their work on social networks in search of the highest bidder.

In recent times we have even seen the creation of alternative spaces for the promotion of Cuban art in the digital environment, with virtual galleries, NFTs and other alternative spaces to traditional installations, another alternative little exploited by the FCBC or the CNAP, although It is valid to highlight some recent collaborations of state institutions with private entities in these times of pandemic and physical isolation.

The Cuban art market will not change suddenly, not even with the magical appearance of galleries in every corner of the country. Art, a friend told me, is not sold like croquettes are sold in a fries stand, it takes serious and careful work so that everyone has their space, according to the interests of the gallery owner and the artists on their payroll.

Nor is it about sects or circles of some of the privileged, the idea is to conceive spaces for each manifestation within the visual arts, according to criteria of age, styles and also, it cannot be denied, personal relationships among those involved.

If we do not take this step at this time of crisis and relative economic openness, we will have to wait (once again) to depend on the goodwill and insight of people—related or not—to Cuban art, limiting those of us who live in the country, only to be able to appreciate art from other people’s walls.