The actress, who has just won the Gibara Film Festival’s Performance Award for "El viaje extraordinario de Celeste García," talks about her career in Cuba and in Spain. 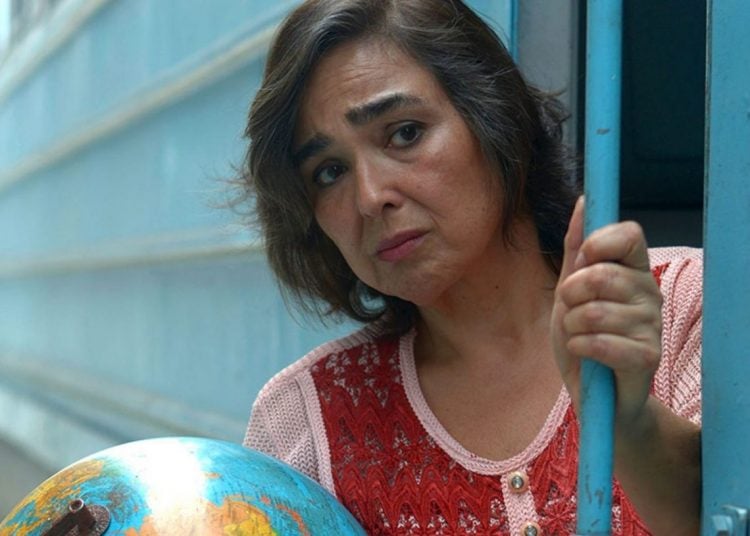 The film meant the return of the well-known artist to Cuban cinema, a wish she says she has cherished for years.

“I fell in love with the script when Arturo Infante, the director, and Claudia Calviño, the producer, sent it to me. Then I came to shoot in Havana and I loved the experience, working with young and super-talented young people I didn’t know. They spoke to me using the ‘usted’ that is used out of respect for older people and I thought, ‘Could it be that I look very old?’ It’s very nice to be part of a special creative environment,” she said in an interview with the newspaper Juventud Rebelde.

The actress recalled that she hasn’t made a film in Cuba for more than 15 years.

“Since 2003 I had not filmed here, after Las noches de Constantinopla (Orlando Rojas) and Frutas en el café, by Humberto Padrón, the first independent film made in Cuba, a project in which, together with Jorge Perugorría, we played the part of a scandalous couple,” she said.

For María Isabel (Havana, Cuba; July 4, 1964), one of her greatest wishes is to again make films in her native country.

“I would love it. I have always wanted to work in Cuba. When I was with Laura de la Uz in Spain or I was coming, and she told me that she was making a movie, I invariably asked her: ‘Could there be a small part for me, no matter how small? If you find out, let me know,’ but it didn’t happen. It’s so fantastic, so nice, it’s like going back to the womb, and that makes me feel especially happy.”

The actress has had a successful career in Spain where she has come to work with figures such as director Pedro Almodóvar, but she remembers that in the beginning everything didn’t go smoothly.

“I came to Spain as a guest for a Film Week in Mallorca and then I was able to participate with a small show in a kind of theater fair that was taking place in Barcelona and which is no longer organized. Then I wanted to see the snow and I also wanted to stay to test myself. It was very difficult to start from scratch―when I was able to start―because there were at least some five years in which it was impossible for me.”

“It was only after that period,” she added, “that small roles appeared that I assumed as the greatest leading roles of my life. There I learned, which sounds so much like a set phrase, there are no small or big characters, but good or bad interpretations. I learned to give a lot of value to war, to the battles that one must wage every day. Nothing was like in Cuba, where everything flowed and I never had to work as a waitress or cleaning houses to pay for my career or to work as an actress. So I faced the real world. It was hard, really hard.”

After bringing down the first wall of difficulties, she began to open her way in Spanish cinema until she achieved notable recognition.

“One day they called me for a steady character in a series, Javier ya no vive solo, directed by Emilio Aragón, who also starred in it,” she said. “Emilio is a really impressive working partner, but I was very scared: I had not been in front of a camera for five and a half years and I had my reservations about being ‘normal,’ as if I didn’t deserve to be there; it was a psychological thing, a little weird. And, of course, in the second season they didn’t use me. There came a downturn again, I was already living in Madrid and worked doing surveys on the street, putting stickers, doing whatever came my way.”

Her work with Almodóvar put her, she says, on the radar of a large number of directors.

“It was Luis San Narciso, the casting director of Javier ya no vive solo, who called me again for Pedro Almodóvar’s movie Volver. They chose me and I also self-pressured myself, I was super scared. You have to be afraid of fear. Fear is paralyzing…. I rolled Volver, but nothing extraordinary happened, although it did put me in the sights of many directors.”

The actress explains that she was initially afraid when she made her film debut in the role of “Ophelia” in Una novia para David, a film, she says, that marked her deeply.

“I was very young  and I didn’t know how to stand in front of a camera, but I took it seriously, as if it were one of the [Communist] Youth’ tasks. That experience allowed me to understand that you could be disciplined, responsible and enjoy to the fullest, as if it were a party. I learned it and it hasn’t stopped happening to me either on television or in cinema or in theater, of course.”

About El extraordinario viaje de Celeste García, she thinks it was a film in which she was surrounded by love.

“El extraordinario viaje… has done very well at festivals, it has won very important awards, the most recent in Gibara: best film and best female performance…. It has been incredible, I am very grateful to Claudia, Arturo, the team. I shot it while in a little complicated health condition, since I had just had surgery 33 days before, but everyone took care of me with love and care,” concluded the actress, who classified herself as “an excessively sensitive person,” but who said she now knows she is also “very strong, very capable.”