This Sunday, Jorge Grau won the title in the air gun at 10 meters, while Eglys Cruz won a disputed silver medal in the rifle at 50 meters from three positions. 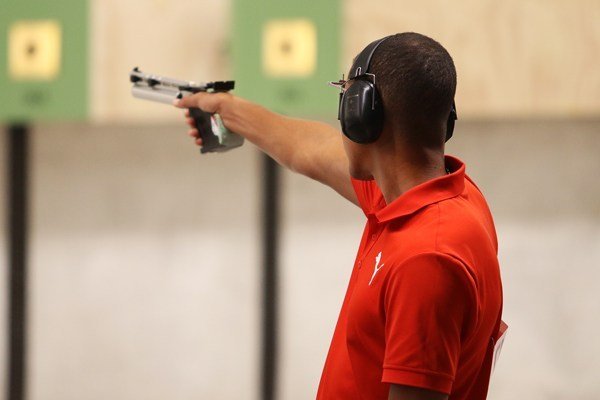 Cuban Jorge Grau won the air gun at 10 meters and got the ticket for the Olympics on Sunday July 28, 2019 at the Lima 2019 Pan American Games. Photo: Mónica Ramírez / Jit.

Sports shooting is the most prominent sport for Cuba in the first days of the Lima 2019 Pan American Games. The gold and the bronze won on Saturday by shooters Laina Pérez and Sheyla González, this Sunday were added to another title and a silver medal, in addition to two Olympic classifications.

The gold went to Jorge Grau in the air gun at 10 meters, the same modality in which his compatriot Pérez had won the previous day. To climb to the top and get the ticket to Tokyo 2020, the Cuban shooter defeated American Nickolaus Mowrer (silver) and Brazilian Julio Souza (bronze).

For her part, the experienced Eglys de la Cruz won a disputed silver medal in the rifle at 50 meters from three positions, which secured her ticket to the next Tokyo 2020 Olympic Games. She was only surpassed by the American Sarah Beard, while leaving third place for the also American Virginia Thrasher.

With this subtitle, De la Cruz became the most awarded shooter in the history of the Pan American Games, with four golds, an equal number of silver medals and a bronze, for an all-time record of nine medals.

Meanwhile, the female quartet in this specialty could not match the men and finished seventh, in an event dominated by Canada, Mexico and Argentina, in that order.

Another outstanding performance was that of pentathlon athlete Lester Ders, who was one step away from the podium, but won the ticket to Tokyo.

In boxing, the Cuban team had a perfect day, as the three men who climbed into the ring were victorious. Yosbany Vietía defeated Colombian Yilmar Ricardo 3-0 in the 52 kg; Roniel Iglesias (69 kg) did the same against Costa Rican Jimmy Omar Brenes; and at the close Erislandy Savón (91 kg) also defeated Canadian Bryan Colwell.

In this way, the three boxers secured the bronze medal and will seek to improve the color in the semifinals.

On the other hand, taekwondo did not do justice to itself and its two representatives this Sunday, Yamicel Núñez (57 kg) and Rogelio López (68 kg), were defeated with bulky markers in their first bouts and could not advance to the fight for the podium.

In collective sports, Cuban beach volleyball celebrated the going on to the semifinals of Leyla Martínez and Maylén Delís, better in two sets than the Costa Rican couple. The other side of the coin was the male pair of Sergio González and Luis Enrique Pérez, defeated in two sets by the Chilean couple and thus unable to dispute the medals.

And in men’s softball, the Cubans defeated the Mexican team 12-10. The island players scored eight races in two innings and now add a victory and a setback, the latter against the powerful United States. This Monday they will have another hard stumbling block when facing the Argentina world champion.