Herbie Hancock and the jazz embrace in Cuba 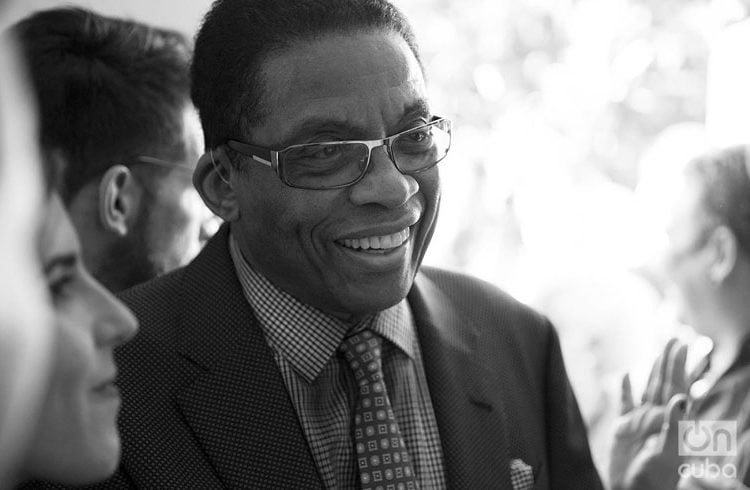 Herbie Hancock said it without flattery or smugness: “Cuba is the perfect place to celebrate jazz.”

It could seem a set phrase. Generous. Obliged by courtesy. But the winner of 14 Grammy awards doesn’t need to spare words. That he’s not in Havana on vacation.

Herbie Hancock traveled to Cuba as promoter of International Jazz Day, as a UNESCO Goodwill Ambassador, as a legend of a genre that has shaken world culture for more than a century.

In this scenario of supreme freedom that jazz is, Hancock does not need credentials. Chameleonic, rich, respectful and at the same time irreverent, he has practically experienced all the jazz styles of recent decades, from the hard and post-bop to jazz funk and electronic. As a keyboard player he has founded a unique style, an incomparable harmonic domain.

This Wednesday he was in a tribute given by UNESCO to the Plaza House of Culture, in El Vedado. The Jazz Plaza Festival, the star jazz event in Cuba, was created there more than three decades ago.

The Chicago-born 77-year-old musician did not perform during the ceremony; he did not place his hands on the piano as was the case, for example, with Cuban Alejandro Falcón. On the other hand he was lavish with his words. Lavish but precise.

“Everyone who appreciates jazz knows that it is the type of music that serves as a bridge to connect cultures; it is way of promoting dialogue and cooperation,” he said.

The celebration of International Jazz Day on the island, he commented, seeks to create “a deeper connection no matter the differences, a connection that has a profound impact on us and reaches our hearts.” Music, and Hancock knows this well, has that power.

As a symbol of those distances that diffuse jazz, Cuban Bobby Carcassés joined him to unveil the plaque dedicated by UNESCO to the Plaza House of Culture. They both presented those attending with an embrace. Their embrace. A jazz embrace.

By this Sunday, other greetings, new musical spells, programmed and also spontaneous, improvised and democratic like the spirit of jazz, the freest of all music, will surely arrive.

More than 50 artists from Cuba and the world will continue sharing concerts, workshops and performances. Students from Cuban conservatories and the U.S. Thelonious Monk Institute will do the same.

At the event’s culmination, this April 30 in the Alicia Alonso Grand Theater of Havana, Herbie Hancock will return to the stage. With him will again be Bobby Carcassés, as well as Chucho Valdés, Quincy Jones, Marcus Miller, Richard Bona, Marc Antoine, Takuya Kuroda, Ivan Lins….

Artists from all continents, of different creeds and origins, of different generations. They all speak the same language: jazz, the only, universal language…in Cuba.

Intelsat, an American company in Cuba

A year after “Furious 8” in Havana