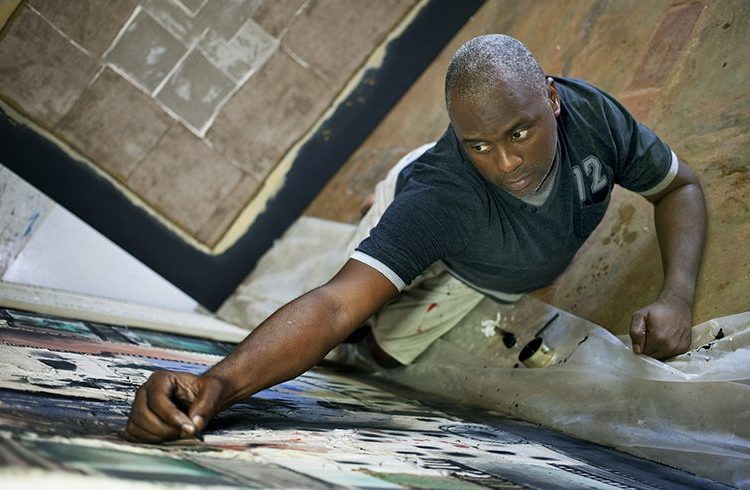 Photo: Courtesy of the artist

Curator Alejandro de La Fuente and visual artist Juan Roberto Diago have achieved an unprecedented event: presenting in the premises of Harvard University the exhibit “Diago: The Pasts of this Afro-Cuban Present”, a retrospective of the work of the artist. Diago is the first Cuban to have a solo exhibition in this University.

He is recalled in Cuba for his visual work and also for his appearance in the documentary Raza (Erick Corvalán, 2008), where he expresses his ideas about the representation of black bodies in the media. The artist has continued his work abroad and following his footsteps we found this exhibition inaugurated last February 2 in the Ethelbert Cooper Gallery of African and Afro-American Art, where it will remain open until next May.

How did this opportunity come up to exhibit in Harvard University?

The work that the institution carries out has a lot to do with my discourse as an artist, and Henry Luis Gates as well as Alejandro de La Fuente, directors of Harvard’s Afro-Latin American Research Institute, knew of my work. Alejandro has had important exhibitions in this field like “Queloides y Drapetomania,”in which I have been present, until one day we decided to start the project and here’s the exhibition and the book.

Which are the theme cores of the display?

The exhibition doesn’t have a theme core. They are works from different stages that almost always narrate conflict, resistance, nonconformity, hope. One can see the use of alternative materials since the start of 1993 up to 2015, but Alejandro also had his own vision about my work and some of the themes I have dealt with, such as history, and that is reflected in the exhibition.

Can the choosing of the works for a retrospective exhibition be difficult…why these 25 pieces?

Since the start the project was thought of around the exhibition space and collectors who had the most representative works from some stages were contacted, others were in galleries and even my own collection. Alejandro’s work as curator is behind this selection.

If out of these 25 works you had to choose only 5 to make known your career in these 20 years, which would they be and why?

It’s very difficult because all the works are like my children, I don’t differentiate between one and another. Each work of an artist leads him to another, and then to another, and only after time goes by, thanks to perseverance we become aware that we have something, that’s why I feel the same love for all of my works.

Presenting this exhibition in the United States would be like treading on the home ground of the renowned artists, how do you see this?

I think that the United States and Cuba have a point in common in History. Both were victims of the transatlantic slave trade and as a consequence there was a struggle for the civil rights of their descendants. Each country did so in their own way but in the end the desire was the same: social justice.

Do you plan to take to Cuba “Diago: The Pasts of this Afro-Cuban Present”?

Yes, I would like to. It would be like a reencounter, “the return to the country of birth” where all those pieces that are in different places of the world were made.

If you were given the opportunity to choose a phrase that incites persons, especially Cubans and black, to visit this exhibition, what would you say to them?

I would say like in one of my works: I am my race, my history, love.