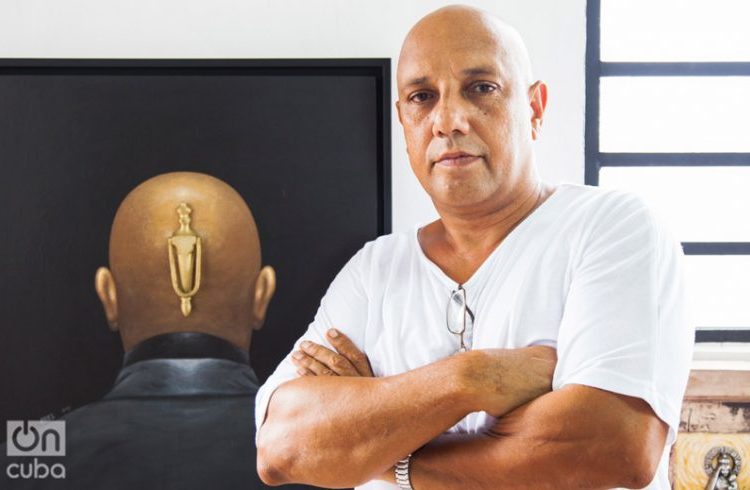 He is barely known as Arístides Esteban Hernández. If it is said that he is a psychiatrist by profession, he will surely be less known. But everything changes when people speak of Ares, his artistic name. Caricaturist, illustrator and self-taught painter, he has medicine and his specialty as essential tools in his work.

From his Centro Habana lookout point Ares contemplates the city. He dreams of cutting right off the building that prevents him, from his tower, to look at the sea. He interprets Havana and in each stroke of the scathing and precise pen is one of the best graphic humorists of our time. His work covers diverse manifestations because he is an inexorable painter, a magician of children’s illustration and a constant maker of books.

During his lifetime he has won more than 131 awards. He is the author of 21 books and another 80 bear his stamp as an illustrator, but he doesn’t keep count. He is an assiduous walker who doesn’t waste time and, despite the heat, during his walks he constantly asks questions to find the answers in art. One of them is how to create new permanent sites for Cuban graphic humor. The answer is a new space in Old Havana, in which he jointly works with the City Historian’s Office. Very close to the Cathedral three community projects merge in one same place, among them the Ares Studio: the humor house, which includes a place for a workshop, a gallery and he aspires to have a graphic humor library. Although there’s still much to be done, six expos have already been made in the Studio.

“What I have done are displays of graphic humor, among them one during the last Biennial devoted to caricatures in the Cuban press of the 1960s about Fidel, which was called “Alta fidelidad” (High Fidelity). We are promoting a theater workshop for this month and right now I have this exposition of caricatures about U.S. President Donald Trump,” says Ares.

“Agente Naranja” (Orange Agent) is the title of this display made up by 20 works by 13 Cuban caricaturists like Adalberto Linares, Ramiro Zardoya, Lázaro Miranda, Osmani Simancas and Ángel Boligán; together with two foreigners: Mexican Arturo Kemchis and Belgian O Sekoer.

“I invited two Cuban caricaturists who are working abroad: Simancas, who publishes in the Brazilian daily Journal a tarde and Ángel Boligán, who lives in Mexico where he works for El Universal. I also invited two foreign colleagues. I could have invited more of them but I wanted the caricatures made by Cubans to predominate.

“The idea was to make a graphic humor display with that theme, and afterwards I searched for the names of the artists. I thought that the title was rather original, but searching on the Internet I found that a rapper in the Grammy Awards had already called Trump Orange Agent. I used it because it is related to his position with respect to the environment and its conservation,” added the caricaturist.

Ares affirms that most of the caricatures are published in the printed media or on Internet sites related to graphic humor or to the press. None of his work is included because he was focused on the organization of the event.

He is a character that generates a great deal of news, some of course related to Cuba. Moreover, I found it easy to find several works about the same theme. I generally organize personal expos, but in this case it is collective. It seemed it was a theme with which a good exposition of this type could be achieved. I wanted to narrate a bit the way in which people have seen Trump’s presidential term until now and what view there is, based on Cuban caricature, of his administration.

Caricature is one of the expressions of journalism, and it is a very easy way of communicating and establishing an easier link with those who receive the message. The space is in an area where many young people as well as foreigners come together, and at times they don’t want to get involved in very profound things. That’s why to me it seemed the easiest way of communicating ideas and for people to see certain opinions or features of the Trump administration expressed through graphic humor.

How was the process of grouping together these works?

I still have a great many works that my colleagues sent me, but I had to make a selection. The work was agreeable because it made it possible to make visible that issue based on graphic humor inside the Ares Studio. The works are not literally taken from the media where they are published; some artists even worked specifically only for the exposition. Some were retaken by the artists and again worked for the expo.

It’s different to work the caricature for an expo because its natural space is that of the press, and it is an expression that emerges for it and is cavalcading between visual art and journalism, but linked to political events. But there’s no reason to restrict it just to the press. The way in which a caricature is received in an exposition is different to the way in which it is done in journalism.

In any case, the limits between caricature, painting, irony, satire or political commentary of the realities are not just linked in the caricature but rather they are mixed with other visual art expressions. That’s why I really like to take the caricature to an exhibition room and establish a different link with the public that receives it.

How has the expo been received?

I believe it has been rather liked. It has been well received; more than I thought, and the people have been interested about the subject, despite that it’s not the only one about Trump in the world. Many foreigners go by and especially the Americans like it a lot. I believe the expo can function well anywhere, here or over there in the United States, because it’s the vision of the caricaturists about a specific subject; in fact, the Cuban graphic humor work is well-known outside the island and there are many things that can be understood beyond our borders and in practice it has been demonstrated.

What role does graphic humor play within our reality?

The caricaturists keep abreast of what is happening in the world. The spaces for caricature are a great deal more now with the Internet and the Cubans are publishing in those spaces. There are places for criticism in graphic humor, especially to promote ideas, thinking, and that has to be taken advantage of.

Graphic humor has different lines and in all of them one can deal with our reality, one can speak about it and it is being done. The caricaturists take from it and therefore reflect it in their work. Graphic humor is also there to serve the people, to make them think, to reflect. That is their role: being the reality itself seen through the eyes of an artist.

What is the state of health of Cuban caricature today?

Caricature in Cuba has a very long tradition and has been linked to the media since the second half of the 19th century. It has had a long road with ups and downs, but with a maintained tradition and outstanding names. To speak of the current situation one has to mention the Special Period because a crisis in graphic humor took place because of the total absence of paper, of publications and of spaces for caricature. A great many artists stopped doing graphic humor and devoted themselves to other things within the visual arts and others left the country and continued working from there.

Actually that also affected graphic humor a great deal because new young people did not appear, but this situation started to improve a bit at the beginning of this century, when there is a discreet recovery of the publications or at least there was the intention of maintaining some important events for this manifestation. The appearance of young people has been a good symptom, which doesn’t mean that there still isn’t much to be done, like dealing with important subjects. Many artists wait for a subject to be dealt with to do so afterwards. We have to seek the subjects and express them.

How did Ares survive that period?

People sought a great deal of options to survive. At the beginning I tried to make caricatures in public places or things to sell, but afterwards I realized that if I continued along that way everything I had done would be wasted. I then decided to go through a bit of hardship and make a serious work.

I found spaces to do things outside Cuba and I participated in International Salons. I tried other visual art manifestations, especially with the illustration for children’s books and painting, and it went well, always maintaining the graphic humor, although in recent times I have left it a bit as well, because I’m involved in a new project. Actually now I am working more along the line of this new expo.

What will be your next work?

In the exposition I am proposing for next year I ask myself many things, I use the country’s symbols and the doorknockers to call attention and let people or myself enter somewhere. These new things of the caricature are outside of it, but not about humor, although mine is not about jokes or just for a laugh. I always propose based on a calmer humor, of searching, of thinking. My humor has always been serious, there’s where the psychiatrist comes out.

This project has to do with my barrio, which on occasions can be noisy and terrible but I like it. I was born here; the people know me and know where I live. It has to do with it, with Havana and with Cuba. I say that this is Havana’s Bronx, up there I have the Bronx’s lookout point and from there I think; this place inspires me. Neither am I going to get into a fight with Centro Habana.