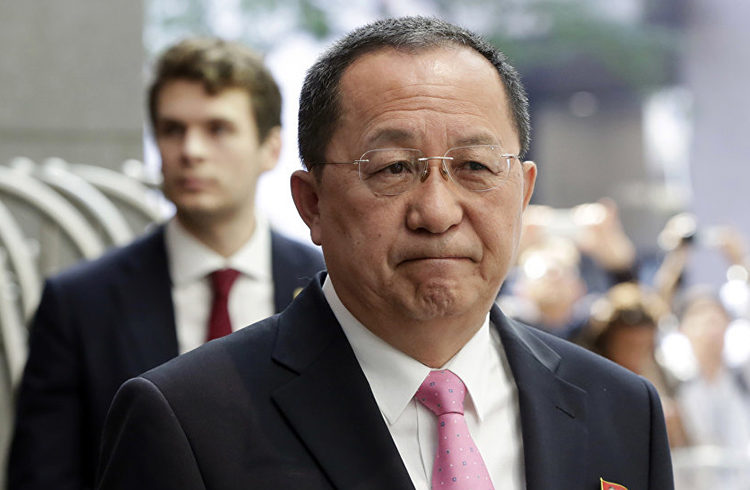 Cuban President Raúl Castro met this Friday in Havana with North Korean Foreign Minister Ri Su-yong, who passed on a “verbal message” from North Korean leader Kim Jong-un and his condolences for the first anniversary of the death of Fidel Castro.

The official note published in the Cuban press said that “both sides confirmed in the fraternal meeting the historical ties of friendship that exist between the two nations and they spoke about international matters of common interest.”

The information does not give details about “the verbal message” which the North Korean leader sent to Raúl Castro, who will end his term in office as the island’s president in 2018.

Last Wednesday Kim Jong-un held bilateral talks with his Cuban counterpart, Bruno Rodríguez – also present in this Friday’s meeting -, and both agreed to strengthen socialism despite the U.S. government pressures.

In addition, they condemned the recent sanctions of the Trump administration against both countries.

The United States this week included North Korea on the list of countries sponsoring terrorism, from which it had been taken out a decade ago, while it imposed new economic sanctions that affect its entire transportation sector.

Cuba formed part of that list until 2015, when it was excluded by the government of Barack Obama in the context of normalization of relations between both countries.

The Trump government had previously issued a travel warning for Americans, warning them about visiting Cuba due to the alleged acoustic attacks suffered by U.S. diplomats and their families in Havana, events which the Cuban government questions.

Cuba has condemned the “military exercises headed by the United States” close to the Korean Peninsula, although it did not mention the missile tests carried out by Pyongyang.

Canada in favor of Cuba’s mediation

Canadian prime Minister Justin Trudeau said on Thursday that he had spoken to Raúl Castro last year about the possibility of both countries working together to lower the international tensions with North Korea.

After his speech, in a session of questions and answers, Trudeau asked if they could transmit the messages through surprising channels.

Trudeau said that when he met President Raúl Castro last year it was a topic of the talks, and that this is the type of things that Canada can, he believes, play a role the United States has chosen to not assume during this last year.

He specified that Canada is interested in a different focus to that applied until now by the Donald Trump government, which combines sanctions, diplomatic pressure and military threats.

According to the Canadian prime minister, his government is interested in searching for solutions to the crisis because of regional security and because of the possible trajectory of the missiles.

He pointed out that if you look at the flight route, there are possible challenges for the North Korean intercontinental missiles that pass through Canadian territory.

Cuba and North Korea established diplomatic relations in 1960 and Cuban leader Fidel Castro – who passed away on November 25, 2016 – visited that country in 1986 and met at the time with its founder, Kim Il-sung, and his son and successor Kim Jong-il, grandfather and father, respectively, of the current North Korean president, Kim Jong-un.

At present the two countries have close relations and in 2015 Cuban first vice president and foreseeable successor of Raúl Castro, Miguel Díaz-Canel, was received by Kim Jong-un.

Although Cuba has an embassy in Pyongyang, it has greater commercial ties with South Korea, a country with which last year the commercial exchange amounted to 67 million dollars, as compared to the 9 million in trade with North Korea.