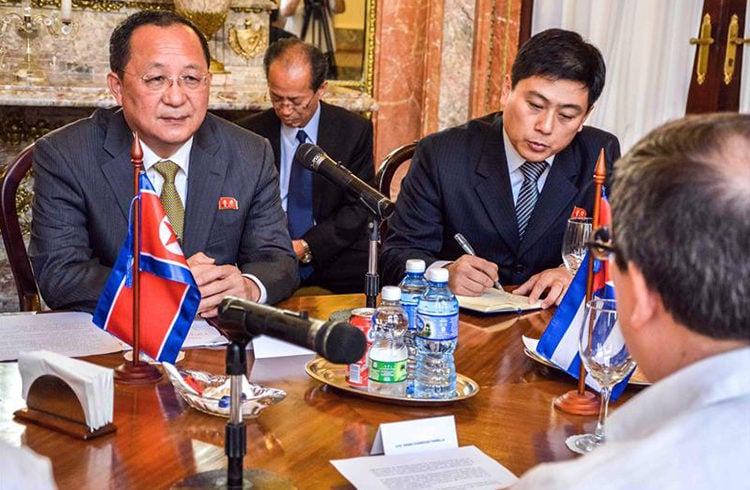 North Korean Foreign Minister Ri Su-yong (left) during his meeting with his Cuban counterpart, Bruno Rodríguez Parrilla (back), at the headquarters of the island’s Foreign Ministry. Photo: Yasiel Peña / EFE.

The Cuban and North Korean foreign ministers met this Wednesday in Havana, precisely at a time when both countries are living their greatest tensions with the United States in recent years.

The meeting formed part of the visit to the island by a North Korean delegation headed by Foreign Minister Ri Su-yong who, according to the international media, is seeking Cuba’s support in the face of the pressures by the United States and the international community for Pyongyang to stop its nuclear weapons program.

At the venue of the Cuban Foreign Ministry, Ri Su-yong and his Cuban counterpart Bruno Rodríguez talked about the current moment of bilateral relations and the recent sanctions imposed on the two countries by the Donald Trump government.

Both ministers rejected the U.S. “unilateral and arbitrary lists,” in reference to this week’s inclusion of North Korea on the list of countries sponsoring terrorism, from which it had been taken out a decade ago.

Iran, Syria and Sudan complete this list drawn up by the Department of State and which in the past included Iraq, Libya, Afghanistan and Cuba. The island was excluded from the list by the Obama administration in 2015 as part of the process of normalization of relations promoted at the time by both countries’ government.

In keeping with the traditional discourse of both governments, during the meeting both foreign ministers “demanded respect for sovereignty,” “territorial integrity” and “the non-intervention in internal affairs,” among other aspects, the Cuban Foreign Ministry note points out.

In addition, they showed concern over the situation in the Korean Peninsula “in the face of the escalation in tensions and the increase of military activity in the zone.”

“Only through dialogue and negotiations can a lasting political solution be achieved,” EFE news agency cited Bruno Rodríguez as saying.

Meanwhile, the North Korean foreign minister insisted on consolidating the socialist model despite the “U.S. pressure and cruel blockade.” He bet on the “exchange of opinions” for the “successful building” of that model.

Past and present of bilateral relations

Ri Su-yong’s visit to the island takes place at a time when the Cuban government is commemorating the first anniversary of the death of Fidel Castro, who passed away on November 25, 2016. The Cuban leader was remembered by the foreign ministers, along with the also deceased Kim Il-sung, North Korea’s first president.

Cuba and North Korea established bilateral relations in 1960, a year after the triumph of the Cuban Revolution. Fidel Castro visited the Asian nation in 1986 and met with Kim Il-sung, and his son and successor Kim Jong-il, grandfather and father, respectively, of the current North Korean president, Kim Jong-un.

Cuba has an embassy in North Korea and in 2015 Cuban First Vice President Miguel Díaz-Canel was received by Kim Jong-un in Pyongyang.

Diplomats cited by Reuters news agency pointed out that Cuba is one of the few countries that could convince North Korea to distance itself from the current confrontation with the United States which threatens with unleashing a war.

“We asked the Cubans several times if they could talk to them,” said an Asian diplomat.

However, the political ties are not reflected in the economic scenario. Cuba’s commercial relations with North Korea are considerably less than with its neighbor to the south. In 2016, trade with Seoul registered 67 million dollars while with Pyongyang it was barely 9 million dollars, according to Cuban government sources.