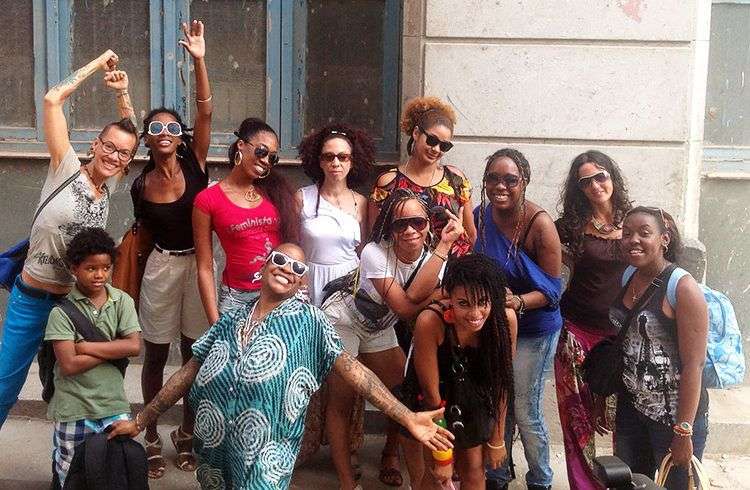 It is a fact that, as in other cultural movements, women have struggled to be recognized within the hip hop culture. It has worked as discrimination within another; first they are excluded by the musical genre – it is known that the disadvantage of rap and other manifestations of that culture relative to other musical variants and then they are discriminate because of their gender.

Perhaps many people allude as a reason the paradigm of masculinity within hip hop movement, despite being rebellious, in a sense reproduces hegemonic patterns.
The women participating in the hip hop movement in Cuba have faced both exclusions. However, in recent years, with the first steps of the female band Instintos, their contributions to hip hop in Cuba started to be seen.

Yamay Mejíias “Fina” Lourdes Suárez “La Cimarrona”, Las Krudas, Las Positivas, La Reina and La Real, are some of the main representatives of the rap in the country that take on the genre as a form of expression that transcends musical creation. Hip hop is a tool for them to debate and for the political and social activism.

In January 2014, the day of art and radical theory Contraxxyones: FeminisXs y Queeridad was held at the Juan Marinello Afro-Cuban Research Institute in Havana, conceived by historian and university professor Logbona Okulonee, also a member of the Cuban movement hip hop.

Artwoman is against homophobia, xenophobia, racism, sexism and all forms of violence.

This initiative was fundamental background to the first International Festival of Women Artists and Social Artivists in Cuba, Artwoman, to be held in Havana from December 12 to 14, 2014 aims to bring together artists, activists and researchers associated with the world of hip hop.

Projects En mi barrio and Somos mucho más are organizing the event that, according to the official announcement, “welcomes proposals in the performing arts, music, visual arts, literature, art and feminist activism.”

The Casa de la Poesia will host the festival which aims to “make visible the different forms of art and feminine discourse from a regulatory and non-Afro feminist position.”
Rappers, poets, writers and activists invite to work against the “invisibility, domestication of silence, violence and self-rejection that many women live in, whose artistic expressions have been confined to the world of crafts or rejected for not having an economic value in the Western patriarchal capitalist market, and / or be considered inferior to the art made by men; by their feminist political discourses, revolutionary, social demands; or not to be done by professional art schools and academies. ”

The academic meeting intends to address, among other themes, the role of art as a political tool of social transformation; feminist activism; survival strategies of artists and feminist art.