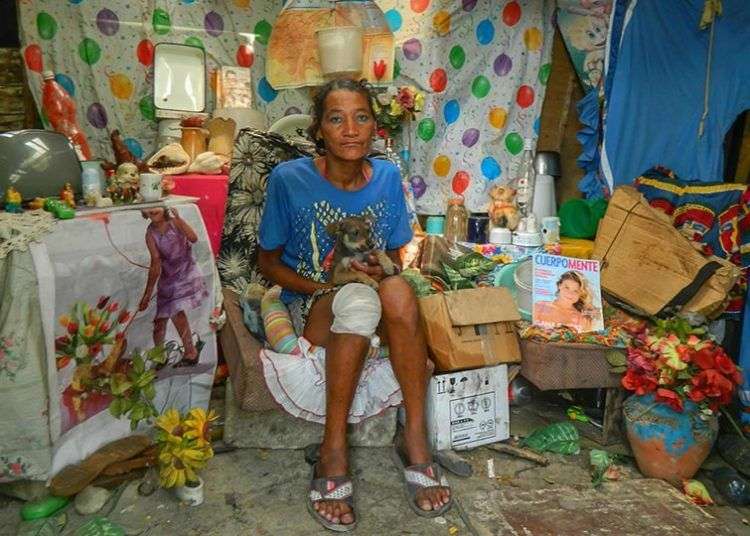 For ten years Luz Maria has lived at the foot of the largest landfill site in Havana called “Bote de Cien.”  She is tall and thin and now she seems the wake of the dancer in a site in decline. Ten years ago, when she no longer danced in the Tropicana cabaret, Luz Maria lifted some wooden boards, secured the ceiling pieces of cardboard and wood with beams, made a mattress with wagon wheels and old clothes, and settled in that cottage (a quimbo, as she calls it) full of old artifacts and clothes.

“I was told there was a place where they threw clothes and shoes and what I did not like I exchanged for rice and beans, and so I survived. My mom lived in Havana but I could not go to her house, so I said, I will build a small cottage here in the bush. My husband and I built it, but he caught on the ¨Bote¨ and they sent him to prison. ”

She innvites us to know the quimbo: a bottle, a pornographic magazine in the corner, keychain, a pacifier hanging from the ceiling, a broken bag, worn plastic flowers, everything that she has collected from the dump. “I found glasses, saucers, a picture of John Paul II, watches, gold chains, cell phones, and dolls. I like dolls, “she says.

Her is not the only quimbo, Chen lives in the other to the right of Luz Maria. There are not many around here, maybe two more. I wonder if there are not other people who want build one and Chen quickly: “No, no, no, no, no, no, no. We don’t even consider it. And if they build another, we knock it down, we are the authority here. In this place you can come visit, but many quimbos no, because then police comes here. ”

Chen has been for a couple of years living in that quimbo. Before he spent a year and a half above the dump, until police took the husband of Luz María away, so she asked him to build a quimbo nearby to make her company Now he says “bring me a cigarette, my baby,” and she fetches some old ones in her quimbo

When the truck to from the cigar factory comes, they get all over it. They try to never miss cigarettes and alcohol, which they sell it around. They buy, sometimes, some food, but take advantage of incoming trucks that bring and dispose of good bread, some heads or legs of pork or vegetables. Whatever is good they eat and the rest they sell as animal feed.

Chen prefers going up the Bote early. At that time the galleon-as they call the police, sometimes is not there, and this time they can see better, if they go up at night they have to walk with a lighter to search in the trash heaps.

Luz María hasn’t gone up these days because she has a very swollen belly. She recently carried five bags of clothes and she cannot do much weight after she was operated for appendicitis. She also has the scar in the belly left the twins she lost. But people come from Pinar del Rio and other provinces, and give her money for clothes she found and with that she manages to get by.

For too long they have lived in and out of the dump. Chen says that all the time in that place fires start due to substances given off by the decomposing garbage: “They have to take that boat away,” he adds, “it is in the middle of a capital city, they have to remove it.” And they take it away, have you thought about what you will do if they take away, I ask. “Go to the boat they bring, because that is where we must be. We are of this class, the lower class but honest, we’re in the trash class and I will die with this class. ”

Chen smokes a cigarette, passes to Luz Maria the alcohol bottle. She drinks, she returns it and asks us to apologize, then we can follow the conversation but now has some beans on the kitchen, it is getting dark and they have to eat, them and their dogs and white kitten. Today they have beans, and old hen, and some vegetables they  found in the boat. You see them satisfied.

"Una raza", a cultural bridge between the two shores